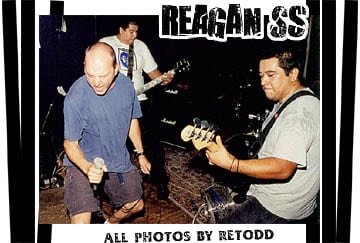 Reagan SS is warheaded by the ever-busy Matt Average, who puts out Engine Fanzine and runs Some Strange Music, one of the best distros for getting your mitts on choice hardcore. I've known Matt for years and he's always been an articulate, motivated, and artistically right-on guy. His roots and interest in true, unperverted fast music runs as deep as I've ever witnessed in anyone. To say he's a lifer who fled Oklahoma to be in the thick of the music that he loves doesn't quite sum it up, either. He's been bottling up his rage on a daily basis, and this band is the perfect release. There's one large element in Reagan SS that's missing in a lot of music today: pissed-off hate, heavy with heart, big on exploration. When Matt screams, Danny slices his guitar, and Apeface abuses his bass, it's not a show, per se, but a exorcising of demons. It's opening up the blast furnace to lives that are still living in the margins and being forced into uncomfortable situations. Their shows rarely last over fifteen minutes. They end drenched in sweat, and even solely by the power of the playing, it's hard not to feel tackled the entire time. Think back to the assault of Black Flag or N.O.T.A., where tough in punk didn't mean football tough, but a full frontal lashing back on all the things that never stop fucking with you. That's the power of Reagan SS.

Interview and photos by Todd Taylor

Parts of this interview were previously run in Thrasher Magazine. 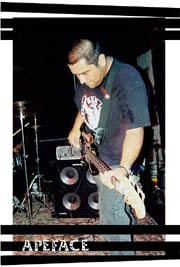 Todd: Where did the name Reagan SS come from?
Matt: I like historically significant names or names you can look up in an encyclopedia and reference.
Todd: Someone like Dorothy Hamill?
Matt: Or Mark Spitz, or the Kennedys. With the Dead Kennedys there's a historical significance to the word Kennedys. But I also want something that'll piss people off. The SS thing. This guy, Nate Wilson (ex-Devoid of Faith, Monster X), we hung out one time working together in Daytona Beach for Spring Break handing out promo items for web site. Nate kept saying he wanted to start a new band and everything was "We should start a band called Blaster SS or blah, blah, blah SS." Everything was SS.
Todd: To clarify, we're talking the specially trained World War II German SS (one branch was called the "Death's Head Organization") and not the Chevy Nova SS? Right?
Matt: Yeah.
Todd: I didn't know if you guys were specifically anti-Ford and pro-Chevy.
John: We want to be historically correct when we shock people.
Matt: We also wanted to start a band called "March 30, 1981," when Reagan got shot. I told Nate that and he said, "That name's too long." So then one morning, I was laying in bed. "Reagan SS." That was it. 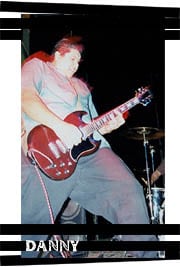 Todd: Are there any other SS bands that you know?
Matt: Dearborn SS, Crude SS, SSDecontrol, Hitler SS, Genocide SS, and I hear there is a band out there called Jesus SS.
Todd: Have any of your families been opposed to the SS in Reagan SS? Do they find it offensive or do they get the joke of it? Because Hitler probably would have wanted to kill all you guys.
Danny: I don't think my dad knows, but he's like, "What the fuck are you doing, playing in a band?"
John: My grandma, I always tell her the names of the bands I've been in, and she's like, "OK." And I told her about this one. She raised an eyebrow and thought, "You fuckin' idiot." She didn't say that, but the eye roll said volumes.
Apeface: My family doesn't care.
Matt: My family knows nothing about this. When I started doing fanzines in junior high, they flipped out. I was hiding all of my punk records and zines in really weird places in the closet because my mom would flip out. Even to this day, I don't tell her that I do a mailorder and a fanzine and I see punk shows. She doesn't know anything about that world. I just feel like I don't need to tell her anymore. I don't need to listen to it. I'm an adult now. I live halfway across the country. I used to buy Thrasher when it first started coming out and she was even upset with that because there'd be a punk picture somewhere in there.
Todd: What do you think drives you the most to be in this band? Would it be anger? Disillusionment?
John: All of the above and I think the most important aspect of this band is to play loud. Volume.
Apeface: And I'm bored. 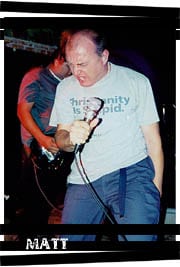