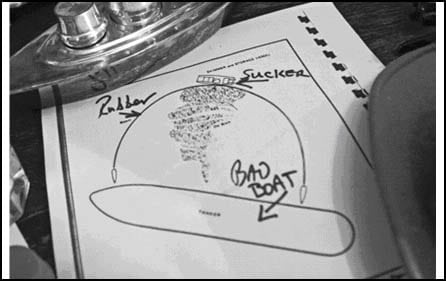 Read an excerpt from Greg Palast’s new book, Vultures’ Picnic: With an introduction by Chris Pepus

If you don’t read Greg Palast’s investigative reports, you don’t know what’s going on in America. Palast is the journalist who discovered election thefts in the U.S., the real reason behind Bush II’s invasion of Iraq, and other vital information on the class war that the rich wage every day.

In his new book, Vultures’ Picnic (released November 14), Palast presents the inside story of how the financial elite loots public treasuries and passes the bill on to you. He also writes about recent and upcoming environmental catastrophes. In this excerpt for Razorcake, the Palast team starts investigating the 2010 British Petroleum disaster in the Gulf of Mexico. They follow a trail of corporate-induced destruction that stretches back to another infamous case: the 1989 Exxon Valdez oil spill in Alaska.

The two-grand-a-night call girls are wandering lonely and disconsolate through the Wynn casino, victims of the recession. Badpenny [a member of the Palast investigative team], dressed full-on Bond Girl, is losing nickels in the slots and humming Elvis tunes.

Badpenny’s assigned job here is to look good and get information. She’s good at her job. A tipsy plaintiffs’ lawyer is telling her, “A woman as beautiful as you should be told she’s beautiful every five minutes.” His nose dips slowly toward her cleavage. I didn’t know there were guys who still talked like that. Well, good. Take notes, Penny.

My own assignment is to hook up with Daniel Becnel. Becnel is just about the best trial lawyer in the United States. He doesn’t have an office in Vegas or New York. He puts out his shingle at the ass end of Louisiana, at the far end of the bayous, where he defends Cajuns like himself, and that includes the wildcatters out on the GulfCoast oil rigs.

I have just come back from the Amazon jungle, where I was tracking Chevron’s operations. Chevron Petroleum monopolizes deepwater drilling in the Gulf of Mexico. Maybe Becnel and I could trade information. It’s April 20, 2010. Hitler’s birthday and my ex-wife’s.

I found Becnel—far from the gaming tables and looking unpleasantly sober.

There was an explosion back home. A rig blew out and was burning. The Coast Guard called him. They want his permission to open an emergency safety capsule they’d found floating in the Gulf. The Guard assumed maybe a dozen of his clients who had been working on the Deepwater Horizon platform were inside, cooked alive.

The sound on the TV above the bar is off. The high, black rolls of smoke rising out of the BP oil rig remind me of my own office when it burned.

Something is very wrong in this picture. All I can see are a couple of fireboats pointlessly shpritzing the methane-petroleum blaze with water. What the hell? Where are the Vikoma Ocean Packs and the RO-Boom? Where is the Sea Devil?

Here is a skyscraper on fire, and the firemen show up with two bottles of seltzer.

How could they do this? How could British Petroleum, the oil company with the green gas stations, with the solar panels on the cover of their annual report, that kissed environmental groups full on the mouth by breaking ranks with Exxon to decry global warming . . . how could Green BP savage and slime our precious GulfCoast?

The answer: BP had lots of practice.

By the next day, CNN’s Anderson Cooper and an entire flock of reporters ran down to the Gulf to take close-ups of greased birds and to interview that mush-mouthed fraud, Louisiana Governor Bobby Jindal.

But I know something the other reporters don’t know: The real story about the BP blowout is in the opposite direction, eight thousand miles north.

I have in my files a highly confidential four-volume investigation on the grounding of the Exxon Valdez in Alaska, written two decades ago. The report concluded,

“Despite the name ‘Exxon’ on the ship, the real culprit in destroying the coastline of Alaska is British Petroleum.”

I have a copy because I wrote it.

That was my last job. The job that defeated me: after years as a detective-economist, investigator of corporate fraud and racketeering, this was the case that ruined the game for me.

The important thing, the hidden story calling me north, is that the Deepwater Horizon disaster was born right there on the Alaska tanker route. Here’s why: BP did the crime but didn’t do the time. Exxon got away pretty cheap, sure, but BP walked away stone free, not one dime from its treasury, not one drop of oil blotting its green reputation. So I quit.

But for now, from the casino, Badpenny is booking me a flight on Alaska Airlines and calling around for a Cessna Apache to charter to the TatitlekVillage on BlighIsland. The network would have to trust me on this. I know that the key to exposing the cause of the Gulf spill is there in the TatitlekNativeVillage. I need to speak with Chief Kompkoff.

It was near midnight, starlit and clear. As the ship’s shadow loomed, the whole village joined him on the beach, wondering, What the hell?

Kompkoff told me he thought it was some kind of dumb-ass drill. Even a drunk couldn’t miss the turning halogen warning beam lighting up their faces every nine seconds.

It wasn’t a drill.

Now, don’t get the idea that these were just a bunch of dumb Indians stunned by the appearance of the white man’s supertanker. They didn’t have televisions, but they did have training in oil spill containment.

Containing an oil spill on water isn’t rocket science. Whether it’s a busted tanker or a blown well, you do two things: First you put a rubber skirt around it. The skirt is called a “boom”. Then you bring in a skimmer barge with a big sucker hose hanging off it and suck up the oil within the rubber corral; or you can sink it (“disperse” it with chemicals); or you tow it away and set it on fire. There are lunatic variants of course, most employed by BP. In 1967, the TorreyCanyon, in the English Channel, took a shortcut meant for fishing boats and broke up. It was the largest tanker spill ever. British Petroleum called in the Royal Air Force, which bombed the hell out of the slick as it floated across the Channel to France. The RAF was as effective on the floating oil as they are on the Taliban. Oil Slick: 1. RAF: 0.

Here’s a dirt-simple illustration of how you contain an oil slick from a busted tanker.

It’s roughly the same for a well blowout. You see in this photo a small cartoon tug dragging the rubber skirt, called a Vikoma Ocean Pack, around the ship, while the other little boat, a Sea Devil skimmer, sucks up the blotch, the floating oil.

Here’s the irony, or the crime, take your pick: I obtained this diagram from Alyeska, the company responsible for containing and cleaning up oil spills on Alaskan waters, no matter who owns the tanker. Alyeska is a combine of companies and the politically helpful cover name for its senior owner, British Petroleum. Exxon is junior. Some junior.

The tanker spill illustration is from the BP-Exxon official OSRP (Oil Spill Response Plan) for Prince William Sound, Alaska, published two years before the Exxon Valdez grounding at BlighIsland, Tatitlek. The oil companies’ top executives swore to this plan under oath before Congress.

It was, I admit, a beautiful plan.

It had everything: suckers and rubbers all over the place, and round-the-clock emergency crews ready to roll.

Simple simple: Surround with rubber and suck. The Tatitlek Natives could have done that lickety-split and you would have never heard of the Exxon Valdez.

But could have are the two most heartbreaking words in the English language.

The Natives were the firemen with the equipment. It was right in the plan. They just stood there. Why?

During my investigation right after the Exxon spill, Henry Makarka (“Little Bird”), the Eyak elder, flew me over to the village of Nuciiq, abandoned now. He told me, “I had to watch an otter rip out its own eyes trying to get out the oil.” Henry’s a sweet guy, eighty now. But in case I missed the point, he added, “If I had a machine gun, I’d kill every one of them white sons of bitches.”

I needed him to tell me straight, no BS, what the hell happened in those meetings between the Chugach chiefs and the oil company chiefs twenty years earlier, to back up my suspicions, or to tell me I had hit another dead end. It was not a conversation he was happy to have, especially with a bleached seal investigator.

The Eyak, Tatitlek, and other Chugach Natives have lived in the Sound for three thousand years, maybe more, the very last Americans to live off what they could catch, gather, hunt. It was March 24, four minutes after midnight, 1989, when Kompkoff witnessed the moment when three thousand years of Chugach history came to an end, the moment when Satan collected his due for the Natives’ complicity, especially Makarka’s.

Who are the vultures? Find out in this Palast report for the British Broadcasting Corporation: