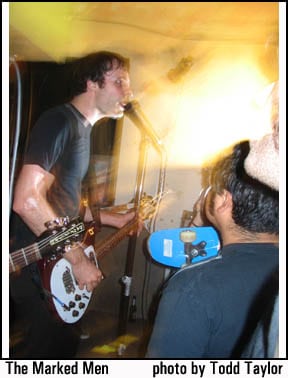 Razorcake Staff's Top 5s for Issue #33: This Is the Unabridged Version from That Issue

• Buddies, Pals and BFFs. Girl talk, dumb talk and punching each other. Laughing so hard our guts want to explode. I love ya’ll f’realz.

• Biking in Portland. To the Belmont library. To house shows or a corner booth at a bar. To cheap movies at the second-run theater.

• Beer. PBR and Sparks. With friends and strangers. With coozies and vomit. With dancing and passing out.

Top 5 T-shirts I Wore in the Last Two Months. (This was easy since I only wear 5 T-shirts. Thanks to Todd and Megan for pointing that out.)

5. Flipside, “Too stupid to quit, too high to care.” (This one has a picture of Wattie on it.)

1. The KISS coffeehouse. As if it isn’t bad enough seeing Starfuck’s descend like locusts upon the earth, KISS thought it would be grand to open a themed coffeehouse down in Myrtle Beach, So. Carolina (Yes, South Carolina). Quote Gene Simmons: “Every army needs food and drink and the KISS Army is no exception! Even the non-enlisted will find our treats and java rockin’ good!” I'll march right into that shop the minute I hear Gene’s wearing an apron and sweating it out. And let it be known that the phrase “rockin’ good” causes allergies to Art Fuentes and myself—we break out in severe punches. You’ve been warned.

2. The Ace ‘N’ the Box. (According to their web$ite): “The jack-in-the-box reinvented for a new world! Hit the button and overload your senses as the box pops open with an insanely detailed sculpture and slammin tunes! Ace Frehley plays “Shout It Out Loud” as he jumps out of his box.” I'm not in the two to three year age bracket, so I’m pretty sure my senses will not overload. How is something “insanely” detailed? Hand-painted by a serial killer? And fuck you, Gene, for making something as lame as this with Ace on it.

3. KISS cycling shirts. I know what you’re thinking: “Holy shit, those smanly-looking spandex/lycra shirts that some bicycle enthusiasts wear?” Yes, and now they’re made sporting KISS album covers. All the more reason for some people out there to fuck with cyclists that much more.

4. KISS Army leather vest. Oh my lord...you’ve got to get a load of this: “This awesome leather vest with the KISS Army logo emblazoned on the back will unquestionably show off your allegiance. Made from distressed leather and fully lined; every snap, zipper and rawhide trim adds to its unique, ‘worn for years’ look.” I forgot to mention that it’s going to cost you almost 400 American to show your gullibility, I mean, allegiance. Maybe Gene will give you an extra punch on your “buy 25, get one half-off card” if you’re seen wearing this at the coffeeshop, you ass.

5. I lied. There’s only four items on their list of regret. I wanted to use the 5th spot to wag the finger of shame at Gene for taxiderming the carcass formally known as KISS and taking it on tour. No Ace and no Peter equals something else besides KISS. How about renaming it “DOS” (with a lightening bolt “S”) as in dos original members of the band plodding on? Kind of like David Johansen & Sylvain Sylvain pushing on with The Two York Dolls. And for anyone muttering that I’m being too harsh, up your ass. I’ve been a fan of the ‘73-‘78 era of KISS since I was six years old and continue to fully back only the first six studio LPs and first two live rekkids. Everything else went down the crapper.

1. Bellrays at Beachland Bar in Cleveland

3. Pony Up!, Make Love to the Judges With Your Eyes

3. Dirtbombs, “All My Friends”

1. Pedro punks drinking all the booze at the Toys That Kill record release party.

2. Dave Guthrie pogoing to the new Riverboat Gamblers record at his own wedding.

4. The psychobillly dude from Rigor Mortis who gave my truck’s dead battery a jump at Union Station.

5. Rumors of a Blood Bath and Beyond tour on MySpace.

• Bloodhag, “Hell Bent for Letters”: Righteous racket in reverence to the written word.

• Killing Joke, “Hosanna’s from the Basements of Hell”: A well placed steel-toe to the eardrum.

• 6/6/06: Like getting a second Halloween this year, but without annoying midgets extorting candy.

• Lemuria/Kind Of Like Spitting, You’re Living Room’s All Over Me

• Modern Machines, Take It, Somebody!

• None More Black, This Is Satire

1. The Swallows have come home to make bird babies. So faithful.

2. My boy got choked out. Marcus Aurelio beat Takanori Gomi.

3. The Bronx residency at Spaceland. (free!!)

3. Angry Samoans, Back from Samoa LP

4. Various songs by the Bloodbats

• Fuckboyz, Will You Still Love Me Tomorrow

• Modern Machines, Take It, Somebody!

• Drive By Truckers, Blessing and A Curse CD

1. The Flash Express and Andre Williams @ Spaceland (5/6). Flash Express is one of the only bands in Los Angeles—or anywhere—who know the meaning of showmanship. I mean, who would’ve thought...great music, talented musicians, smooth moves, ACTUAL ENTERTAINMENT? Yes, sometimes it happens. Oh, Andre tongue kissed the girl standing next to me. Luckily, I just got a peck on the cheek.

2. Smiths Night at Part Time Punks (5/21). Heterosexual guys with ironic haircuts trying to pick up girls by dancing like Morrissey. Better than any gay bar I have ever been to in my life.

3. “We’re Gonna be Timeless,” Mondays 8-10pm (Pacific Standard Time) on www.littleradio.com. Sharif wears fantastic sparkly scarves and dresses like a male Stevie Nicks. And he is one of the most talented motherfuckers I know. Listen to his show.

4. Midlife Crisis at 30 by Lia Macko and Kerry Rubin. So I am only 27, but I still found this book really helpful. It’s actually just more reinforcement for the fact that as women right now, our mother’s generation fucked us up...but in a really surprising way which is the opposite of what you think is the norm. An interesting sociological look at the downside of being a successful women in the world today.

5. Me moving to San Francisco—Thank you Los Angeles. It’s been real. It’s been fun. But it hasn’t been both...

5. Don’t Knock The Rock Film/Music Festival, June 29-July 3rd at the Redcat at the Disney Concert Hall in downtown L.A. This film/music festival brought to you by Allison Anders of Mi Vida Loca and Gas, Food Lodging fame. Features Ghost On The Highway: A Portrait Of Jeffrey Lee Pierce And The Gun Club, You’re Gonna Miss Me: The Roky Erikson Story, special preview screening: The Monks: Transatlantic Feedback, The Treasures Of Long Gone John, We Jam Econo (The Story Of The Minutemen). As if that wasn’t record geek ejaculation worthy enough, a rare performance of original Gun Club members Terry Graham, Ward Dotson and Kid Congo Powers and special guests, Redd Kross-the 1987 Neurotica line up, The Fucking Champs, Anders & Woods and a few more kick ass noisemakers I’m sure.

4. August 3rd, of course the next GirlSSkool with the Clorox Girls (back in L.A. after two years!), The Atoms, and more at Little Pedro’s (which I officially deem the lady’s room at LP to be the new celebrity photo booth—Jane Weidlin and Meg White in the same fucken’ week)...get ready to rock your titties.

3. Savage Republic, The Chairs Of Perception (Urinals), Amps For Christ at Safari Sam’s, June 3rd. You’ll probably see a review of this show by the time you read this but, man what a line up!

2. July 9th, Quintron and Miss Pussycat at The Echo/Part Time Punks. Man, Benny and Mike have been putting on some right on shows lately. Part Time is the post-punk place to be. Alan McGhee spins here. Indian Jewelry broke out here. Now they honor us with Quintron—he whose Hammond B2000 can sing the depths of our hopes and sorrow.

2. The Queers, Love Songs For the Retarded

• Rollergirls (in competition with Breaking Bonaduce, Dog: Bounty Hunter and I’m with Busey for best reality TV series ever.)

• Osaka Popstar and the American Legends of Punk, Self-titled

• Masters of Horror: Cigarette Burns, breathtaking and inarguably John Carpenter’s best work since In the Mouth of Madness

5. Dick and Jasper of Citizen Fish

2. Modern Machines, Take it, Somebody!

5. The Ergs, Art of the Underground Singles Series #8

4. The Tough and Lovely, Born of the Stars LP

3. Being back in America, land of REAL truck stops!

4. Being back in Wisconsin, land of REAL cheese and beer!

3. The Fall at the Knitting Factory

3. The Gories on You Tube

• Tranzmitors, Some Girls b/w Dancing in the Front Row 7”