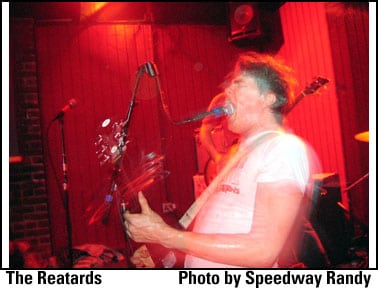 Few people were as desperate as Jay Reatard. Raised in Memphis, he seemed to embody what makes great music – intense frustration. Starting in his bedroom with a 3-track (4th track broken), screaming, playing guitar and hitting buckets, yelling about being a fashion victim, no one cared about what that tape recorded as it was spinning.

Jay had his heroes, like The Oblivians, resident legends of garage punk, a scene that’s fun and vibrant, but not that popular in America either. And Jay had his other driving forces, like being poor and uncool at school, called a "retard" by other kids. So Jay did what every kid should do: channel society’s bullshit into creativity. Jimmy Lee Lindsey Jr. became Jay Reatard, ripping guitars up and tearing clubs down. He got known as a juggernaut in the punk scene. That is, the punk scene that actually plays on the floor at a party, at a club for fifty people, with handmade record covers and shirts, hoping the van doesn’t break down and stop the tour. The scene where the band sits at the bar with everyone else, watching the other bands play.

Jay’s bands did what they set out to do. The Reatards were plied fuzz as a frenemy, getting too drunk to perform and then giving the best, most inspired performance every night, destroying shit and bleeding, meanwhile making some of the most anxious, exciting rock’n’roll you’ll find from the 1990s. The Lost Sounds took that anxious rock energy and wrapped it up with gloom and doom new wave, pushing expectations of that music, slowing way down and getting dark, speeding up and screaming to get the bad stuff out of their system—like it might be the last transmission to another planet—saying “stay away.” A reunion Reatards tour provided just as destructive and exciting as the early years. While on the same tour, Jay’s other band, the Angry Angles, stripped down and pushed the minimalism and angular rhythms with a catchy force.

What helped Jay was being part of an amazing music scene in Memphis and surrounding cities like Atlanta, with loads of interesting people putting out great music. His best friend RyanRousseau was a huge part of Jay’s music and life, playing in The Reatards the whole way, and doing his own great thing with The Wongs, Destruction Unit, Tokyo Electron, and now Earthmen And Strangers. Alicja Trout was the other non-stop energy in The Lost Sounds, and powers her bands Mouserocket, River City Tanlines, and Black Sunday. Alix from the Lids and Angry Angles ran Shattered Records with Jay, there is the great post-Oblivian work Greg, Jack, and Eric have done, there’s The Carbonas, The Final Solutions, new kids like The Oscars, the list goes on and on. Not to mention the importance of Eric Friedl and Zac Ives’ Goner Records, a label and store, the fucking Capital building of Memphis. Jay was the monster child and the close scene around him gave him fuel, probably with a lot of good and bad things happening personally.

As the Angles broke down as fast as they started up, Jay finally took the music he was making and just put his own name on it. Suddenly, people outside of our garages took notice. Someone close to Jay would have to explain why: if it was just timing and luck, or Jay and his record labels pushed everything the right way. But with Blood Visions (2006, In The Red), more and more people started hearing about Jay and his “debut” album. More great singles came out from In The Red, then Matador picked Jay up. Jay was profiled in bigass magazines and recognition came from the New York Times.

I’m not saying that new popularity is good or bad; it’s all specific to the individual. All music scenes have a lot of issues around a band’s motivating force. If a big label is putting out your music, then at least some money is coming your way, and the worry is the band might start doing it for the money and stop being creative.

For me, Jay never stopped creating good music. Although he was reaching thirty and people everywhere now cared, Jay still wrote and performed like it was that 3-track cassette running in the bedroom. For more than a decade Jay put out rad song after song, record after record, and toured non-stop. More people started to notice, but I always liked the songs.

This podcast intro got long, but Jay is worth talking about. We focused on doing a variety of his bands and some older stuff.