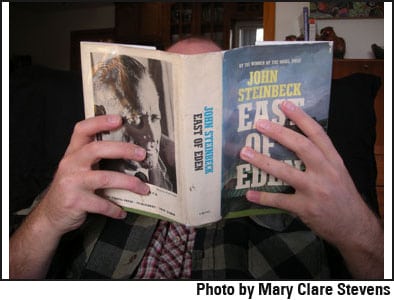 This is the second time in my life where I can pinpoint bad posture and over-work tipping to my advantage. I was slumped over in my comfy chair and just staring at my torso. I was too pooped to really think. I was just staring; concentrating on blinking. We’d just finished another issue. My brain was warped. I had on a Blöödhag shirt. It’s one that appropriated the Motörhead bastard, but in their design, the horns of the beast were piercing through a Michael Moorcock paperback, The Eternal Champion. Being that I was almost finished with the book I was reading, I padded over to the computer and put the Eternal Champion on hold in the Los Angeles public library’s system.

In the two weeks I waited for the book, I got to thinking about how I’ve looked into new authors. The most reliable is long-time friends and their recommendations.  I read a lot. I’m pliable. I’m willing to take the suggestion of a T-shirt of a band I like. Then I realized that punk rock, in subtle and not-so-subtle ways, has guided my reading, too. And that was the genesis of this podcast: books and authors, all found through punk. The songs are played chronologically, by release date. Footnotes follow the track listing.

X, “Adult Books”
1978. Los Angeles’s X always fashioned themselves as smart punks. Their first four albums—Los Angeles, Under a Big Black Sun, Wild Gift, and More Fun in the New World—are all worth seeking out. This was a rough mix for their Dangerhouse single. I have to get over the fact that every time I’ve met Exene—even shared reading bills with her—that she’s been nothing but snooty and dismissive to me. But I like spending time with X’s songs, though. That’s for sure.

Dicks, “Saturday Night at the Bookstore”
1980. With the line about “falling in love with a glory hole,” I don’t think Gary Floyd’s singing about the library…. Maybe I’m just not using the right Dewey Decimal System. This was originally on the split with the Big Boys, Recorded Live at Raul’s Club. Any early ‘80s Texas hardcore from Really Red to Scratch Acid to the Mydolls? Sign me up.

Ramones, “Pet Semetary”
1989. Intentionally mis-spelled, Steven King, a self-professed Ramones freak, commissioned the Ramones to do the title song for the film adaptation of his novel. It was one of Dee Dee’s last songs written for the Ramones, and showed up on Brain Drain. It’s Designated Dale-approved and he’d whack me in the skull with his commemorative, tiny Beat on the Brat baseball bat if I didn’t include the Ramones in this lineup.

Pogues, “Down All the Days”
1989. I went to a college that was a safe harbor for a lot of trust fund hippies. This did not sit well with me, so I spent a lot of time in my Walkman. I’m no richie and didn’t have a lot of tapes. CDs were still about $20 a pop. In 1990, I must’ve listened to Peace and Love a thousand times. On the other side of the tape was the Pixies’ Surfer Rosa. This song starts and ends with typewriter sound bites. Patron saint Shane MacGowan also sings, “the tap, tap, tapping of the typewriter,” during it. The dude on the cover of this album has eleven knuckles, which is a boon for a boxer. New to the Pogues? Go for Rum, Sodomy, and the Lash and branch out from there.

Jawbreaker, “Boxcar”
1994. I’m very cautious with the cult of Jawbreaker. It’s a tad creepy, a tad too starter-punk nowadays, but I still listen, with caution. This is the third song on 24 Hour Revenge Therapy, my favorite tip-to-tail Jawbreaker album. Your results may vary. I always thought the lines “You don’t know what I’m all about. Like killing cops and reading Kerouac” were a bit toughguy for the San Francisco power trio. Shit, man, replace “killing” to “fleeing,” and I’m with you. My two cents is skip On the Road’s overhyped jive and hit the books with The Subterraneans.

Bad Religion, “Stranger Than Fiction”
1994. Late in high school and early in college, Bad Religion were one of the few in-real-time, nationwide-punk bands. In the late ‘80s, they may have been stars in California, but in rural Arizona, they were still on the fringe of music consciousness. I got to interview one of the fathers of thesaurus punk, lead singer Greg Graffin once. He signed my Webster’s New Universal Unabridged Dictionary. “Stranger Than Fiction” is the song I totally called out that he made up a word for, and he agreed: “Caringosity.” Whatever it is, it kills the Kerouac cat in this song.

Cleveland Bound Death Sentence, “Between the Lions”
1997. Minneapolis. The song title references the stairs leading up to a library, guarded on each side by a marble lion. A song that has four of its own footnotes? Book it. Names referenced in this song? Alfred Kazin, Leon Trotsky, William Saroyan, and Truman Capote. Aaron Cometbus reads and it shows. Trotsky’s official Soviet remembrance was fundamentally erased by Stalin within three years of his being ousted from Russia. He fled, became friends with Frida Kahlo and Diego Rivera, then was assassinated.

The Weakerthans, “Anchorless”
1997. The Weakerthans were quieter and more poetic than most of the punk I was listening to at the time, but they grew on me. It’s sort of like how the Evens are to Fugazi, The Weakerthans are to Propagandhi. Slow embers burn with the lines “Got you P.G. Wodehouse novels and your telephone,” ending with “Anchorless in the small town that you lived and died in,” resonated with me. I’d never lived in a town larger than 40,000 people before relocating to Los Angeles. This record hit me at the perfect time.

Hot Water Music, “Things on a Dashboard”
1997. Hot Water Music got their name from a Bukowski book. It’s a much better name for a band than The Rooming House Madrigals or Septuagenarian Stew would have been. I usually steer fairly clear of Bukowski worship (but, when Bukowski is on, he’s unstoppable), and Hot Water Music, thankfully, aren’t making songs about horse tracks, horrible relationships, and alcoholism. Two quick things. This song is on an 8 ½” split with Clairmel. Their other song is “Elektra,” about the band being sued by another band named Hot Water Music. The good dudes won out on this one. Second thing: Bukowski and D. Boon of the Minutemen are buried about two hundred yards apart from one another.

Blöödhag, “Michael Moorcock”
1997. Literally could play any song by this North West EduCore band. Each and every one of their songs is a biography of a science fiction author. This is one of my favorites. It’s off the Dewey Decibel System 7”EP. I just finished The Eternal Champion by Michael Moorcock. Hmmm. For a dude who harps on Tolkien, it’s a little too elfin magic for me. But, he did tour with Hawkwind and got high with Lemmy, so there’s some balance sheet in that multiverse. As an aside, I still apologize to Blöödhag for mis-spelling the name of the most literate band we’ve ever had on the cover. Blööhag? Me dumb. The graphics look fuckin’ cool, though.

Kid Dynamite, “Bookworm”
1998. Philly dudes putting the melody back into hardcore, a feat of almost inestimable difficulty in 1998. The world was hip-deep in chugga-chugga murdercore or NOFX clones. No matter how fast Kid Dynamite goes, lead singer Jason Shevchuk e-nun-ciates, Dr. Dan Yemin received his Ph.D., and we’re left with these lines that always stuck: “She said she wanted to know me like a book. I was out of there fast, remembering all the time that it took to get over the source of all the times that I felt dead.”

Dillinger Four, “doublewhiskeycokenoice”
1998. Dillinger Four were a revelation for me. I was working 60-70 hour weeks at Flipside, just churning, churning, churning. Like a bolt from the blue, a band—that had been panned several times in Flipside—spoke to me. They were the band I was hoping existed: smart dudes, hearty partiers, rustbelt poetic lyrics, layered songs. Numerous interviews and hundreds of photographs later, I’m proud to consider these guys my friends. The line “Nelson Algren came to me and said celebrate the ugly things,” changed my life in that I’d been steered to one of my favorite writers of all time. Reading suggestion: The Man with the Golden Arm. (No, not a 007 yarn.)  The movie’s not so good, though. Different ending.

Egghead, “Books”
1999. In high school, the sexiest thing that a woman could have said to me would be, “Let’s take our clothes off and talk about books.” That never happened, but Egghead sung it ten years after I graduated. Egghead, I met through books, literally. Mike Faloon did a reading tour with Razorcake co-founder Sean Carswell. They got along so well that Mike and I also did a couple of tours, the most recent being the triumphant “Geek and Dork Tour” with Jennifer Whiteford. These tours are thinly veiled excuses to hang out with great friends for a week or two at a time. Egghead just played our local skatepark and practiced their heckling. They more than held their own with the local shredders.

Descendents, “Mass Nerder”
2002. I’ve always thought the Descendents were woefully underrated and overlooked at how influential they are. It’s not an act. They’re geeks and nerds, and in lesser hands, the lines “Gonna kick their asses in class/ Gonna get good grades/ We must read” would have sounded Back to School Special-ist instead of a barn burning. I like to think of them as the “Charles Atlas of the frontal lobe” punk rock.

Rivethead, “Avoidance Learning”
2003. A band named after the highly recommended book of the same name by Ben Hamper. The book is one of the most compelling reads dealing with the deadening affects of working in a car-making factory. Great book. Great band. I was once on Naked Rob’s radio show in Sacramento, had a copy of this from the band, and, wouldn’t you know it, almost three FCC-unapproved “motherfucker”s in a row on the first track. Still feel for bad for that, but it won’t stop me from playing it here.

Riverboat Gamblers, “Black Nothing of a Cat”
2006. You may feel like arguing that the line, “Gotta backpack full of comics and a condom in my wallet and I don’t need another comment about not using it yet,” is a stretch for being book-related, but growing up with my brother who obsessed over Sgt. Rock, G.I. Joe, and Fightin’ Army comics, books is books, man, whether they’ve got pictures or not. Read Blade of the Immortal and tell me I’m fibbin’.

Todd Congelliere, “Too Many Choices”
2008. Todd’s one of the backbones to Southern California’s DIY punk. Not only does he run Recess Records, he’s been a guiding hand in FYP, Toys That Kill, and Underground Railroad To Candyland. This song was released by Half Pint, formerly of Rivethead. Half Pint loves Steinbeck. I do, too. I voted for Steinbeck in the last presidential election (write-in candidate. Obama had California’s electoral vote and I wasn’t going to waste mine). Half Pint named his record company “Ol’ Tennis Shoes,” which is the hooch that Doc and the rest of Cannery Row get from Lee Chong’s store. I suggest Steinbeck’s entire canon, but if you’re new, try the Tortilla Flat, Cannery Row, and Sweet Thursday trilogy.