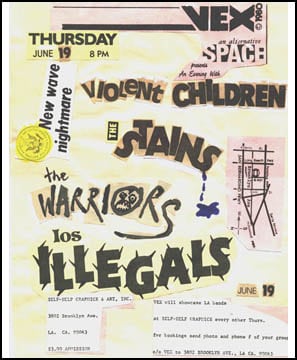 Punk was very regional when I first got into it and I had it drummed in my noggin early on that you put your best effort into supporting your home scene first. While it’s been a while since I’ve even attended, played or put on a backyard gig, I do try my best to keep up with what’s going on in the neighborhoods, so let this two-part podcast serve as part of my continuing support for the home teams.

I played a bit fast and loose with borders, and the track chronologies are occasionally fudged to give preference to rarities and better sounding recordings over adhering to precise release/recording order. That said, the podcasts do follow a chronology of sorts, with bands mostly active during the early/mid-80s comprising the first podcast and bands from the mid-80s to the present making up the second. Heartfelt thanks to Joe Stumble @ Last Days of Man on Earth Blog, Mike Guerrero (East Side Punks Por Vida!), Pat Houdek  from Chicago’s P&S Productions, Cyco Mike from LRU/Oppressed Logic, and Rob from The PINs for contributing some of the tracks.

Part One Notes:
Brat/Illegals/Oddsquad: Books have come out over the years promulgating a version of history where it appears these three bands were are the only punk/new wave groups to come out of East L.A. I think all three are great in their own unique way, and anyone who’s been reading this magazine for most its existence knows I’ve already authored rather extensive interviews with two of them. The reason they’re grouped here at the beginning is to begin where the aforementioned books end and highlight everything else their authors have either missed or chosen to exclude.

Thee Undertakers: One of the other so-called “Vex” bands that formed before that club opened and played all over the county, yet seems to rarely make it into the annals of history. This is from the album they recorded in 1981 but wasn’t released until a few years ago. They reformed a few years ago and though Tracy and Tony now dedicate most of their time to the Wooly Bandits and Media Blitz, respectively, the band remains semi-active.

The Stains: Founded around 1976/77, they are considered by many to be one of East L.A.’s first, best known, and most criminally overlooked punk bands. This 1989 recording is of an older tune written by their original bassist Jesse Fixx, who passed away in December of 2008. They have also reformed and are playing around town, so be sure and check them out because their live sets are still something to behold.

Violent Children: A Stains offshoot that played on a few bills at the Vex early on. I pilfered this song from the Myspace page for Sludge, the band VC lead singer Tracy fronted in the mid-80s.

Dog’s Breakfast/No Mind Asylum/Hawaii’s Hardcore: Three early punk/hardcore bands from Highland Park featuring Shane White of Rip Offs fame playing bass. Dog’s Breakfast also featured his brother and Rip Offs drummer Jason in the ranks, and Hawaii’s Hardcore had Joe Henderson, of Ink Disease and Flipside Fanzine fame, on vocals. All three tracks were recorded either in a bedroom or garage, so those familiar with his later work can take this as proof that “budget rock” was a way of life long before any of us had heard of Billy Childish.

Butt Acne: An early recording of the band my brother and I started in late ’81. I’m fairly certain this is from the 1982 “Human Retch” period of the band based on the fact that this is recorded with the acoustic guitar/movie projector setup, but it was surely not recorded any later than spring 1983 when the name was changed to Six Gun Justice and we got a drummer and our hands on bona fide electric instruments.

Circle One: The pride of Pico Rivera, they are another legendary linchpin hardcore band responsible for PUNX Productions, gigs at the T-Bird Rollerdome the Wig Factory and the subject of much controversy and many tales. They also reformed a few years ago and recently released a new full-length on Artifix Records.

Crankshaft: Hailing from the Highland Park/Mid-City area, they featured prominently on a number of now-classic compilations and were a house band of sorts at Hollywood’s Cathay de Grande. Singer Lino Lousy is currently doing a long, um, vacation stretch upstate, but some of his band mates have a Myspace page up for the band with pics and stories.

A.D. Do: A band put together by Morgan Hunt and Benny Siegel, who were also responsible for the short-lived but always awesome Multiplication of the Typical Joe Fanzine. Morgan is now living in Arcata and was drumming for Forced Failure until recently, and Benny popped up in the extras of a Skulls DVD I was watching a few years ago.

Looters: The lineup, comprised of the Alvarado and White brothers (and Tony Quan on drums after Jason quit), lasted from 1985 to maybe late 1986, and the number of gigs we played can be counted on one hand, but it served as a starting point for what we all did separately later on. This slower tune from the set shows off a bit of the band’s Flipper/lysergic influence.

Moral Decay/Black Jax: Two more woefully underrepresented bands hailing from Monterey Park/Alhambra. Moral Decay featured two Angry Samoans in their ranks, as well as drummer extraordinaire Scott Matsuda, who also did time in Crankshaft, UXA, Black Jax, Thee Undertakers, Porch Kickers and many others.  Both bands also featured the late, great Gary Pogo on vocals, who fronted a number of Black Jax lineups well into the 1990s. “Holly,” a love song for a blow up doll, shows that under their gruff exterior, the dudes in the Black Jax had a wicked sense of humor. Rumor is bassist James Lerie is working on a new Black Jax lineup.

Bloodcum/FCDN Tormentor: By the mid-80s, the speed metal influence of bands like Slayer and Metallica started creeping into the backyards and soon the punk bands found themselves sharing bills with guys that had longer hair, played faster and sang about Satan instead of anarchy. Huntington Park’s Bloodcum adeptly straddled both sides of the fence, melding Slayer’s template with punk’s obnoxious sensibilities. Tormentor were one of the earliest examples I personally ever heard of what was later called “black metal,” taking speed and Satanic lyricism to extremes. Tormentor’s drummer Ralo went on to proto-grindcore band No Comment and most recently plays with Ollin, a band up to its eyeballs in old East Side punkers. Bloodcum’s Robert Tovar spent the '90s in Blues Experiment, bassist John Araya (yes, Tom’s brother) is now in Thine Eyes Bleed and guitarist George Hierro was in another band with assorted Tormentor members before he and Robert reformed Bloodcum a few years ago and have been playing around town ever since.