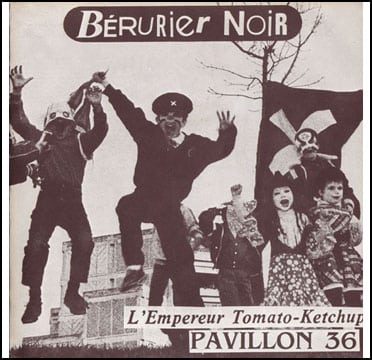 Howdy all. Here’s a new podcast with a gaggle of songs that have been occupying mental space in my head lately. There was no conscious theme going on when I was assembling this play list, but after playing it back I realized that if anything’s tying all these songs together it’s how eclectic sounding this ended up. There’s something to be said for sounds that push in unexpected directions (and not in that masturbatory “I’m a serious musician (i.e. asshole in tight pants) and love listening to 5 minute solos” type way). It’s what makes listening to music stay exciting. Some of these songs are happy, some are depressing and reflective, and some should cause spontaneous dancing.

Berurier Noir “L'Empereur Tomato-Ketchup” – When the lyrics are translated, this is roughly a song about kids taking over society and establishing a joyous anarchy. That makes sense considering this band is a French anarchist group who started up sometime in the ‘80s. The first thing I heard from these guys was their Macadam Massacre album which is some of the most minimalist punk I’ve ever heard, yet somehow still deliriously catchy. The band, who is essentially two people, Loran (guitar) and François (vocals), somehow built on their base of a drum machine and ultra-simple riffs, to create what sounds like massively joyful, demented, ultra political, circus music that needs to be the soundtrack to any worthwhile revolution. Look up the videos of them playing in Quebec in 2004. If that doesn’t blow your mind, you must be dead.

Titus Andronicus “Titus Andronicus” – A friend of mine turned me on to these guys at the end of last year, and I have to say that their Airing of Grievances album might be one of the best albums I’ve heard from last year. It’s like the sound of really good indie rock band having a nervous breakdown and somehow channeling it all onto record. This song “Titus Andronicus” is my favorite off the album. The happy sing-along “your life is over” that basically comprises the last half of the song is one of the happiest and catchiest representations of existential crisis I’ve heard in a while.

Swans “Failure” – This is just a really sad, pretty song about failure. I think that it’s a subject most people can relate to at some point. I really would like to check out more Swans but it seems like their stuff is so scattered both in stylistically and in terms of availability that it’s hard to decide where I should dip in next. A band that can do both beautiful atmospheric songs of Gothic Americana and mega abrasive noise workouts has my approval.

Man At Arms “Everything Is Getting Better/Worse” – This band has that weird arrhythmic yet sorta danceable quality that bands like Devo and the Minutemen excelled. I really like the frantic dual vocals at the end of the song.

Any Three Initials “Love Story” – A band featuring Will Shatter from Flipper right before he OD’d. This song is essentially a spoken word piece threatening to break into a blues song for its first half, before it just finally bursts all over the place in a rather glorious mess of noise and Will Shatter vocals. In a word it is amazing. I’m not sure if this album, Ruins of America, was every officially released, but some sleuthing on the internet can turn up a copy if you’re persistent, and it’s well worth it.

Le Volume Etait Au Maximum “Just Like Paradise” – When I picked this song from their album, Les Vacances, I didn’t realize it was a cover of a David “Diamond Dave” Lee Wroth solo track. I mostly chose this song because it was one of like three songs on the CD that was in English. I really like how this band does big huge sounding power pop in the best Brian Wilson tradition, but you know French-Canadianified.

The Terminals “Wild Bill's Social Club” – I’ve had this album for a couple years, and man is it good. This song is what should be played at a totally awesome dance at a swampy roadhouse if I had my way.

Burn Witch Burn “Night of 100 Popes” – This band is a project of Rodney Anonymous of the Dead Milkmen. While the Milkmen always had a folkiness to them, it’s nothing like the full blown Celtic-Americana-Gothic-bluegrass, acoustic, folk that Burn Witch Burn did. The band did this sound amazingly well, with lyrics going all the way from Milkmen-like goofy to really dark in that way a lot of folk music tended to be. There’s not a bad track on either the bands EP or full length. Both of these albums are massively out of print so I think your best bet is either used bin or internet.

Star Fucking Hipsters “The Path is Paved” – Until We’re Dead was one of my top albums I heard from last year. This band most prominently has Stza from Leftover Crack and Choking Victim. Most of the songs feature dual male/female vocals between Stza and Nico de Gallo from a band called the Degenerics. The album sonically covers a lot of territory, from ska to crust to some excellent sing-along, hand clapping pop. I think one of the track has an accordion too. I picked this song because I loved the totally awesome rabid animal quality of the vocals and the black metal riffage. I recently saw these guys live too and I have to say a lot of their stuff translated from record pretty damn well.

Wheat Chiefs “Refuse” – I heard of these guys from Graham of the Wednesday Night Heroes out of Edmonton, Canada. The local heroes from there are SNFU, who are one of my absolute favorite bands. This group is a side project of SNFU’s Belke brothers. The Belke’s, along with vocalist Mr. Chi Pig, were the mainstays of SNFU. The Wheat Chiefs have a lot of that patented double riffage that SNFU had but with maybe a tiny bit more of a rock edge. This album is totally awesome all they way through, and I had trouble picking a song, but this one pretty much covers all the bases of awesomeness.

Mekons “Keep on Hoppin'” – Excellent alt-country that doesn’t hide the fact at all that it’s from Britain. The chugging train like riff and the high lonesome singing are superb and there’s just something so oddly hopeful about the lyrics.

Schlong “Dance at the Gym” – At first the concept of a full album cover of Westside Story just seemed like it would be lame, but Schlong (most famous member, Dave Mello drummer of Operation Ivy) actually takes all the songs and makes them their own. It’s a very fascinating album, and I think this almost completely instrumental track exemplifies why. The song goes from sloppy punk to ska to hoe down to blast beats to straight waltz music and it never sounds wrong or forced. Punk Side Story seems to be the only Schlong that’s still in print, but any other little bits I’ve heard of theirs are really fascinating. I like the really reckless sense of experimentalism in all their songs, while still maintaining a spastic punk edge and sense of humor.