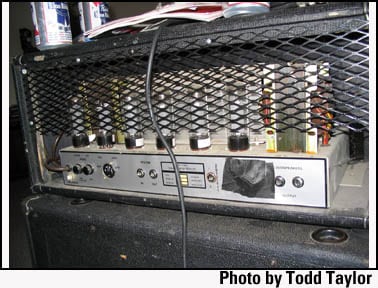 I’ve been reviewing records in two-month intervals since 1996 without a break. That’s a lot of music, a lot of vinyl under the bridge. Perhaps the largest thing that’s changed over the years is my expectation of music. At the DIY punk level, intention and purpose are becoming more and more important. If I know someone personally and they’re a shitbag, it’s almost impossible for me to get into their band.

It’s more and more about context.

Why spend any part of my day celebrating another’s assholeishness, right?

I’m also not saying that I encourage you to like shitty bands because they’re nice people with right-on ideals. There are plenty of bands that would be better off being writers, journalists, or mime troupes. What I’m postulating is that there is a sweet spot within the spectrum: great bands that are playing for the right reasons. Battling personal demons for therapeutic benefit. Making punk a lifelong pursuit. Sharing and creating with their friends. Without expectation. Long-term rejection of the status quo.

These things are important to me because I want to celebrate when I listen to the music I love. I don’t want to think of cars, insurance companies, or lawyers.

Here are songs I’ve come in contact with over the past two months and like quite a bit.

GOD EQUALS GENOCIDE / LIBYANS: Split: 7”EP
God Equals Genocide: What works for GEG is contrasts that balance. Sweet-but-unsatisfied. Snarly-but-uncomplainy. They play wonderfully dirty and sloppy yet their intentions couldn’t be more clear, their conscience more clean. When they play live, Danny and Adrian hootenanny between guitar and drums, marking the middle of their set. On record, it happens within seconds! Who replaced the logo of the Bananas where the dove is supposed to be at the end of the bayonet on my Discharge record? Never Again! Libyans: Gnashing, beaks-a-pecking, smart-not-damning hardcore with flourishes that give hints that not only has Crass been a consideration and guiding hand, but so are Wire and the Wipers. Has a nice strangulated-yet-gallopy tension. Sorta like reaching really high on the top of a ladder for some high-hanging fruit and not fully retaining your balance while wearing a well-worn Bags T-shirt... as a band sound. Some of the strongest tracks ever from both bands. –Todd (Shock To The System / Dirt Cult)

ALOUATTA: DIY: 4-song 10”
Tightly-structured, loose cartography, expansive rock that ends in cabinets full of explosives and chipped dishes. An alouatta’s a howler monkey. So was D. Boon. This Swedish record could fit right into Fishwife/Tanner/Night Marchers adjoining neighborhoods of San Diego, Sweden. Following the map legends (and guitar leads) finds us in a swampy yet clear place that’s expansive, feral, and brightly lit. They know what they’re doing and it sounds big and tight and wobbly enough so it’s not tiny-precise but more embers-burning-a-hole-in-the-carpet, their-smell’s-everywhere. Nicely done. –Todd (Sodertorn Record Company, skrammelrecords.com/sodertorn)

LEMURIA / CHEAP GIRLS: Split: 7”
Lemuria: The cute-o-meter is pegged, the needle blipping into outright preciousness at times. But instead of developing musical diabetes or knitting a sweater for a posi-hug take on the world, I believe in Lemuria’s earnestness. And their two songs are catchy. Somewhere between The Unlovables, Defiance, OH, and Full Of Fancy? (My sweet-voiced, almost indie-pop collection isn’t vast.) Cheap Girls: I lived in one apartment for five years. Shit carpet. Fibers everywhere. When I moved and removed the clock in the living room, where a pin on the back touched the wall, it formed this elegant, intricate shadow of dust on the wall. The Cheap Girls songs smoke and smolder and get into everything around them. Cumulative effect. They dissipate and cloud, slowly staining everything they touch. That’s power and grace. Nice split. Good-surprised. –Todd (No Idea)

TRUE STEREO: Self-titled: 7”EP
Bless these punks. I fully admit of being in a certain mindframe growing up. It was a direct result of being unrelentingly bashed over the head with the radio canon of classic rock when working blue collar jobs and growing up in the rural high desert. I was in my early thirties before I circled back around and began to appreciate bands like Thin Lizzy, Black Sabbath, and The Sweet. I’m hypotheticalizing here, but I think True Stereo—although undeniably launching from the DIY punk space station—are steeped in a long, worthwhile rock tradition. They’re on a completely different trajectory than Tucson’s Lenguas Largas, but give thanks to both bands. They’ve separated the good rock music from the shit, then supercharged it and made it their own so you, dear listener, can witness the following: No, it hasn’t all been done; No, DIY punk is not in a musical cul-de-sac or echo chamber; And no, the entire future doesn’t belong to making songs to accompany a product as part of a “lifestyle campaign.” Really fuckin’ good. –Todd (Dead Broke / Family Night)

SOMETHING FIERCE: Don’t Be So Cruel: LP
Wham! meets all of the slower Clash songs from the middle of London Calling, on. Serious. And it’s fuckin’ great. That’s all you really need to know, but for the band to understand I’m not clowning on them in the least, here goes: Rarely have I heard a band take the mellower, mid-tempo Clash as a starting point and embrace those slower-burning red-hot coals. (The Ratchets and Ringers being notable and worth-seeking-out exceptions.) Clash aping has typically been—in thoughtless hands—”punk ‘77! Charged hair! Spray-paint shit!” I love Clash ballads like “Lost in the Supermarket.” Here’s where Wham! comes in. Instead of mixing the Clash with more traditional rock’n’roll (or even the psych rock Something Fierce alluded to in their debut LP), there’s something prancy and Euro-pop in the delivery. Something very butt-missing in stone-washed jeans, gay-sex-in-public-bathrooms, and permanent-stubble that was a little off-putting when I first heard this new record with the echoes of There Are No Answers still ringing in my ears. But it’s this airy, open, summery, and unexpected gayness that keeps Don’t Be So Cruel spinning at high rotation at Razorcake HQ. Yeah, it’s smart, the lyrics belie some real though, but it’s also so prancing unicorn, so “Careless Whisper.” Shityeah. –Todd (Dirtnap)

JUNK, THE: Alright: 7”
The Junk make me think of rat bikes and choppers. Knowledgeable miscreants who take limited resources, cut off all the unnecessaries—all the gingerbread and fenders and guitar solos—to pure, quick-shifting, tire-spinning function. True rat bikes focus on the inward beauty and mechanical soundness, not bolt-on chrome or dentist-and-lawyer-approved paint jobs, not bright cartoons puffed up as motorcycles. The Junk are loud, running straight pipes, there’s no back seat, and the only chrome-like substance is the fillings in their teeth, exposed as they point and laugh in joy as they tear ass down the freeway when the straights and squares are stuck in traffic. Pure punk played well, with a sense of swagger and fun. Is true OC punk peeking its head back up again? I hope so. –Todd (Hostage)

FUTURE VIRGINS: Western Problems: LP
Ever feel like crying, smiling, laughing, and yelling along at the same time to a band? That’s what the Future Virgins do to me. It’s sort of beautifully unnerving how many overlapping layers there are in their musical onion. When taken as a whole, as complete, it seems so simple, so natural. When looked at closely or unfurled: they’re employing these closely interlocking veins; this complex fleshy forgiveness. When it’s cut and examined, they emit a sweet, sharp, poetic juiciness. The Future Virgins have that intangible band magic that is as much human DNA, life experience, the alchemy of electrical currents going through musical instruments, long-range, beyond-”progressive” thinking, and the collective thought of a supportive region (Chattanooga). The thirteen-year-old, isolated me would hold this aloft like an amulet, wishing for it to take me to a better place. The thirty-nine-year-old me is glad that it’s currently doing just that, that we’re not just standing around, waiting for the past or for nostalgia to collapse over us like a concrete tidal wave. That there is a future dawning every morning and we’re an integral part of it. The Future Virgins have made some of the best ramshackle-gold DIY punk in the past ten years, bar none. Fuck, man, I’ve still got a lump in my throat at how beautiful this record is. Definitely a top ten of 2011. –Todd (Plan-It-X South, [email protected] / Starcleaner, starcleaner.com / [email protected])

SMOGTOWN: Dictoria: 7”EP
Few things are worse than a backseat driver punk. Guilty. Take one: Why the fuck weren’t these two ragers on the last full-length, replacing the too-long sound bite and the acoustic closer? Take two: Hostage Records (after a six year hiatus!) brings out the best of Smogtown once again, on the heels of their first LP in too many years. Smogtown’s strengths are nuclear-radiation, nuclear-power, and nuclear-suburban-decay. Some say that, for better or worse, California is the harbinger of the rest of the United States. (The foreclosure of the American dream, in particular.) Smogtown’s your early disaster warning sirens. Smogtown’s your prophecy that’s coming true. Take heed. Take notes. Stock up on clean water. Ripping single. –Todd (Hostage)