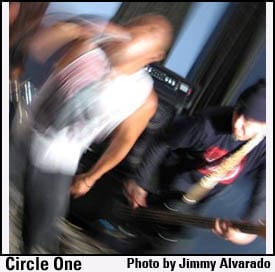 Not much rhyme or reason here—a selection of old and new, rare and not-as-rare tunes from bands famous and obscure pulled from different formats—other than I thought they went well together. Todd ’n’ I were feelin’ particularly silly that day. We’ve been friends a good spell and it happens often when we get together.

I think I said as much during one of the talky-parts, but if not, I would direct your attention to the closing tune, “I Saw Dead Jim’s Shade,” which I’d say is one of the best and most criminally ignored tunes ever to come out of L.A.’s underground—moody, un-hummable, and oddly cinematic. I was completely mesmerized by their performance of the tune on New Wave Theatre one late night in the ‘80s and subsequently scoured the county for years before I scored a copy of We Get Messages. A nice little slice of proof that ‘80s L.A. punk was much more nuanced than merely being a high-velocity soundtrack for meatheaded goons to assault each other.