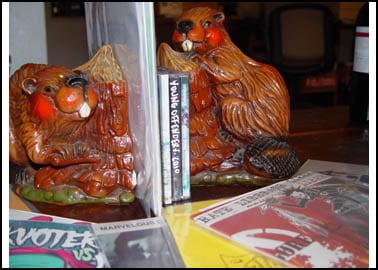 I’ve been reading a lot about religions and science fiction books lately. (I recommend both Under the Banner of Heaven by Jon Krakauer and A Stranger in a Strange Land by Robert A. Heinlein.) Human beings need something to believe in; that seems to be the unifying theme. Because, let’s face it, life is hard, sucks a lot of the time, doesn’t make a ton of sense, and it’s nice to think that there’s something—anything—after this existence that’s more than the equivalent to sitting in a drive-thru window and never being served.

Some sort of nice payoff during our life would be nice. But, being neither religious nor believing that computers are our friends once we turn our backs, I’ve constantly been turning to music for some sense of greater meaning. Belonging to something bigger—these abstract musical notes hanging out in air, pushing speaker cones, spinning off of vinyl—not necessarily even in “scenes,” but these highly personal, ever-evolving collections of songs made by people who can’t live without creating them. I mean, shit, people can be good in and of themselves without ascribing to a dogma that denounces all other systems of belief. I know quite a few and they’re my closest friends.

So, here we are again. Mostly, these are new songs, some re-issues, and some “Oh, fuck, that song reminds me of…”s from twenty or thirty years ago. The last song by the Jack Palance Band wraps up what I’ve been thinking about quite nicely. It’s called “Heaven” and only poor people would be invited…

CIRCLE ONE: Patterns of Force: LP
Circle One—with John Macias’s vocals drenched in oil slicks of reverb—is like convincing someone to listen to the Dead Kennedys or Cypress Hill for the first time. It sounds like a band fronted by a cartoon character toying with opera… and it can be a jarring experience. When “The Gospel” and “Our Sword” kick in, you realize, “Oh. Fuck. They’re Christians.” Yes and no. John was deeply religious. He also had grave mental problems that would tragically end his life in Santa Monica after being shot multiple times after throwing someone over the side of a pier. There’s also the gray area of John’s cult-like personality, the violence (to others and himself) and The Family’s gang tendencies and tactics. So, yeah, Circle One is a cryptic, paradoxical band that doesn’t unravel cleanly. They’re more like a chunky candy bar left out in the sun. No matter how you try, there’ll always be a bit of a mess on the wrapper, but it’s still worth the effort. Also, unlike ninety-nine percent of East L.A. bands, Circle One actually released vinyl when they were an active band, which was no small feat. Originally released in 1983 by Upstart Records, Patterns of Force was never that easy to find. But with Mass Media and Puke N Vomit co-releasing this re-issue, it’s much more than just an artifact. It’s a fascinating and powerful snapshot of a time in punk in a place that didn’t get much attention compared to other bands—Black Flag, Circle Jerks—just fifteen miles away. If you’ve never crossed paths with Circle One or if you’re in the doldrums of listening to the same twenty-five “punk favorites” albums in your collection, this comes highly recommended and remains to hold its own distinct personality over twenty-five years after its initial release. –Todd (Mass Media / Puke N Vomit)

HOMOSTUPIDS: Night Deacon E.P.: 7”
Like a Supercharger with slightly artier tendencies or a sparser Baseball Furies, Homostupids keep it together by falling apart. Having seen more than my fair share of absolute messes of bands, it’s a difficult feat to be this simple and shambolic without the music roiling into an unlistenable turd. If broken is the new fixed or if there was ever an anti-douche inoculation shot to get before setting foot into Guitar Center…  go, Homostupids! –Todd (Fashionable Idiots)

TASER BREATH: Self-titled: 7”
Whoa!—this is chaotic and a lot for the ears to digest, even in the span of one song—but I like it. There’s a strange containment to it all after the first several passes. Grindcore. Someone-lived-in-Tucson-at-one-time weirdness. Dirge. Amphetamine Reptile-style spent fuel and diesel exhaust rock. Samples. It’s like listening to The Locust, where twice as many notes are shoved into a limited space that it’s a bit much to cram in all at once. But once the ear holes get dilated, and you know that the roller coaster isn’t completely coming off the tracks—that it just hasn’t followed a regular maintenance schedule—a nice, punchy, jarring ride with moments of pure fright that you’re gonna die followed by snatches of pure freefall and pleasant instrumentals spins off the 7”. For the four of you this’ll make sense to, invert the awesome quirkiness of the Cuntifiers into a dark and bad-drug filled place. Rub some Anal Cunt into that… then that’s what Taser Breath starts to sound like. –Todd (Goin’ Ape Shit)

SIN REMEDIO: Border Hoppin’ Hardcore: CD
Los Angeles’s Sin Remedio play music from two poles: grindcore and norteños. They play these widely divergent styles of music with equal focus and power. My favorite tracks are where they oscillate and blend the two styles. “Manias del Pensamiento” is a prefect example. The women’s sweeter voices hover over the ragged rubble of the guys’ voices; there’s a nice and tender sweep of instruments before the rough and broken concrete crash of guitars. In a lot of ways, tracks like this make me instantly think of East L.A. itself. Seeing innocent things—like a public park taken over for a kid’s birthday, bright piñatas and balloons, Esponja Bob jumpy castle—surrounded by walls and sidewalks of graffiti, haloed by barbed wire snagging trash above nearby buildings. It’s this contrast of dark and light, celebration and decay, that makes Sin Remedio such an interesting and memorable band. My only question mark about this album—due to how textured and multi-moded their sound is—is how it would sound recorded more fully. I’m not saying Fleetwood Mac full, Tragedy full, so you can hear both the atomic blasts and the more floral, delicate nuances. If you’re into hardcore, Sin Remedio are well worth your time. –Todd (Sin Remedio, sinremedio.net)

REACTIONARIES, THE: 1979: LP
Please understand what a one-in-ten-thousand shot this is for this record to come out as well as it did and prevented it from becoming merely a footnote. One: The fact that a pre-Minutemen band practice tape from the late seventies was even found. Two: The fact that the Reactionaries’ tape didn’t just fall apart when it was discovered and played. Three: The fact that the tape was handled like a deceased friend: with care, respect, and with all intent of honoring the dead. Singer Martin Tamburovich and guitarist D. Boon can’t be anything but smiling down from where ever they are. Four: The fact that the “record collector’s impulse” didn’t intentionally keep this tape obscure, sneak out some pressings on Ebay, then rake in some back door, gray market cash, garnering the respect and envy of a small group of well-heeled vinyl dorks while keeping it out of the hands of folks who love music and are willing to pay modest prices for it. Five: The fact that the fidelity of what’s transferred to vinyl sounds honest and true to the time; it’s carefully preserved. It’s far from mud. And it’s far from being pro-tooled to death or “Let’s fix the bottom end” bullshit. Six: With all that said, if there was just an A side to this record—the practice tape—it’s an amazing historical, archival effort—with its heart in exactly the right place—where you can hear the molecules and DNA of the Minutemen banging around and forming. But the fact that the B side is roundtable congregation of over thirty current (mostly) San Pedro musicians covering the songs on the A side is flabbergasting all the way from a conceptual to a logistical point of view. History ain’t dead folks; no reason to jump into a coffin before your time. Music ain’t dead, either. There’s a direct legacy that continues on through today. It still can be done “in house.” No need for larger labels, fancy-assed studios, or unsympathetic outsiders. Going back sometimes means leaping forward. Protection is often for the survival of the species. Seven: Most of us don’t even have pot thoughts this lucid and complicated. The fact that this record not only exists but was pulled off with so much focus and audio payoff warrants as many people as possible who claim to like punk to listen to this one-in-ten-thousand shot.  –Todd (Water Under The Bridge / 45 RPM, waterunderthebridge.com)

MANIX, THE: Van Activities: 7”EP
In this post-Rivethead / Banner Pilot, Dear Landlord-ascending world with the Dopamines peeking over the cinder block wall like Kilroy, The Copyrights’ show the previous night still ringing in the air, and Jesse Thorson driving the van telling them of all the things they’re doing poorly, The Manix Minneapolis-icity/Midwestern pop punk-isms are undeniable. They play ball bearing tight with no irony in sight: songs about the simple life and the nine-to-five version of death that so many Americans punch themselves in the face with every day. The dividing line between “Yeah, it’s all right” and “Flip it over. Play it again,” in pop punk is the thinnest of lines if you’ve been listening to it for more than five years. The Manix have both the compressed “we’re in it together” feeling and that electrical spark that keeps on zapping through all four songs. Well played. –Todd (Whoah Oh, whoaohrecords.com)

KREAMY ‘LECTRIC SANTA: Operation Spacetime Cynderblock: “Four Riddles of the Spheres”: LP/CD
There are times for expansion and there are times for contraction. KLS vibrate. Expand. Contract. Expand. Contract. The reference points are far-flung: Sun Ra, a near death spinal injury, Roky Erikson, broken glass, Crass, experiments with space and time, Smegma, violins, Bongwater, splattered paint, Hickey, rainbows inside of gasoline on water, The Creation, Eastern religions, and Shellshag. Art and aesthetics are personal choices. For music, I always think back to a sage fat man’s chest—“How much art can you take?”—for guidance. It’s no secret that bad art is an easy escape for the lazy and pretentious. But the continued vision to explode a microcosm into a self-populating universe; that takes serious misfit guts and long-term determination beyond the tried-and-true initial impulses of ego and negation (i.e. me rad, you suck.). Although I won’t find myself listening to KLS on a regular basis (they’re more of a sipping whiskey than a nightly beer run), I do find comfort that they exist and are pushing their boundaries and giving shape to what before was mere darkness. And when they’re visiting musical lands where I’m the most comfortable, they absolutely nail sweeping pop melodies and DIY punk with scary clarity and ease. Expand and contract. Expand. Contract. –Todd (Starcleaner, starcleaner.com)