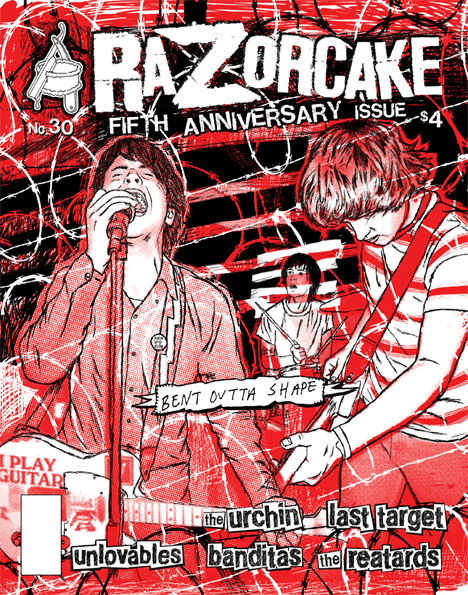 Bent Outta Shape: Interview by Todd and Josh. The cutest li’l dirty boys you ever saw! They toured in a watermelon and one time Josh stole beer from the Briefs for them. Oh, and they rule.

Last Target: Interview by Donald "Plex" Lowery. Japanese punk rock. We could tell you that it’s the lady who used to sing for Thug Murder or something like that, but really, all you need to hear is "Japanese punk rock."

Banditas: Interview by Jennifer Whiteford. Three folks from Canada who were described by our very own Sean Carswell as a good poet, a feminist, and a drunk!

The Unlovables: Interview by Jennifer Whiteford. Super catchy pop-punk from New York. Actually, "pop" should be capitalized, italicized, highlighted, and underlined about seven or eight times... and we mean that in a good way!

The Reatards: Interview by Speedway Randy. Well, they’re not teenagers anymore, and they kinda know how to play their instruments, and nobody plays drums on a bucket, but goddamn, that doesn’t mean they’ve lost one bit of their monkey-throwing-rocks-at-cop-cars charm!

The Urchin: Interview by Ben Snakepit. Japanese punk rock. We could tell you that the language barrier doesn’t prevent them from talking about getting drunk, but really, all you need to hear is "Japanese punk rock."

The Fest: Article by Gabe Rock. Hundreds of drunks from all over the world fly into Gainesville, Florida to get drunk with each other. Oh, and some bands play and stuff.

Liz O. finds her own personal Jesus (and by that, we mean she went to see Depeche Mode, in case you didn’t catch the Depeche Mode reference).

Sean Carswell tries to avoid nailing his feet to the floor.

Amy Adoyzie visits a creepy-looking swingers’ club, mere blocks away from her house.

Ben Snakepit either knows somebody who got scabies or got scabies himself and just doesn’t want to admit it.

The Rhythm Chicken returns to his old, Gary-Coleman-bad-mouthing ways.

Josh couldn’t remember what he wrote about two weeks after he wrote it.

Gary Hornberger discusses the possibility that he may lose his job and also reviews comic books.