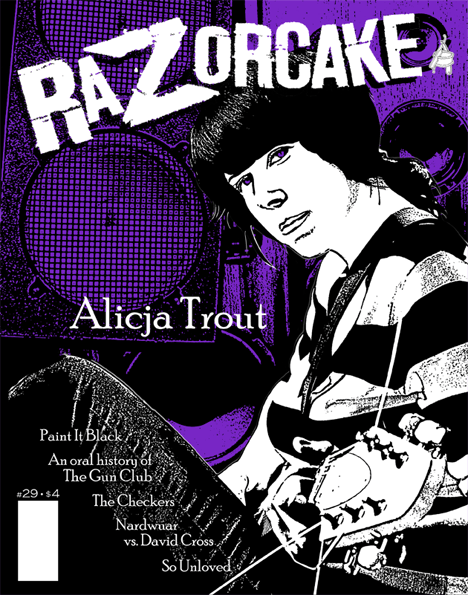 So Unloved: Interview by Jim Ruland. Four teenagers get interviewed by a guy who is easily twice their size. Doesn't sound very fair, does it?

Paint It Black: Interview by Todd Taylor. Todd's always done a few curveball interviews here and there, but how the hell did he manage to interview the first song on Aftermath? Oh, wait...

The Checkers: Interview by Kat Jetson. Spunky new wave power pop from the same neighborhood as Razorcake HQ! Sometimes known as the Rally's but it's the same franchise. (Note: you probably won't get that joke unless you're familiar with regional fast food restaurants.)

The Gun Club: Article by Ryan Leach. A tremendous oral history of one of the most underrated L.A. punk bands of all time. Read this, listen to Miami, and be saved.

David Cross: Interview by Nardwuar. This David Cross guy is pretty funny. You should check his stuff out some time if you get the chance.

Art Fuentes makes you wonder what kind of medication he's on.

Jim Ruland presents the third and final part of the interview with his father.

Rev. Norb serves as a wedding officiant and somehow does not get his ass kicked by angry relatives.

The Rhythm Chicken lets us know the exact point at which a fart becomes an unfortunate accident.

Josh wrote about something or other. We didn't really read it.

Sean Carswell tells the story of a construction worker who makes out with a girl who looks kinda like her brother, and apparently that's a problem for him.

Plus a boatload of reviews. Literally. We rented a boat and filled it up with reviews just to make sure that it wasn't false advertising.