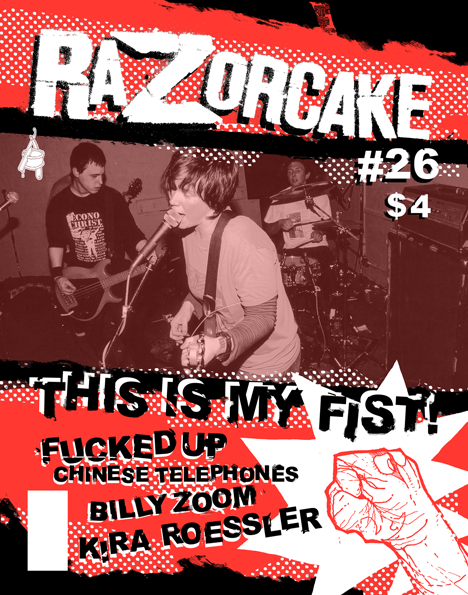 Razorcake Issue #26 from 2005, Featuring This Is My Fist: Fucked Up, Chinese Telephones, Billy Zoom, Kira Roessler

This Is My Fist: Interview by Todd and Josh. It's almost a disservice to compare bands to Crimpshrine or Jawbreaker, because both reference points are pretty ubiquitous, but This Is My Fist really does have that gritty, swelling, compassionate sound like their Bay Area forebears. It's intelligent but not overbearing, as evidenced by the fact that they talk about labor movements and bowel movements in this interview.

Fucked Up: Interview by Todd and Josh. I think we're all running out of things to say about Fucked Up. Imagine the first time you heard Black Flag or Born Against or Los Crudos or any fucking hardcore punk band that played with real conviction instead of just rehashing Minor Threat or Negative Approach. This band is unreal.

Chinese Telephones: Interview by Dan Zajackowski. Milwaukee kids dork out in a van together, talkin' 'bout mix tapes and rock books and generic barbecue chips. Plus, they rock!

Billy Zoom: Interview by Julia Smut. The guitarist for X is old enough to be a grandfather, but instead of settling into a comfortable family life, he's spent a lifetime working hard at what he loves: music. He talks about his origins playing in R & B bands in the late Sixties and his time in the early LA punk scene.

Kira Roessler: Interview by Ryan Leach. As the only female member of Black Flag, Kira proved that women in punk rock didn't have to be the Runaways; they could be just as much of a part of the rugged, just-get-in-the-fucking-van DIY punk rock as any guy could. Here she discusses what gave her the drive to succeed at whatever she did no matter the cost.

Liz O. attests to the healing power of the dance floor.

Sean Carswell tells the story of a racially-motivated schoolyard fight.

Jim Ruland spends the weekend of the NCAA Basketball Tournament in Vegas.

Nardwuar the Human Serviette talks to Stars about... Canada and cultural obscurities, just like always!

Rev. Nørb ties up (joke's your's if you want it) the passing of the Pope and the importance of symbols in punk rock.

Designated Dale talks about the situation that may cause CBGB to close.

Ben Snakepit offers advice on being a houseguest. But what's that shit on the back of his head?