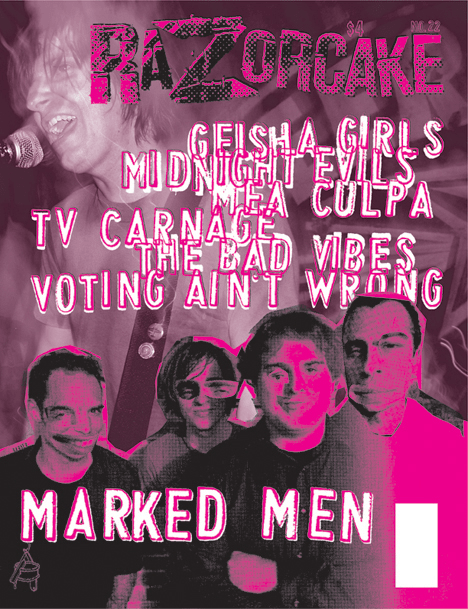 Do you enjoy that Razorcake uploads sold-out, out-of-print issues as free PDFs?

Razorcake is the first and only official non-profit DIY punk rock fanzine in America primarily dedicated to supporting independent music culture. Please help keep us rolling along and consider making a tax-deductible donation to us. If you are reading this before December 31st, 2013, check out our year-end incentives!

The Marked Men: Interview by Todd. Pretty much one of the best rock and roll bands on the planet, plain and simple. The Marked Men play a furiously catchy blend of punk, garage, and pop that will simultaneously remind you of ten different bands and yet still sound distinctly like the Marked Men. They make fun of Stevie Ray Vaughn a bunch of times and discuss the possibility of getting cancer from fluorescent lights.

For a text and ebook versions of this Marked Men interview, click here.

TV Carnage: Interview by Ben Snakepit. Bizarre and hilarious at the same time, TV Carnage is a series of video collages put together by a guy known only as "Pinky," his TV, and his editing equipment. If you're curious as to just how much odd crap is shown on television, all you have to do check out an installment of TV Carnage. From monkeys riding dogs to people eating poop to newscasters with suspiciously bleeding noses, it's all here.

Voting Ain't Wrong: Article by Todd Taylor. In this election year, Todd discusses the ins and outs of the Electoral College, gives reasons as to why it should be dismantled, and explains why he registered to vote after years of disaffection with the whole process.

Geisha Girls: Interview by Kat Jetson. Three non-girls playing unique, original punk rock in the vein of British post-punk bands like the Cure and Gang of Four, the Geisha Girls sat down with Miss Jetson to discuss the important issues of our time, such as mustaches, the worst Prince album, and Zoloft.

Mea Culpa: Interview by Todd. Bands that can express a coherent political sentiment and rock like motherfuckers at the same time are extremely rare. In this day and age, during a time when we may need it the most, aside from the Thumbs and the GC5, very few come to mind. Mea Culpa overcomes all of that. They're socially aware without being dogmatic or bone-headed simple about the issues. And one guy looks kind of like Captain Picard!

The Midnight Evils: Interview by Aphid Peewit. No bullshit rock from a band known far and wide as "ugly dudes who like to drink." Facial hair abounds as they talk about popcorn salt, pro wrestling, and getting fucked up in basements while many alcoholic beverages were surely being consumed.

Ayn Imperato tells the story of a passionate affair with a man who happens to be spoken for.

Sean Carswell discusses the role of propaganda as utilized by the Fox News Channel.

Maddy recalls her days as a Clinton campaign supporter during the 1992 elections.

Gary Hornberger talks about what he sees while riding his bike to work and also reviews comic books.

Desiganted Dale talks about how he served as an altar boy at one of the churches where the sexual abuse scandals took place.

Seth Swaaley tells of New Orleans streetmusicians and dancing in the street, not unlike the Van Halen song of similar nomenclature.

Liz O. tells the story of the infamous Nightstalker attacking her neighborhood.

Nardwuar interviews Franz Ferdinand (the band, not the explorer, who has been dead for a few centuries and is thusly kind of hard to interview).

Jim Ruland hates having to pay ATM fees and tells Bank of America to suck it.

Ben Snakepit had more fun this summer than you and I.