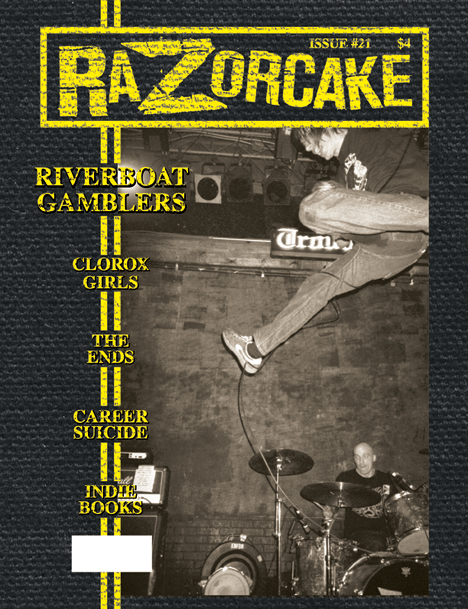 The Riverboat Gamblers: Interview by Todd Taylor. Whoop ass rock and roll straight out of Texas and straight into these pages. The bass player lost his teeth at a show in San Francisco. The singer got kicked out of a karaoke bar for breaking a table during "Can I Get a What What" by Jay-Z. The whole band hung out with a van full of monkeys when they were in Los Angeles. I can't think of a higher recommendation than that.

The Clorox Girls: Interview by Mitch Cardwell. Get a kick out of simple punk rock bands like the Gears or the Spits? The Clorox Girls fall somewhere in the middle of those fine bands. In this interview, they mostly talk about the difference between Oakland and Portland, being young, and partying in their van. It ain't Shakespeare, but Shakespeare stinks and the Clorox Girls don't. So there.

The Ends: Interview by Todd Taylor. In the history of punk rock, there's been a lot of bands that said, "Man, that Buzzcocks song is cool. Let's sound exactly like that." If you're anything like me, when you hear bands that do that, it sure does piss you off, but luckily for us, the Ends surpass all that. They're bouncy, slashy, and fun without sounding like they'd rather have Pete Shelley's dick in the back of their collective throat. This interview is possibly the first time that the phrase "schwangled clusterfuck" has seen print.

Career Suicide: Interview by Mike Frame. The man behind Get Up and Go!! fanzine talks with one of the best hardcore punk bands going today. Heavily influenced by bands like the Freeze, the Adolescents, and the Bad Brains, Career Suicide is one of the bands proving that it hasn't all been done before in hardcore, and that you can still make fast and loud music without painting yourself into a corner.

Indie Books: Article by Jim Conklin. An estimated eighty percent of Americans neither bought nor read a book last year. While that number may seem outrageous, in a roundabout way, it indicates a lack of quality control on the part of the five major publishing houses. The alternative to this is the growing number of independent publishers. Here are some of their success stories.

Spontaneous Disgust: Interview by Dan Glenn Fury. The details about this band are fuzzy, but the rumors flying around are seemingly infinite. Is it true that the guitar player got a pair of testicles tattooed on his chin? Is it true that the singer is a kingpin in the Czechoslovakian drug trade? Did they really tour in a Sopwith Camel? The world may never know...

Art contributes another of Rummy Duck's Fun Pages. It'll teach your kids how to draw the Mean Smokin' Poo!

Jim Ruland compares the recent Iraqi prison scandal to his own personal experiences in the Navy.

Maddy Tight Pants reveals that there is a curse on her head that not only caused her to sprain her ankle and get shingles, but also caused Pizza Shuttle to stop serving the square pizza!

Rev. Norb has his plans for running a marathon derailed by a dastardly bowel movement and instead introduces the theorem of inescapable punk rock doom. Suck it, Plato!

Gary Hornberger talks about the doubts of an aging punk rocker and reviews comic books.

Jennifer Whiteford recounts the experience of a young girl discovering punk rock in the midst of the riot grrl movement.

Designated Dale presents another installment of "People That Piss Me Off." This time it's people that abuse vending machines.

Sean Carswell gives us a few thoughts on the upcoming election and why people are already sick of hearing about it.

Seth Swaaley tells a story about a man working at a factory putting address stickers on junk mail catalogs.

Nardwuar the Human Serviette interviews Ice Cube, and hell, you know who he is.

The Rhythm Chicken forces California to tap out in submission on his recent Motherfuck the West Coast Ruckus Tour Spring Break 2004 Whooo!

Ben Snakepit goes to a punk rock show that confirms his faith in punk rock.