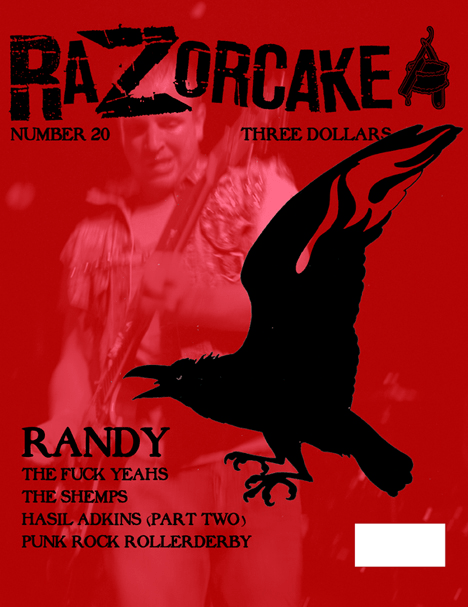 Randy: Interview by Sean and Todd. The two founders of this here magazine finally caught up with the hard-working, hard-drinking, hard-rocking Swedish band known to the world as Randy. Sometimes described as a blend of Chuck Berry, the Sonics, and Turbonegro, there's also a serious left-wing political slant to their lyrics, and they discuss everything from the Spanish Revolution and the privatization of health care in Sweden to, of course, beer.

The Fuck Yeahs: Interview by Aphid Peewit and St. Paddy. The Fuck Yeahs are one of the growing legion of bands that are reclaiming punk rock for weirdoes, and this interview wholeheartedly reflects that. Lots of fart jokes, lots of nudity, and lots of fun, booger-eating punk rock with, proudly, no commercial appeal. It also marks the first appearance of journeyman basketball player/ big oafish white guy Randy Bruer within the pages of any punk rock magazine.

Hasil Adkins (Part Two): Interview by Bradley Williams. The second part of this interview with rock and roll legend Hasil Adkins finds them talking about Nightmare on Elm Street, Tooter's Biscuit World, and smoking pot. How can you go wrong?

Arizona Punk Rock Rollerderby: Interview by Wez Lundry. I'm not exactly sure what part of "punk rock rollerderby" needs to be explained.

Designated Dale weighs in about the Howard Stern controversy.

Jim Ruland offers advice regarding the Punk Rock Bowling Tournament that he and his teammates dominated this year.

Ayn Imperato reminisces about a party from her teenage years, the highlight of which was lighting cockroaches on fire.

The Rhythm Chicken brings the mighty ruckus to an audience of zero.

Rich Mackin talks about why he became a Buddhist.

Jimmy Alvarado returns to columnar action with a great story about standing up and fighting back.

Seth Swaaley dresses up like a woman for Mardi Gras.

Sean Carswell talks about the time that he and Jim Ruland opened up a show for that old band featuring former "Law & Order" guest star John Doe.

Nardwaur talks about what he and the Evaporators ate while they were on tour.

Rev. Norb goes to the South By Southwest Musical Clusterfuck and even uses the phrase "nerts to the man."

Ben Sankepit offers advice on how to make a mix tape and it is just the fucking bee's knees.

And nope, no reviews in this issue, nosiree.