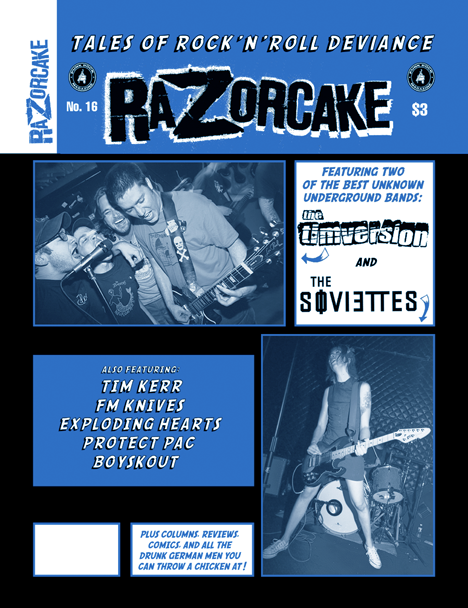 Soviettes! Tim Version! And Tim Kerr! Wow, celebrate the end of the 2000s with this now, totally free, digital version of Razorcake #16.

The Soviettes: The cover of this issue is graced by none other than this woman band trio from Minneapolis. Todd Taylor sat down with them to find out how they became a woman band trio with four members, including one male.

The Tim Version: Also flashing their mugs across the front page are Wesley Willis's favorite chauffeurs, the band who is proving that not every band from Florida sucks. They talked to Sean Carswell about making a living off eBay and how much of an influence the Replacements had on a really drunk band that rules.

Tim Kerr: Julia Smut interviews one of the most influential underground musicians of the past twenty years, the Al Quint of garage rock.

FM Knives: The first band that Rev. Norb has interviewed in eight years. What else do you need to know?

Boyskout: Interview by Kat Jetson. Find out who thinks popsicles are a guilty pleasure, plus the second Romeo Void reference to ever appear in Razorcake.

Nardwuar interviews Margaret Cho, one of the least funny people ever.

Seth Swaaley tells a story about coming home to Baltimore and his memories of the city. It's more interesting than I make it sound.

Ayn Imperato gets hit on by the lamest dudes ever. Guys, here's some advice: don't wear man-dals, ever.

Felizon Vidad writes about being an obsessive collector of dolls.

Rich Mackin responds to his accusations of sexual assault.

Sean Carswell goes to Portland (Oregon, not Maine), faces censor-threatening anarchists, and defends his right to publish whoever he wants regardless of any allegations they might be facing. Plus he makes fun of Fifteen.

Gary Hornberger reviews comic books, which are cool. You should read comic books.

Rev. Norb likes comic books, too. He's letting you, the reader, decide whether or not he drinks anymore, plus he's Rev. Norb, so you know you're in for a mirthful good time.

Money talks about this little band called Smogtown, who rule my lame ass and broke up.

Plus lots and lots of book, zine, record, and video reviews by bums like me, as if you needed more prodding.