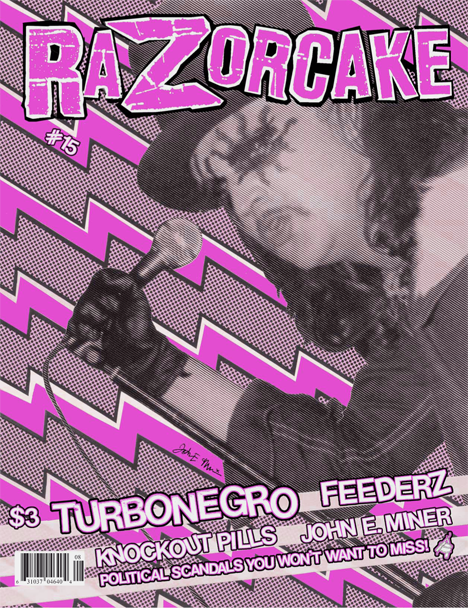 Turbonegro - after a five-year hiatus, the boys from Norway take little time to get right back to the basics: dirty, dark, anthemic, homoerotic, sailor punk. Todd Taylor stands around the dressing room, then wedges into a bathroom with Happy Tom and Hank to learn who was on a neo-Nazi death-list, who loves dolphins, and about Norwegian parks with sculptures of naked men kicking babies.

Petite Paquet also interviews John E. Miner in this issue and finds out what goes on in the mind behind some of the best posters around.

Congressman Henry Waxman: Interview by Sean Carswell: Congressman Waxman is one of the forerunners of the investigation of why the President declared forged documents as reasoning to head into war and that Halliburton was awarded a no-bid contract to begin operating in Iraq. Sean finds out the sticky details and why there has been little press following.

Choice Wars: Article by Karla Perez-Villalta: Karla offers an informative and disturbing look at what the government is doing to control reproductive rights in America, as well as any country supported by American funding. She brings to light the global gag rule that Bush reinstated once in office, the anti-choice position of many Bush-appointed cabinet members, and what that could mean with the powers awarded to them by those positions. The biggest upset is that, due to so many other areas of misconduct of the Bush administration, most of the information presented here has received little, if any, media attention.

Mr. Private Sector Meets Mr. Public Service and Vice Versa: Article by Jason Dick: Jason takes the time to do what most politicians probably hope you won't - reads through public records. Once again, these are public records. Anyone can read them. This isn't the stuff that's covered up. Still, he finds that Dick Cheney received over a hundred thousand dollars from Halliburton last year. Halliburton, the company he had been the CEO for five years. Halliburton, the company granted a no-bid contract to be operating in the now "liberated" Iraq. Very interesting information here, indeed.

Money just doesn't learn and returns Tijuana, this time falling for an accordion-wielding woman in a bar. Over the course of the night, Money and his friend's drugs are stolen by the same accordion woman, they're seduced by three blonde co-eds, and end the night with guns pointed in their direction.

Art F-Uentes brings us four strips from Shizzville that answer the long-awaited answer to the quandary of jugs vs. jug o'ale... how to choose between the two?

Rhythm Chicken presents the egghole vs. dinghole debate and reveals the truth behind the new and impostered Rally Rabbit.

Maddy wants to ruin your summer vacation! Well, not really. She just wants you to read and suggests ten books as a summer reading list. Plus there's a prize if you complete it, and I bet it's better than the lame rainbow pin I got from some Pizza Hut reading club!

Sean Carswell introduces us to two people from his past through the letter written by one them, Pete, as a step in rehab. Midgets, lacy purple bras, pistols, and the Braves vs. the Yankees all fit in one long night.

Jimmy Alvarado's wife gets free tickets to an all day music-fest where KISS is set to play, so he tags along. Instead of pyrotechnics and face paint, Jimmy's wife fully grasps why Jimmy invests so much into the subculture surrounding punk.

Rich Mackin is zen? Forks are the tools of the aristocracy? All is answered within, grasshopper.

Rev. Nørb once again is drawn into the Greatest Roller debate, confronts rumors that he, in fact, writes the questions to be answered, and has a picture of himself with those Milwaukee Brewers sausages that they keep showing on the TV because Randall Simon hit the Italian Sausage with a bat.

Felizon Vidad celebrates the end of the year and gets the upper hand on a student.

Designated Dale takes on New York like a Warrior. He hunts down the Chelsea Hotel, the 53rd and 3rd intersection, visits Joey Ramone's grave, and goes on an unforgettable tour of Coney Island with Captain Bob.

Sean Granton's grandpa has the best advice about ice cream that I've ever heard.

Plus, as always, way too many record reviews for the regular brain to grasp, plus zine and book reviews. The only DVD we got to review didn't work.