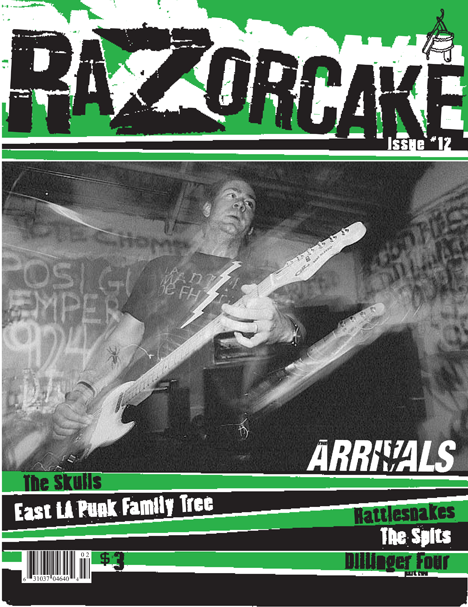 "Bummed about music in general? Do yourself a favor and seek these guys out." I love reading stuff like that. Almost six and half years later that statement is still so goddamn relevant about this band. If you missed it the first time around, #12 is a doozy.

On the cover: An unsung Midwestern treasure, The Arrivals. Megan Pants and Todd caught them in San Francisco and Berkeley. These four unsuspecting dudes have just raised the bar ? taking melody and accelerating it right to the edge so it both locks into a groove and cuts like a freshly unpackaged razor. Find out which member considers sex in his room his day job. Bummed about music in general? Do yourself a favor and seek these guys out.

The Skulls: Interview by Petite Paquet and Todd: An original '77 LA Masque band resurges with brand new band members, the best songs they've ever recorded, and a rabid new following. No assy taste of retreads, no unsettling ash of a reunion tour. This is the real thing. Discover the definitions of the "purple jaws of Grimace." Exclusive Razorcake bonus: if you have a smaller penis than the bass player, and prove it at a gig, you get free Skulls merch.

East LA Punk Family Tree: By Jimmy Alvarado. Pictures by Rebecca Rodriguez. After almost three years of planning, plotting, unanswered inquiries, and searching, Jimmy dug up a huge chunk of the all-but-buried lineage of the severely underrated and virtually undocumented East LA punk scene. This comes with a four-page family tree chart and Jimmy's reflections on how the project affected him and works as an accompaniment to Issue #3's article on East LA punk.

Rattlesnakes: Interview by Kat Jetson. From the desert burg outside of Los Angeles, Corona, comes a soulful, broken wail in the high energy vein of early Delta 72. Follow their shy, convoluted thought process when crack interviewer, Kat, prompts them to keep the interview ball rolling: "Mexico is in the elevator at this point." Find out which member has a lethal, sharp ass.

The Spits: Interview by Money: Dip Devo in gas, huff some Ramones vapor, and crank all the stupidsmart dials to eleven. Seattle's Spits have got a robot that plays synthesizer. They try to dress different every performance. Beneath all the fungus and sleep deprivation, there's an awesome and solid spine for the songs. Don't chalk 'em up to novelty, 'cause their quite possibly the only band that's released two albums with the same name.

Dillinger Four, part two: Interview by Todd: Find out which member was blackout drunk for two years, which member's been accused of being a professional cellist, which member serves free gay beers, and which member dyed his pubic hair at a Scared a Chaka show, wearing only sneakers and sunglasses. As a bonus, there's eight full pages of interview of one of the smartest, rockingest, most honest, most likable bands in the universe.

Nardwuar the Human Serviette interviews Princess Superstar. Here's an excerpt:
Princess: If you listen to my whole discography you will see there are myriad influences...
Nardwuar: And one of those influences is asses. You love asses, don't you Princess Superstar?!
Princess: [laughs] I do!
Highest quality fanboy journalism. Open dare. You show us someone better at disarming bands and stars.

Art Fuentes draws a battle between Santa and Jesus. Blasphemy! Jesus uses his hand stigmata as a beer bottle opener.

Ayn Imperato revels in taking a step away from San Francisco down to Cayucos, Mexico rocking the fuck out while the whole place unhinges, and realizing that every good song deserves a fist.

Gary Hornberger finds the irony of working for a company that's dodging a class action suit for making workers work off the clock is the same company forcing him to sign an "Ethics and Compliance" contract. Then he gets down and reviews some comics.

Felizon Vidad imagines a world where dolls rule, where women take the power positions in the world's political structure, and hopes of reverting our society currently steeped in violence, hate, and aggression.

Designated Dale wonders why so many people are stupid fucks that sue companies for their own shortcomings.

Money hobnobs with the dread pirate Captain Morgan in Philadelphia, then pulls a Jedi mind trick on a bouncer while serving duty as an emcee at a reading.

Rich Mackin gets bikey - explaining the ins and outs, up and downs and pedal cranks of the gas-less revolution.

Sean Carswell pulls up a stool, cracks his knuckles, and tells a hard-to-write, easy-to-read story that gets to the gist that the toughest street fighter in town and the toughest nation in the world have only remained that way for a very, very short time. They've always fallen.

The Rhythm Chicken reminds all you slick slacks to beware of hooshwash. He's the chicken wielding the ruckus logs. He's the physical embodiment which, once again, proves that looks and absurdity far outweigh professionalism and musicianship. Hail the Chicken!

Shawn Granton's comic offers a one-time exclusive. For 36 payments of $99.99, he will create a brand new style of music that you can cop and call your own. Buy your own originality today!

Plus, as always, hundreds of record reviews, the Razorcake top 30 7"s, book reviews, zine reviews, extensive record company listing, and the comforting feeling that holding a magazine can provide. Feel the newsprint soothe you. You don't need a computer to operate it.