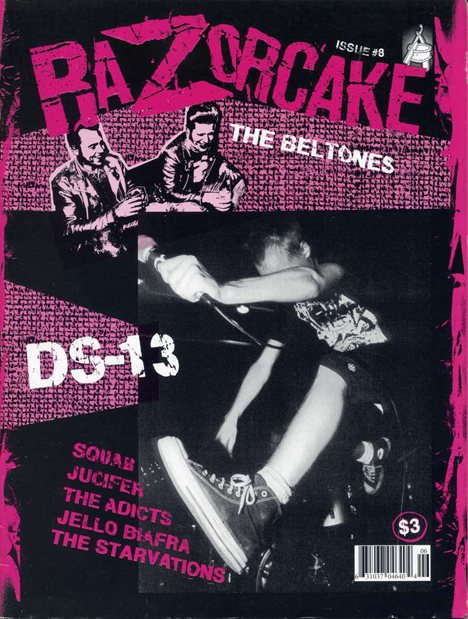 Here's Razorcake #08 in a free, on-line format. Definitely not as cool as in print, but that's why we're giving it out for free.

Interviews with
The Beltones: Interview by Sean Carswell. Find out what went through their minds when their van was obliterated.
DS-13: Interview by Matt Average. Find out what force can't be stopped by international terrorism.
Jello Biafra: Interview by Nardwuar: How the hell does Nardwuar know where Jello's parents honeymooned, down to the hotel?
Squab: Interview by Kat Jetson and Jen Hitchcock. Find out which one of them really likes glue.
The Adicts: Interview by Money. The Adicts formed in the late '70s and were part of the next wave of British pop punk. They enjoyed considerable success not just at the beginning of their career but well into the '80s and '90s as well.
Nero Burns: Interview by Graham Russell: London trio Nero Burns take unvarnished 1950s rockabilly, turbo-charge it with 21st century technology and tart it up it in glistening fetish-y PVC and fishnets.
Jucifer: Interview by Harmonee and Kat Jetson.
The Starvations: Interview by Todd: The Starvations make instantly identifiable music. It's as red as blood, slippery as sweat, as invisible yet tangible as a soul.
Hollywood Hate: Interview by Designated Dale. This five-piece band of well-seasoned, veteran punk rock fucker-uppers, all who have paid more than their fair share of dues in this dirty business called rock'n'roll.