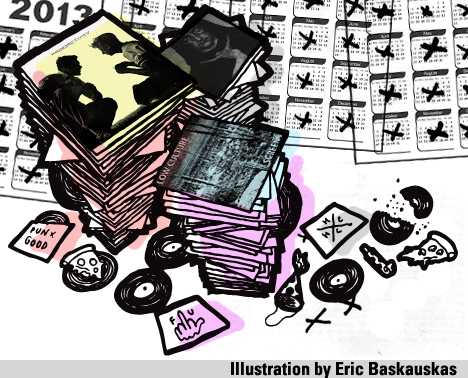 Razorcake Friends and Family Top 10s of 2013: It smelled like piss everywhere and I couldn’’t have been happier.

Welp, it’s been a damn good year for music. Everything else is fucked, but the music keeps coming. We asked Razorcake friends and family to give us their Top 10s of 2013 and their lists illustrate how much good music came out last year. It was hard to pick just ten. Well, we tallied up the numbers with our bottle cap abacus and came up with the Top 5 Records of 2013. It’s been angry, it’s been weird, and it’s been awesome. Hope you ding-dongs have been paying attention. –Matthew Hart

Craven Rock
Stuff I Got into in 2013
• Hip hop/rap: Rap is more interesting and relevant in recent years than perhaps it has ever been. Simply scratch the surface and you’ll find a non-stop dialogue and exchange of ideas. The old, insecure, hyper-masculine guard is being challenged by queer rappers like Mykki Blanco and radical rappers like Doomtree who attack not only the materialism and male hegemony in rap but the rugged individualism that’s been woven into its very fiber. Shit’s breaking open and you can find all kinds folks demanding to be heard, like autistic rapper Dan Bull or stoned Kalamazoo shut-ins Depressive Tongue Posse. The OG’s like The Coup, El-P and Topr are aging into their thing far better than any Baby Huey rock band. Not to mention the crazy beats and production I’m hearing out there. There’s a third option between watching the throne or not watching the throne. It’s ignoring the damn throne and taking a look around.
• Tie: P.O.S, We Don’t Even Live Here / Doomtree, No Kings: Doomtree is a hip hop crew. P.O.S. is part of it. Both albums throw attack the “I’ve-got-mine” status quo that has been dominating hip hop by simply throwing the doors open to everyone calling for unity and mocking not only the most transparent demons like sexism (“that girl’s not white/she’s an anarchist”) and materialism (“we don’t want any of your stuff”), but also by offering community instead of individualism (“why don’t you roll with us”), doing your own thing instead of fronting (“I’m in the back with my weird friends”/ “we ain’t even looking at y’all”) and refusal of capitalist alienation (“everybody in the club get whiskey/burn the club down if you’re spending more than fifty”). To quote the crack-smoking revolutionary in my favorite movie Floundering, “self-preservation’s what’s real...” You’re getting real, Doomtree.
• RVIVR, The Beauty Between LP: I’ve had an on-again-off-again relationship with RVIVR’s music and records over the years. While I’ve liked some of their stuff sometimes they seem didactic in lyrical content and too honeyed in delivery. The Beauty Between changed all that, a concept album on mental struggle and anguish that expands so far from their usual pop punk that my friend said, “This sounds like an entirely different band.” While just as catchy and listenable as ever, they’ve expanded their sound into a grandiose, shimmering and feverish call to arms. This is a black-eyed, clothed-in-rags, dragged through the mud into a hard-earned but unsound redemption. This is pop punk’s Shape of Punk to Come.
• Emily Good’s campaign for sheriff of Rochester, NY: In 2011, my friend, Emily Good made national news after being arrested videotaping the police from her own front yard. She became a reluctant hero and a spokesman against police brutality and racial profiling in Rochester. In 2013 she ran for sheriff—not to win—but to speak out against the same, as well: the racism and classism in the criminal justice system. Punk as fuck! Seize the time!
• Down All the Days by Christy Brown: This is by far the best book I’ve read all year. I get warm fuzzies simply recalling passages.
• The Coup, Sorry to Bother You: The Coup rarely disappoint, but this is a fucking stunner. I’ve been bumping this one ceaselessly. If you don’t already have it, pull up “This Year” on Youtube and get to ready kick down that door in 2014.
• Tie: Cometbus #55, Pen Pals by Aaron Cometbus / 45 RPM: Radon by Aaron Cometbus and Travis Fristoe. Unflinchingly honest and ceaselessly relevant these old school zinesters hold tight.
• Kylesa with Blood Sacrifice at the Triple Rock . Dude, I cried.
• Behead The Prophet N.L.S.L, Hysterics, Body Betrayal, The Need at The Vera Project
• Modern Life Is War, Fever Hunting
Honorable mentions: El-P, Cancer 4 Cure, Mountain Goats, Transcendental Youth, National Wake, Walk In Africa 1979–81

Jim Joyce
1. Santullo’s Pizza still has better punk flyer coverage and music selection than Reckless Records and they serve pizza and beer. Be informed.
2. A new year, a new zine from John Porcellino, check out King Cat #74.
3. Caroline Paquita’s awesome Womanalistic zine with episodes of punx illustrated and other wonders.
4. Print is undead—Chicago Zine Fest (March 14th, 15th) sold out table registration in two hours.
5. Zinester Dave Roche of On Subbing and About My Disappearance put out his new finely printed release, If Nothing Else, the Sky—punk travels in Australia and Southeast Asia, dig it.
6. The sad loss of Uncle Fun novelty shop is balanced by the perseverance of Mr. Ash’s Magic Shop.
7. Lo and Behold Records (Hamtramck, MI)—Is it haunted? Ask! Cheap records? Yes!
8. There is a new copy shop and self-publishing space in Chicago! CHI*PRC, put together by local zinester, Johnny Misfit.
9. Lucking out and getting into a rock lotto group. Thought it was as elusive as the Sasquatch, found out it actually exists.
10. More scraps of bike lanes added throughout our fair city, generally less anxiety.

Joe Dana
Top 10 Stuff I Listened to a Lot in 2013
1. Radioactivity, Self-titled
2. French Exit, Guts and Black Stuff
3. Low Culture, Screens
4. RVIVR, The Beauty Between
5. Neighborhood Brats, No Sun. No Tan.
6. Iron Chic, The Constant One
7. Ghostface Killah, 12 Reasons to Die
8. Rumpsringer, Stay Afloat
9. Night Birds, Born to Die in Suburbia
10. Crusades, Perhaps You Deliver this Judgment with Greater Fear than I Receive It

Juan Espinosa
• Despise You / Excruciating Terror live at Colony warehouse, Gardena CA: Daryl says that perhaps the only reason I’m smitten by Despise You is because they’re from my hometown of Inglewood (well, technically only Chris Elder is) which is partially true but that doesn’t explain how a bunch of kids that are obviously not Inglewood residents knew every single word to DY’s songs when they don’t even print their lyrics. Then Excruciating Terror blew everyone’s head clean off their shoulders, sounding more like a band that plays every week as opposed to one that hasn’t played in more than fifteen years. It smelled like piss everywhere and I couldn’t have been happier.
• Mellow Harsher, Self-titled EP: Wisconsin degenerates hammer out what I can only describe as an audible PCP trip. Crossed Out at a crack cocaine buffet. Indulge.
• Ancestors, III LP: Blown-out black metal played by a pretentious, ghost-chasing art school dropout. Best album artwork of the year, by far.
• La Luz, Damp Face EP Cassette: A demo that sounds better than most bands full lengths. Dreamy surf garage rock flawlessly performed by four ladies who nearly met the same tragic fate as the Exploding Hearts. Whatever doesn’t kill you…
• Radioactivity, Self-titled LP: Radioactivity is to the Marked Men as All is to Descendents except they didn’t name themselves Ghosts. Buy two record players and two copies of this album. Smear opposite sides of the record with super glue and slap each one on separate turntables because you’re never going to want to stop listening to this pop punk masterpiece.
• Slight Slappers, Capitalist Casualties live at the Baldwin Park American Legion Hall: Tokyo thrash stalwarts fly out to the West Coast to grace us with their first appearance on American soil since 1998. Powerviolence veterans Capitalist Casualties were the cherry on top. Dreams do come true.
• Los Angeles Dodgers: DASONO night at Dodger stadium, playoff run, Yasiel Puig’s debut, Juan Uribe’s three home-run game, and Clayton Kershaw’s second Cy Young award.
• The Repos: Every goddamned thing they put out this year: One cassette, three 7”s, a live 12” and each one is maniacal hardcore gold. I have the Record Store Day, mailorder-only on clear vinyl, and test pressing with alternate artwork version of their 12” Live Munitions. Don’t fucking judge me.
• Rough Kids, The State I’m In LP: With any luck, decades from now this record will be regarded in the same light as Los Angeles, GI, Damaged and other essential L.A. punk rock milestones.
• Belgrado, Siglo XX LP: Post-punk by punks for punks. No Siouxsie Sioux aping. No “Goodbye Horses” synth bullshit. One of the guys is wearing a shoestring headband but I’ll give him a pass.

Rene Navarro
1. Interviewing bands for Razorcake
2. Punk shows at The Bike Oven in HLP.
3. Spokenest, We M●ve 12”
4. Getting my Blue Belt in Brazilian Jiu-Jitsu
5. Sean Carswell, Madhouse Fog (Manic D)
6. Having been able to be friends and train with Joe Camacho a lot before his passing.
7. The record player in the living room tied with pizza and weed.
8. Getting on the air for Thirsty Thursdays presented by The Dollar Boys on KCHUNG 1630AM.
9. Badlands, So Little Cassette
10. My wife and Kimura moving to Barf Space, tied with being alive and shit.

Ryan Nichols
• Factory Records in Costa Mesa, CA (All around best record store around)
• Rocket From The Crypt Halloween night
• Hugh Cornwell solo acoustic set at the Bronson Bar
• Outsleazed Fest (Reno, NV)
• The Make-Up reunion at the Glasshouse
• Being able to contribute to Razorcake
• Mark Lanegan at the Troubadour
• Cleaner From Venus reissues on Captured Tracks
• Queens Of The Stone Age, ...Like Clockwork LP
• Neighborhood Brats, Birth Right 7”