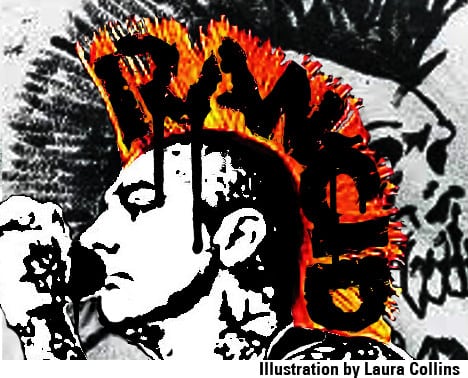 The sky’s black, like charred lime or pepper spiked with gunpowder.

The sky would be opaque if it weren’t for the lights, caressing cupids dancing in my eyeballs. Sunlight, streetlights, starlight—what’s the difference? I just wanna have a good time. This city’s so dead—halfway to decay—but it’s nights like this that make me feel like living’s worth it.

Rancid is more than a band to me: it’s a mental mecca, a slice of nostalgia, and a heaping spoonful of liberation. And Out Come the Wolves was my first proper punk album (next to Never Mind the Bollocks,of course). I remember tearing the plastic, pubescent angst scrubbed clean with glee.

Spinning that record woke me up.

You could break it all down to vibration and timbre but I will always see music as magic, no matter how many times science tries to reel it in.

The best bands don’t fade with age; they grow up with you.

Back at the show, I’m babbling now, “Oh, I hope they play this or that,” or “Wouldn’t it be great if they played ‘Journey to the End of the EastBay’ or ‘Bloodclot’ or ‘Roots Radicals’ ...?”

There are mohawks and patches on surly, sweet-faced fans—six or so of whom are lined up when we tumble downstairs. There’s already sweat, burning hearts, and eager (or glazed-over) eyes. The stink of weed and camaraderie is already so intense my head spins.

Welcome to the wait. We talk, nibble protein bars, sip, kick, and giggle like the kids we once were. Remember when things were simple, easy, innocent? Nah? Me neither.

But what’s it matter? We’re here. The line congests, lengthens, and multiplies. I suckle every minute, epidermis a thunder on my bones. Everyone’s a friend I haven’t met and likely don’t want to. But we’re bonded ‘cause we’re all here to score, craving the exact same hit.

I’ve never heard them or heard of them, but I’m open to anything that’ll inspire me. We just want a reprieve from the cages in which we’re confined. That’s what the sound’s all about—escape.

Most people have gone to the bar, content to guzzle while we crush ourselves close to the stage. We’re close enough to pretend we’re a part of something. You’re right beside/behind me, pores primed to suck in all surrounding adrenaline.

They hop onstage sans ceremony, belting it before they ask if anyone’s ready. I’m sucker punched. It’s marvelous. My hips move on their own accord, given enough free space to gyrate any way they please. It’s bloody brilliant when the opening act’s this good—you get all the movement and none of the cracked ribs that usually come once the crowd surfers decide to wreak punk-worthy havoc.

I’ve got dance-lust for that strum-heavy, up-tempo ska. It’s the anthem of the optimistic and oppressed.

Suddenly, Tim Armstrong exists, not only in my ears but my line of vision. His lips are out, curled somewhere between a grin and a pout. His fingers are dawdling with genius on the strings.

Cheers deafen me. I blink. I thought when I’d first see him I’d scream, girly groupie boner shooting up from the plaid pants of my heart. But I’m not fluttery, not anxious, not even bridling anticipation. It’s like I’ve come home, y’know? Every second is precious and corrosive. They’re sharp enough to writhe on a razor’s edge, all frolicking footwork and power chords.

Aimee Interrupter looks right at me while she sings “Can’t Be Trusted” as if she knows me.

The stage is black, iced to the rim with floorboards and amps. The crowd recedes, fondling impatience while I’m stuck, glued, and trembling. Why would you leave when the show’s about to start? I know the throngs are sucking more swill only to come crashing down on us when the magnets start to hum, a fermented, teeth-cracking wave.

Enter the liquid. Some guys are saturated with idiot.

Armstrong, Lars Frederiksen, Matt Freeman, and Branden Steineckert are gleeful, fluid machines, well-oiled with creative lubricants. They have organs, toenails, divorces, and leases. They’re people, the sort who can smash a stage and save your soul. They’re the type you can make into anything you need them to be.

With all this thrashing my bleach is going to leak. Everyone’s already soaked; beer, water, perspiration, and excited spit flinging in the air and sticking to blemished skin, as refreshing to us as sea air or summer breezes. The band’s more drenched than the crowd.

Can’t. Hear. Can only. Hear the screams. Everyone’s in overdrive and even us sober ones are in sensory seizure. In line there may have been girls sizing up girls while the guys size up all of them, but now we’re a family. Gender, dress, and occupation are irrelevant.

The crowd’s melted into a single, organic compound. Stray sneakers and ball caps are lurking testaments to the outside world we’ve left behind. But we don’t have to bother with reality yet.

I’m crushed, bruised, and drenched in sweat. I’ve never felt more beautiful. That’s why music’s wonderful: it takes all your inner (and outer) ugly away.

With every strum, they come to our rescue.

I want this noise forever.

I duck at the cameras, flying shoes, and missing phones. The kids take “I Wanna Riot” a little too literally. I keep watching Armstrong. He’s skulking like some poetic Neanderthal. I’m fascinated by the casual movements in his wrist.

Couldn’t the world be this? I can’t stand to go back outside, not after bursting with this much red-hot moonshine. Outside, responsibility waits hand-in-hand with bank accounts and complicated relationships. I don’t want to leave. I don’t want to go back. I want to freeze and forever mosh.

Everything’s bubbles breaking. I don’t remember the last time I smuggled this much dopamine past the baggage check of my brain. I always knew music was my escape but never knew one band could become my very own tropical island.

Is it wrong to objectify them, even if I see them as paradise?

Paradise is over, and this time it’s definite. They’re ripping scraps, unplugging amps, and most of the fits are filing away, coming back into their shells of singularity, remembering those social boundaries we all silently swore to eschew.

Weren’t we a movement? Didn’t this mean something?

Armstrong’s coming up to the edge of the stage, dangling paper strips to the remaining crowd. I wish he could see me reaching with the rest of them.

There are so many hands, grabbing. I’m not going to reach. He doesn’t even see me. I’m just one face. There are so many other hands. When they touch the paper, he pulls back. He shakes his head, pointing like he’s pointing at me. He leans further, almost all the way off the stage, aiming the paper until it’s touching my fingers, crawling against my knuckles, happily collapsed into my shaking grasp.

When a moment’s this perfect, all that can come out of your mouth are the stupid lines you swore you wouldn’t say.

“Thank you; I love you!” I gargle against his back, wondering if he realizes he saved me tonight.

This is solid silver, liquid ecstasy. It’s the best lay of my life and we don’t even touch hands.

Fuck man, chop off my clit, wrap it in tinsel and donate it to charity. I don’t require any intimacy beyond this.

I’m set—I’ve got the setlist.