Queers, The, The Mansfileds, The Hot Toddies, The Atom Age: June 19, 2009 @ The Knitting Factory, Hollywood, CA By Marcus Solomon

The queers put on a great show in Hollywood, and the band by the same name also put on a great show at the Knitting Factory in the same city. This was one of those gigs where the vibe was so positive throughout the entire night that it almost seemed surreal. Everyone seemed to be in an uber-bubbly good mood that served to add exponentially to the multiplicative enjoyment factor. On top of that, I got to take two gig virgins to their first live concert, one of whom has a significant social-anxiety disorder and this show turned out to be delicious and effective medicine for him. Of course, they both had an exceptionally wonderful time and now, for the rest of their lives, they will have to tell people that their first concert experience was with The Queers in Hollywood.

First up was The Atom Age, from my most favorite town in the world, Berkeley, California. Unfortunately, I did not get to hear much from this five-member punk-ska unit, because I had to go buy batteries for my camera. What little I did hear was pretty damn awesome. It reminded me of the frenetic, bendy, delivery of The Mormons mixed with the energy and ska-fusion of Voodoo Glow Skulls. I was really bummed to see the band packing up just as I returned. At least I got to hear enough to whet my appetite for more. Seriously, The Atom Age is worth your time, so go to: www.myspace.com/theatomage, and these guys just put out a split EP with The Queers on Asian Man Records.

We were then treated to the sweet, intoxicating sounds of The Hot Toddies. I was all pumped-up after my one hit of The Atom Age, so the abrupt energy change kind of confused me. These four talented young ladies are adept musicians that produce a bouncy, happy, indie-college kind of sound that is cleanly wrapped in girlie harmony that is reminiscent of the do-wop style of the 1950s and the folksy-surfy early ‘60s. This was especially the case during the song, “HTML”, which is a traditional ‘50s number in the same vein as The Penguins’ “Earth Angel”, but with a humorous, Internet-based, love theme. As I sit here writing this review, a friend of mine, who is listening to the band on the Internet, just said, “I would really like to see this band live, because they have really great harmonies.” The venue started to fill up and the alluring Hot Toddies had the majority of the crowd dancing happy little jigs. At times, I thought the members of this band could easily be doing soundtracks for deep, animation art students and/or hosting an NPR radio show. I was lulled into a pleasant trance, but personally felt a bit frustrated because the music never really cut loose, but it wasn’t supposed to. This is what it is: www.reverbnation.com/thehottoddies.

The penultimate band of the evening (that big word means second to last), was an exceptionally pleasant surprise because The Mansfields fucking rock and it’s always good to add another group to the never-ending list of bands to love. I honestly thought this was the best band of the evening and they came dangerously close to stealing the show. The Mansfields is a tremendously versatile three-piece that cranks out high-octane rock ‘n’ roll that blends and drifts through the realms of punk, garage, glam, surf, horror-rock and more. It takes a lot of skill to make me enjoy a Billy Idol medley, but these guys had me “Dancing with Myself” despite my disdain for anything Mr. Idol did after Generation X. I had lured my apprehensive and socially-awkward associate to the corner of the front of the stage, right in front of the lead guitarist, and once The Mansfields began to play, his eyes got huge and his head started bobbing. “I can feel the music in my chest! My feet tingle!” He excitedly yelled in my ear. So cool! It was truly impressive to watch and listen to how the trio moved in and out of roots-rock, Cramps-style sexy-doom and gloom, to Munster-inspired surf, New York Dolls glam, and Ramones-inspired jack hammering. Standout moments included the Billy Idol medley, a tribute to The Ventures,  another tribute to Lux Interior of The Cramps, a loving cover of The Vibrators’ “Amphetamine Blue”, and a couple of originals like the ‘50s-punk-surf “Frankenstein Twist”, and eerieily-dripping “Night of the Living Creeps.” Joe Queer is going to produce The Mansfields’ new album. Find out why by visiting: www.myspace.com/themansfileds 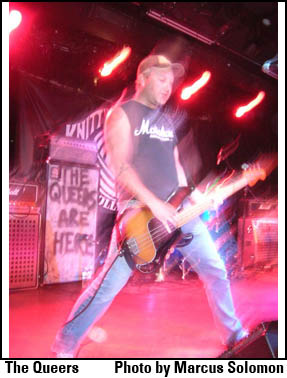 Finally, it was time for The Queers. I’m not much into the poppy-punk stuff, but I was anxious to finally enjoy this band live after somehow missing it year after year. I was not disappointed. They played plenty of the older, harder stuff like, “This Place Sucks” (twice), and the sort-of hard stuff like “Fuck This World” and “She’s a Cretin.” Clearly, this was the most popular band of the evening, but after a while, I began to notice that The Queers are sort-of in a rut; good, happy, energetic rut that visibly works for them. Almost all the songs are of the same relative tempo and usually have the same basic arrangement. Even so, that did not stop the energetic and delighted fans from bouncing all over the room in reverie. The slam-pit was churning up wind like a multicolored human fan, but strangely enough…nobody was stage-diving. The band kept things interesting by inviting The Hot Toddies back onstage to sing back-up for a couple songs and then, founding member Wimpy got up there and belted out five old ones that included “Tulu is a Wimp”, “I Want Cunt”, “Monster Zero”, and “This Place Sucks” (again, during the encore.) As an added attraction, show promoter and former Queer himself (another pun intended), Sean Rowley was called to the fore and displayed his prowess on a classic sunburst Les Paul; impressive. I liked the songs that Sean and Wimpy played the best, because it was uglier, and the second guitar really filled-out the overall sound. “That was fun, Marcus! I didn’t even get scared! Said my socially-anxious friend, and I was proud to have shown two newbies a wonderful time at their first punk rock show.
http://www.thequeers.com/