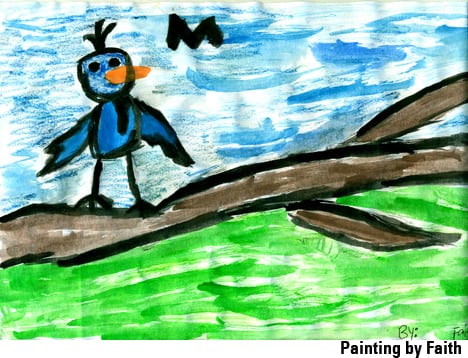 Punklightenment: To Save a Mockingbird

He was with us for only a short time, but the baby mockingbird sang for us a meaningful and bittersweet song that is thousands of years old.

I have been told when the Buddha was still a boy named Siddhartha, he tried to help a butterfly emerge from its cocoon. Despite his good intentions, the butterfly floundered and quickly died. Siddhartha’s father explained to his son that the butterfly died because it was supposed to struggle as it freed itself from the cocoon. It is the struggle that develops the muscles that allows the butterfly to fly. Without that struggle, the muscles did not develop and consequently doomed the creature to death.

A few months ago, I saved a fledgling mockingbird from the street. The bird’s mother and father were desperately dive-bombing their offspring in a frantic attempt to prod him from the dangerous street. Being a reflexive rescuer, I pulled over so I could scoop him up. As I entered the traffic lanes, a huge, Hispanic-looking gangster type in a large, black SUV steered directly at the baby bird. The front tire of the vehicle actually brushed the bird’s body but failed to squash him. “You fucking asshole!” I shouted as he drove slowly past. He stopped and shouted back, “What are you going to do about it?”

“Nothing,” I said quietly to myself. “I’m not going to do anything.”

Relieved to see the dark vehicle of death move slowly away, it occurred to me that the fearsome driver looked kind of like the grim reaper. “Well, he didn’t get this little one,” I thought to myself as I picked up the defiantly squawking tiny creature and walked back to my car. It didn’t fight me and seemed to understand that I was trying to help him. The fuzzy fledgling sat nervously in my hand, but did not try to escape.

At home, a quick internet information search revealed that I should have just taken him to the side of the road and left him there. Fledglings leave the nest before they can fly, hiding in bushes and other natural cover while the parents continue to feed them until they are strong enough to take flight. After driving back to the vicinity of where I found the bird, I realized that I could not remember exactly where I picked him up. I also wondered if the parents were still around an hour after their chick disappeared. “Well, if he’s gonna die, I might as well try,” I thought.

His new home was a used hamster cage and his appetite was ravenous. Our new little friend was growing fast. The stubby tail feathers grew long, and the fuzzy feathers of infancy had all dropped away. He was sleek, strong, happy, and had strongly imprinted on my mother and me. He would get excited and chirp loudly whenever we walked into the room, and had learned to make short flights out of his cage door to land on our shoulders. It was our intention to eventually release him into the wild.

One day, some of the young children at my tutoring center took him out of his cage so they could play with him. The kids squealed with delight as they tossed the bird around the front lobby while I was in the back room teaching. When I saw what they were doing, I quickly ran over and discovered that one of the bird’s legs had been broken. I knew the kids meant no harm, and they explained they were trying to help him fly, but it made me very upset. My mother was furious. We made a cast for him out of a split drinking straw and some plastic tape. Online information advised leaving the “cast” on for about a month, allowing for the leg to heal. Unfortunately, the little bird could no longer stand and he often had to sit in his feces and urine until we could move him and clean his tiny butt. Consequently, our tough little friend developed pus-filled infections around his anus and belly. He stopped gaining weight, stopped singing, and the downy feathers on his underside were rubbed away, leaving raw, exposed skin covered in sores. We called a veterinarian, who informed us that it was illegal to harbor any wild bird, and if we brought it in for treatment, it would be confiscated and destroyed.

One of the sores became a huge, bloody pus bubble on his little belly. I lanced the wound with a sterilized needle in order to drain it, but his skin was rubbery and thick. The needle did not go through easily. It was torture for both of us. The poor little thing just lay on his back in my hand, mouth open, screaming in silent agony, eyes wide and full of fear. Even so, he still trusted me. He did not try to escape. Those eyes… those pleading eyes… I thought of the Buddha story I had been told and realized we were in the same situation. I decided at this point to name him “Tuffy” because he had endured so much suffering and kept on trying to fly.

The straw cast was removed a month later and revealed a healed leg that was fused straight. He could not stand or sit properly and was always in considerable discomfort. A few days later, my friend Cathy noticed that Tuffy was dying. He was in his cage, lying on his side, eyes closed, body almost stiff and cold to the touch. In desperation, I found an old antibiotic capsule in my desk drawer. Quickly mixing the contents with water, I pulled Tuffy’s beak open and squirted an eyedropper full down his throat. I cupped his ravaged body in both hands and blew warm air on him. This continued for more than three hours. I also spoke softly and whistled to him. If he was going to die, at least he would die warm with the familiar sound of my voice and whistle. Suddenly, he opened one eye, then the other, slowly stretched his wings, and painfully tried to move forward closer to my body.

Salvaged antibiotics kept Tuffy going for a couple more weeks, but it soon became apparent we were just prolonging his suffering and he was never going to fly. My mother decided to stop giving him the medicine and she let him go. I came home and found him in his shredded paper nest sitting up, head straight, and free of pain. We buried him in the backyard in a Christmas cookie tin box with his fallen tail feathers next to him.

It was just a bird, but when we take the time to care for a sentient being, we become attached.

Today at Huntington Beach, I saw a crying boy who told me he was lost. I smiled to myself as I thought, “At least I know not to take this one home.” I walked him to the nearest lifeguard tower where he was quickly reunited with his family. Overhead, the seagulls and pelicans soared free.  I thought of Tuffy and a poignant maxim a Buddhist monk once told me: “The morning glory lasts only a single day, while the mighty redwood may live two thousand years. Both are equally beautiful and equally important.” I wish Tuffy could have flown higher and longer.