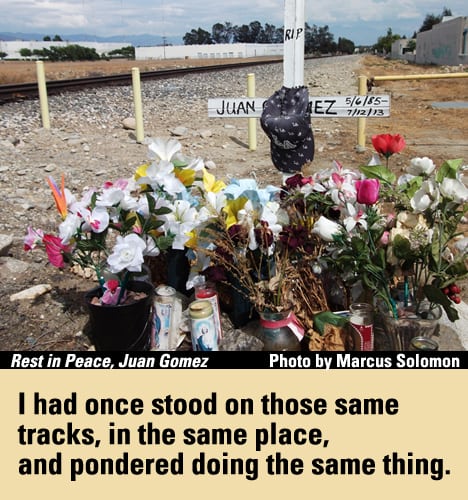 Punklightenment: The World Won’t Stop Without You

Do you enjoy our columns on Razorcake.org? Razorcake is the first and only official non-profit DIY punk rock fanzine in America primarily dedicated to supporting independent music culture. Please help keep us rolling along and consider making a tax-deductible donation to us. If you are reading this before December 31st, 2013, check out our year-end incentives!

Something terrible had happened; it was obvious even from a distance in the dark. The Metrolink commuter train was stopped on the tracks. Yellow police tape cordoned off the area. Somber-looking police and emergency personnel walked with their heads hung low. I slowed my car to a stop and scanned the scene for a smashed car; there wasn’t one. Somebody got hit and killed by the train. It was a suicide. Even before I reached the scene, it felt like a suicide. It was as if that person’s despair shattered upon impact with the train and rained down on everything and everyone nearby. The body was unseen, somewhere in the shadows down the tracks. I wondered who it was and why he or she took their own life. I felt sad for that person and for all those who cared about that person. It felt strange to care for someone I did not know, but I am one of those who reflexively care about others and that particular spot was significant to me. It was only a couple blocks from my home. I had once stood on those same tracks, in the same place, and pondered doing the same thing.

It was in the paper the next day. A young man named Juan Gomez walked deliberately into the oncoming train. The engineer reported that he made eye contact with Juan just before the train hit him. A couple days later, a homemade cross had been erected at the place where the tracks crossed the street and Juan took his own life. I drive past that location when I go to and from work. The cross called my attention. Someone cared for him. As the days passed, more flowers and Catholic votive candles were added. Later, Juan’s baseball cap and two rosary necklaces were added to the makeshift shrine. I was moved to write to Juan’s family. I wrote a short letter and taped it to the cross. It said that I did not know Juan, but I could see that he was dearly loved and that I felt sorry for their loss. It was signed with my name and address so the family could contact me if they wished.

I told him that I could not do that. “That is why you swim in the tears of other people.” That exchange had me puzzled for many years. How is it possible to care for others while walking away? Is it possible to have compassion without feeling sorrow? How can a person feel loving kindness for humanity while also cultivating the detachment espoused by Buddhist teachings?

About a week later, there was a knock on my door. I was met by a distraught-looking woman drenched in the sweat of a hot summer day.

“Are you Marcus Solomon?” she asked in a thick Mexican accent.

I told her I was.

“I am the mother of Juan Gomez. Did you know my son?”

I told her I did not. Apparently, she could not read my letter very well.

“Then why do you care?” she tearfully asked.

“Because Juan was a human being and so are you.”

We embraced for a moment. She told me the sad story. Juan was a special-needs person (she did not elaborate) who quit his job at a gas station because he was robbed at gunpoint twice. He fell two months behind on his rent at his sister’s house, so she kicked him out. Juan was too embarrassed to tell his mother, so he was homeless. That is why he committed suicide. Juan’s mother Angela went on to share that her mobile home had recently burned down without insurance and she was now forced to live in her pickup truck. She could not live with her daughter because her daughter was “crazy from army and Iraq.” Angela intended to gather Juan’s belongings and to commit suicide herself.

I tried to reach out to her but she was inconsolable. Remembering the Catholic votive candles at the cross, I suggested she turn to her church for help. She wearily rejected that notion and explained that a Catholic priest had tried to molest Juan. She had no faith in the church, but still believed in god. I then suggested finding solace in prayer, but with a blank look in her eye, she softly said, “This world has nothing more for me.” She declined my offer of friendship, walked slowly to her truck, and drove away. She left me standing there, swimming in her tears.

There are Buddhist monks and nuns who have conquered suffering; they are called arhats. They have transcended suffering through meditation and mental control. They know how to care for other people without being swept up by emotion. I cannot explain how they do it because I have only an inkling of understanding. For the rest of us, we are left to struggle with our human emotions. Lifeguards risk their own safety and get wet when they dive in to rescue someone. For those of us who are not arhats, we pay the price for feeling empathy. If you reach out, you get involved. If you dive in, you get wet and become part of the story. If you care, it is going to eventually bring you sorrow. This must be accepted.

The cross by the tracks is gone now. The railroad company took it away. I look over and see the mound of rocks where it once stood. I look over and see the empty space where a human being once walked. Late one evening, I walked to that place and remembered the time when I considered making the same fatal decision. The thought of the immeasurable pain it would bring to my parents is what dissuaded me from doing it. In my mind, I could hear the Bad Religion song, “The World Won’t Stop without You.”Yes, that is so true. Every single thing we do, no matter how seemingly insignificant or acted upon out of emotional impulse, sets in motion a chain of events that continue onward. We must think before we act and consider how our actions might affect other people. The train continues to move forward…with or without you.