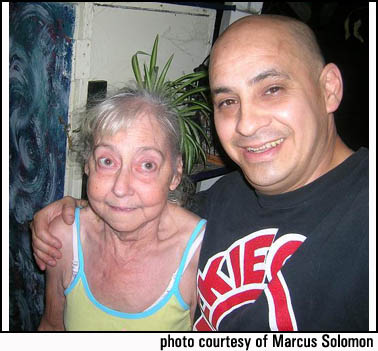 “You need a license to own a dog, but any idiot can have a kid!” I don’t remember the name of the movie it came from, but this quote is so true that it has remained in my mind for many years. It exemplifies one of the many ways that our American society has things entirely bass-ackwards. The quote is in regard to the mistreatment of children, but it also speaks to the larger picture of showing kindness to other human beings in general. Showing kindness to your fellow human being is very easy to do, there are countless opportunities to do it every day, and there is no reason why YOU cannot make the world a better place by simply showing a little empathy and benevolence.

Those of us who have adopted the punk rock mindset—with all its relative variations—have made a conscious choice to become “outcasts” in some manner. That choice was entirely ours to make, and how you choose to identify with punk rock is entirely on your own terms. Most of the homeless and abandoned people in this wealthy nation did not make this choice for themselves. Due to circumstances beyond their control, the vast majority of homeless and abandoned individuals had the status of outcast unwillingly thrust upon them. The National Alliance to End Homelessness estimated in 2005 that there were approximately 744,000 homeless people in the United States. Most of them are mentally ill and many are the victims of abuse, be it in the past or the present.

We Americans like to think we are empathetic and generous, but when it comes to the homeless, most people simply turn away; maybe because it is so much easier to aim our sympathy at a cute puppy or kitten. For others, it is easier to completely ignore the needs of other sentient beings by plunging their ostrich-like heads into the sands of self-indulgent and disposable consumer culture. Hell, if you can take a moment to pick someone off the floor in the slam pit, you can also take a moment to lift the spirits of someone who is on the street. It can be something as simple as a smile and saying, “Hello.” If you don’t want to toss them some change because the dirty stray human might buy drugs or alcohol, then toss that unfortunate soul a bag of chips or something.

About two years ago, I was having one of my occasional crises of self-doubt. It was Christmas Eve, and I had been thinking—not drinking—too much. I felt like a failure because my small tutoring center business was barely surviving. I was feeling down because I work so damn hard and have very little to show for it. I grabbed some food and made my way to the learning center at something like 3:00 AM. I just wanted to sit and think; to meditate on the situation in order to make a decision. When I got to the office, I saw someone lying in the bushes. The weather was cold enough to turn the sprinkler water to ice. I thought maybe the guy was dead, but then I heard him sobbing. There was a shivering man quietly crying in the bushes next to my office as he trembled in the icy cold on Christmas Eve.

“Oh God!” I said aloud (even though I am a Buddhist). I went over and coaxed him out of the bushes and took him inside. I gave him my food and I found a big, knee-length overcoat that somebody left in the office a long time ago. I gave it to him and he quickly warmed up and he told me his story…which is not important here. What is important is that I was able to help my fellow human being; a brother of a different mother who shares this space called Earth. I also was given the blessing of being reminded that I was NOT a failure. My existence had MEANING and a sense of purpose. He warmed up, ate the food and happily walked away. “Merry Christmas brother!” He shouted as he walked into the night.

As a tutor, it is my business to help people of all ages to reach for their intellectual potential. As a caring person, it is my business to help others just as I would hope others would help me if I were in need. I no longer felt like a failure, and this man’s gift to me was to put me back on the path I had been on all along. The good feeling of helping others is very fulfilling.

There are some who say that kindness is ultimately a selfish act. That is true if your act is lacking in true empathy. If you help others simply to make yourself feel better, or to look cool to others, then it is a selfish act. But if your action comes sincerely from the heart, then it is an act of METTA (loving-kindness), and its natural result is a heightened sense of personal well-being. Those who accuse the generous of being selfish are just trying to rationalize away their own guilt for being self-centered.

Most recently, I went to a nursing home to see if any of the people I knew there were still living. It had been awhile, and consequently, the friends I made there were no longer in this world. On the way out, I met a woman named Barbara. She told me her story of abandonment. She told me she would rather die on the street instead of living in the lock-down, lonely misery of a nursing home. I gave her my number and we kept in touch. A few weeks later, she bravely launched herself back into the jaws of a mostly heartless world. It was pretty much an act of suicide. She ran out of money and had nowhere to go. She did not ask. I offered to take her in. “But I don’t even really know you!” she said. “Woman, you have two choices: Die on the sidewalk or live on my couch. Pick one now,” was my reply. With the combined consent and assistance from my mother, fiancé, and one very good friend, we all do what we can to make this ill woman’s final days relatively pleasurable.

So, now I have a new friend, a new sister, and a new grandmother all in the form of one person. It isn’t easy, and I am not suggesting that most of you go so far as to take a stranger into your home. What I am saying is that you can make the world a better place by doing something small. There are lots of stray humans roaming the fringes of this shallow American society. Since you are so punk rock and have chosen to live in or close to this fringe, it should be very easy to find someone who needs you…if even for a moment.