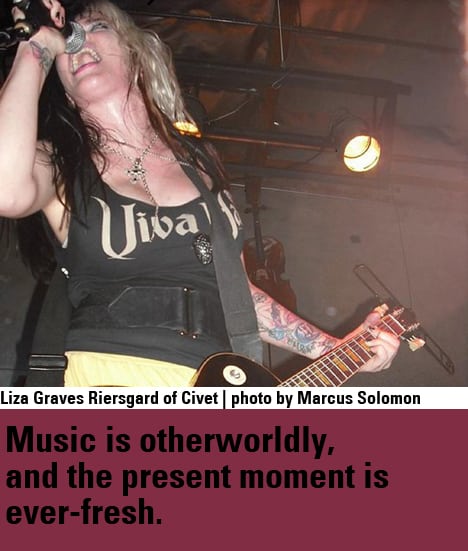 You’ve heard the song hundreds of times and it always seems new; especially when you experience it live. It’s amazing how some bands can keep that energy alive and fresh after playing for so many years when others tend to fade away or disappear. Hearing a familiar song can bring back many memories. Usually, we tend to remember the first time we heard it, or it brings back a collage of recollections, or maybe even a specific event is called to mind. When it happens live, that moment and the wonderful feeling it conjures is intensified. Each time this happens I am astonished, but soon remember that this transcendent experience is quite common at a live concert when the musicians are sincere and playing as one. I keep forgetting what I already know: Music is otherworldly, and the present moment is ever-fresh.

How is it that some bands are able to continually tap into this reservoir of ageless energy when others let it slip from their grasp? Why do bands such as The Dickies, The Adicts, Buzzcocks, Agent Orange, Narcoleptic Youth, Symbol Six, and many others still sound so great and remarkably new, even when a lot of what they do is old? As a music fan (not a musician), I have some answers from the observer’s perspective. I also put the question to a few musicians and they were kind enough to provide their input.

I have been going to live punk shows since 1981, and I have noticed over the years that some bands are running on the fading momentum of the past. Several bands come to mind, but I do not want to name them here. This column is not about trash talking bands. I am sure you can think of some bands that should have packed it in years ago, and a few others who attempted a lackluster reunion and quickly faded back into the shadows. No, this essay is about those bands that have somehow steered clear or have rescued themselves from the pit of triteness and the erosive nature of time.

What do all of the above mentioned bands have in common other than the fact that they have been around for decades and still rule? Part of the answer is sincerity and genuine effort. When someone truly enjoys what they do, that shines through. It is easy to see whether or not a musician is playing from his or her heart or from the ego. By nature, most entertainers have strong egos and that is what propels them onto the stage, but having a strong ego is not the same as being egotistical. The performing artist is nothing without an audience, and the cognizant artist understands that. Art requires an audience. Great bands play to the public as much as they play for their own love of music. Mike Palm, founding member and guitarist for Agent Orange, says, “The number one tool in the punk rock tool box is the Joe Strummer bullshit detector.”* The audience knows if the band is feeling it or not.

Durability is also important. Both the artists and the songs have to hold up over time. As time continues onward, some songs retain their staying power and others do not. We all have songs that we used to like in the past and now we just go, “eh” or maybe even cringe when we hear it today. I used to really like the Go-Go’s “We Got the Beat,” but it really doesn’t do much for me anymore. On the other hand, when I hear something like “Everything Turns Grey” by Agent Orange, or “If Stewart Could Talk” by The Dickies, I am “Feeling like I’m almost sixteen again” (to quote Pete Shelly of The Buzzcocks). The band members also must have the endurance to keep on going. It is very difficult for  people to keep on doing what they do when life keeps on throwing obstacles in their path. Famous bands might be able to travel in comfort, but most of the bands we punk fans enjoy are not privy to the lavish lifestyle. It is no easy task to cram a bunch of instruments and people into a van for hundreds, perhaps thousands of miles of tedious driving. They have to be truly dedicated to their craft and their fans in order to travel to the gigs in whatever vehicle they can afford and somehow tolerate each other.

This brings up the issue of getting along. A band becomes like a family and has to function as a cohesive unit. Jay Sin, guitarist for Narcoleptic Youth, says: “It’s a difficult thing to get four or five people on the same level. Interpersonal issues in bands are more than likely to be the cause of giving up, not caring, or just half-assing it. It’s never fun dealing with people you are unhappy with at the moment.” Because music is an emotional expression, the emotions that the musicians are experiencing will come through in the music. If the band members are not getting along, that becomes evident in the performance. Infighting has destroyed a lot of great bands. Jay continues: “A band is a team. Sometimes, one member is an important driving force. When that person becomes a little burnt out, someone else picks up the slack for them. I just love making music with my friends and that is the bottom line. After seventeen years, this is still fun because they are still fun.” He also points out that money can be an issue as well: “Money does change people. We have no money, so we have not changed in that regard.” When a band has limited success, fame and fortune are less likely to be a negative factor. It’s a sad irony for the band, but good for the fans, who still get to see them up close.

Success is subjective. Being rich and famous are not the only yardsticks for personal accomplishment. Most of the bands that have stuck it out for a long time have developed a strong and dedicated fan base. The cult following enjoyed by some punk bands is significantly smaller than the crowds generated by mainstream musicians, but the connection between the punk musicians and their admirers is more intimate and certainly more satisfying. I just finished reading the Led Zeppelin biography, Stairway to Heaven: Led Zeppelin Uncensored, written by their former tour manager, Richard Cole. One of the most striking things I learned from this book is that the astronomical success of Led Zeppelin created a numbing boredom for the band members and also alienated the band from its fans. The members of Led Zeppelin were able to get whatever they wanted whenever they wanted and that got old real fast. Drugs, women, cars, travel, and virtually anything else they desired were delivered to them without hesitation. Consequently, the excesses of living lavishly soon became trite and dull. The enormous fame made it necessary for the band members to avoid contact with the majority of their fans due to death threats, theft attempts, and the never-ending parade of obsessed weirdos that bothered them to no end.

On the other hand, while punk bands may not be able to jet off to France just to have lunch, it also means the members of the bands we enjoy are more likely to join us at a late night taco truck on the sidewalk right after a gig. Punk bands also do not typically have to hide behind a wall of security personnel, so we are often able to approach them and actually have a conversation.

Mike Palm described what he calls “cassette guy.” “At some of the shows, there is this kind of person, usually in their 50s, who comes up and says something like, ‘My friend made this cassette tape of your band for me when we were teenagers; I still have it. Can you sign it for me?’ and then the guy pulls out the cassette that he has had for so many years! It’s moments like that I love to experience!” These moments of success may not translate into cash value, but they are valuable nonetheless. The approachability of most punk musicians and the blurring of the lines between band and audience make this genre more intimate and comfortable.

At the center of it all is this reality: A band continues to sound great after many years because the musicians are focused on the present moment. The songs may not be new, but the approach taken to playing them is firmly planted in the now. The air and energy of the new keeps everything current and relevant. Eric Leach, singer of Symbol Six concurs: “It’s great to honor the past, but it is the kiss of death to live in it; nothing grows there. [The punk rock scene] has accepted too many processed formulas and retread do-overs.” Mike Palm  agrees: “People do not always want to hear the song they have heard for years played the exact same way. Often, I think about how I can tweak a song and play it a little differently. Maybe growl here or bend a note there…and see how people react. You gotta keep it fresh. We also like to play in out of the way places where nobody expects us to play, like in Alaska, or in Yuma, Arizona. Those fans are even more appreciative.” I also asked Mike how it felt to see teenagers singing the lyrics to songs that were written before they were born. “It’s beautiful” he smiled. It must be a genuinely satisfying feeling of accomplishment to have created music that has stood the test of time and has brought enjoyment to so many.

A band that keeps its own creative juices flowing continues to sweeten what it has already created. This is not only true for musicians, but for all of us. Regardless of what we have accomplished in the past, we must continue to build upon that or everything will eventually come crumbling down. To keep things alive, we have to keep creating something new, while also seeking out new territory; stagnation is death. This is our scene and it exists because we have all created it. As Eric Leach puts it: “It was built by us, for us. It is our jet engine, built to go fast and far as possible until it explodes in flames! So start something and do it now!”
The now is always new. It’s the same thing the Buddhist monks were always telling me, “Be here now. There is no past. There is no future. All you have is today.”
Write to Marcus at: [email protected]

*In reference to the song “Garageland” by The Clash.