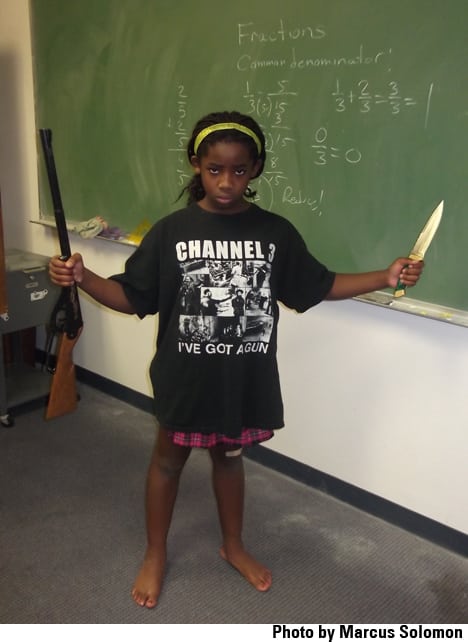 Punklightenment: I Got a Gun

I was writing the daily English assignment on the chalkboard when a teenage boy entered the classroom with a rifle. I froze with chalk still in hand on the board. Another male youth with a second rifle entered the room right behind him. In a silent panic, trying desperately to think of some way to overpower the expressionless teenagers, I noticed all of the forty students were calmly going about the business of preparing for another lesson in English conversation. The mass shooting I was expecting did not happen. It was then explained to me that in the jungle regions of Thailand, it is common for children (some as young as seven or eight) to carry guns and machetes to school because they might be able shoot an animal for dinner along the way, and the jungle foliage often requires chopping. With so many loaded guns and giant knives in rural Thailand schools, how come the kids aren’t all killing each other? Two simple reasons: They are not Americans and their exposure to violence is miniscule when compared to what we are subjected to every day on the news, in movies and TV shows, and in extremely graphic video games.

I believe that prolonged exposure to violent imagery desensitizes people to brutality and contributes to pushing unstable people over the edge. Academic research has not yet established a solid correlation between frequent viewing of violent graphics in video games and aggressive behavior, but it stands to reason that if viewing images did not influence human action, there would be no TV commercials or photos in print advertising.

When the most recent mass shooting occurred last December at Sandy Hook Elementary School in Newtown, Connecticut, the vast majority of the general public reacted with shock, sadness, and revulsion. We all agreed that something must change.

The big question is about what, exactly, should change to keep the general public safer from the next deranged person who decides to take out their personal frustrations on a group of unsuspecting citizens. It is going to happen again. That is so sad to realize. We know it is going to happen again because this is the United States and we have learned to expect it. Statistically speaking, the average number of mass shootings has not increased since 1980. According to criminologist James Allan Fox at Northeastern University, the average number of mass shootings in the U.S. has remained constant. There are approximately twenty per year, with a minimum of four people killed by gunfire (2012). Some people have tried to ameliorate this reality by saying: “See? Things have not gotten any worse.” Yes, agreed, and that exemplifies the problem. We have become used to the fact that about twenty times a year, some total asshole is going to randomly blow away a bunch of innocent people. The first thing that must change is our own mindset of complacency.

The other things that must change are to entirely ban semi-automatic, military-style assault weapons, high-capacity ammunition magazines, dum dums (expanding bullets), hollow point bullets, and to also require all gun purchasers to undergo a thorough background check. (No more gun show loopholes that allow the background check to be avoided.) Nobody needs to fire hundreds of rounds per minute to shoot a rabbit or to protect their home from intruders. Dum dums and hollow points are manufactured for the sole purpose of killing people with explosively shattering results as opposed to regular bullets that produce a clean wound preferable for game hunting.

All of the things listed above belong only in the hands of trained military personnel and police SWAT teams. Obviously, a person who murders the blameless is mentally ill. Therefore, we must also address the issue of mental health and related intervention programs as per the president’s mental health recommendations to the National Alliance on Mental Illness which include: Early identification and intervention inclusive of training for teachers, school resource personnel, improvement of mental health and substance abuse treatment for adolescents and young adults, thousands more mental health professionals to serve youth, and a nationwide effort to improve the general public’s understanding of mental illness and the importance of effective treatment (NAMI.org, 2013).

Some gun advocates argue that the government wants to take away all of our guns so it can overpower its own people. This is a perplexing argument because it implies an overwhelming distrust of our own elected leaders, leading one to question why people who believe this would want to live in a country where a fascist police state is already in the planning. Another point many gun enthusiasts overlook is that many weapons are already banned, and nobody in the history of the U.S. in a position of legislative power has ever proposed completely doing away with the Second Amendment. We are not allowed to own fully automatic guns, rifles with bayonets, sawed-off shotguns, pistol grip shotguns, rocket launchers, mortar cannons, nun chucks, or throwing stars. (Interesting ironic side note: It is apparently legal to own a flamethrower because the Bureau of Alcohol, Tobacco, and Firearms has determined flamethrowers are not firearms.)

Has being deprived of these things brought about a complete government takeover? No, it has not. It is too bad that our education system does not require all students to study critical thinking, because if it did, more people would recognize and avoid the straw man argument (arguing against a claim that is not made) and the slippery slope fallacy (if this happens, then that is inevitable.)

The other often-repeated argument is that we need semiautomatic rifles to protect us from a governmental takeover. True, when the Second Amendment was written in the 18th century, its purpose was to allow the citizens to arm themselves to fend off any potential governmental tyranny. You probably could have done that back in the days when the only rifle available was the muzzle-loaded musket and the U.S. government did not have a standing army, but not today. Anyone who believes they can hold off the U.S. military in their Home Depot-fortified bunker is just plain delusional. Should there ever be a government takeover and we are plunged into a hellish police state, your little Ready Mix cement hole will be reduced to gravel in seconds by a fighter jet or a drone flying so high you cannot even see it. Good luck. You might as well shoot at the moon with a BB gun.

Then there is the way-too-popular slogan: “Guns don’t kill people; people kill people.” This catchy phrase sounds good to anyone who does not understand that you cannot remove half an equation and have it remain valid. It’s like saying one plus two does not equal three; one equals three. Yes, a gun is inert without an operator, but the weapon’s primary purpose is to kill. Someone bent on a murder spree with an assault rifle can mow down dozens more first graders, grandmas, and girlfriends than they can with a standard revolver or hunting rifle. When Jared Loughner murdered six people and wounded thirteen others during his attempt to assassinate Rep Gabrielle Giffords in 2011, he was stopped when he had to reload his weapon. If Loughner was only able to get a ten round magazine, the damage he inflicted could have been greatly reduced.

But criminals will not follow laws, so we should not make any new gun control laws. Again, this line of logic defeats itself: Should we then only pass laws that criminals will follow?

We live in a world where even the Dalai Lama, the revered Buddhist leader and living Buddha, a man devoted to the concept of Ahimsa (harmlessness), has armed bodyguards. Even kittens have claws because there comes a time when the harmless must resort to self-defense. It’s simply unrealistic to have armed security in every school in the nation, but maybe we should consider having selected school staff have guns available in their vehicles in case of an emergency. At least it would be better than being completely defenseless. While it is true that we must not use emotion to create legislation, it is also true that righteous indignation about the abominable slaughter of innocent people should spur us to examine the laws that exist and amend them however necessary.

Despite all the differences of opinion on the matter, at least we all agree on this: The general public deserves to live as freely and safely as possible and it is better for all of us when the good guys have the weapons and the bad guys do not.

Note: Space did not allow me to address the Sandy Hook shooting deniers and conspiracy theorists. In short, allow me to say that it is truly amazing how easy it is to confuse and mislead otherwise intelligent people.