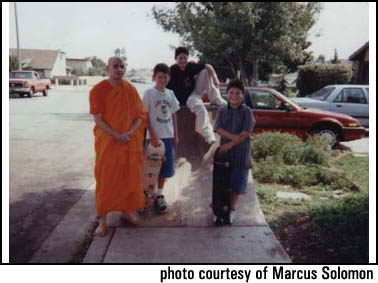 Thunder exploded all around as I ran excitedly through the warm pouring rain in the darkness of the Northern Thailand jungle. Feeling a strange combination of fear, excitement, wonder, and relief, I ran deeper into the darkness. Was that Buddhist monk really meditating a few inches off the ground? Why did the floor look like outer space? Running deeper and deeper into void, I could smell the mossy scent of the giant ferns and the twisted vines that hung down like tangled spider webs from the absolutely dark canopy of virgin rainforest high above. Completely soaked, I plodded along a muddy path that was swirling and churning with rivulets of hot rainwater that looked strangely like human veins when briefly illuminated by the irregular strobe of lightning flashes from the invisible sky. Everything was alive and I could feel everything looking at me; countless unseen eyes from the past, present, and future. Then an explosion! A lightning bolt hit somewhere close to my right. It was near enough to feel the heat and the thunder crash was loud and painful enough to knock me down.

I fell as much as I stumbled to my hands and knees into the throbbing hot mud. The white-blue flash remained for a moment, and I watched as the blue and white phosphene image of the jungle slowly melted and faded back into darkness. I dropped my head forward and could taste the salt of my own body on my lips. The ocean is salt. I am salt. The ocean is water. I am water. The world is alive. I am alive. Squeezing two big fistfuls of living earth I said aloud to myself, “Bitchin’!”

What is Punklightenment? Specifically speaking, it is a term I created to give a name to the higher realization that comes directly from the punk rock subculture. Generally speaking, Punklightenment is the same sense of expanded consciousness that comes from any unexpected or odd source. There is no guarantee that involvement in the punk rock subculture will lead to any sort of enlightened experience, but it happens, and it happens often. My explosive and exciting experience ten years ago in the remote Thailand jungle was not a Punklightenment experience, because it is not unusual to encounter strange things and expanded consciousness when hanging around mystical Buddhist monks in isolated jungle temples. It was just plain ol’ Enlightenment. My first mind-expanding experience that emanated from the punk world took place sometime around 1980 at the Paramount Skatepark here in Southern California.

“What kind of music is this?” I asked aloud without expecting anyone to reply. “It’s punk rock and it sucks!” My friend Alan answered. The skatepark P.A. system was playing KROQ and, back then, it was definitely worth listening to. Way back before KROQ became a corporate-controlled money machine churning out trend-driven, falsely labeled “alternative” music, you could hear Sex Pistols, Black Flag, Blondie, The B-52’s, The Jam, Dead Kennedys, and the like … ALL DAY LONG. It was unlike anything I had ever heard before in my entire life. The sounds coming through the air and into my mind were liberating and intriguing. The true spirit of punk rock—and related subgenres—were coming through loud and clear. To a fifteen-year-old skinny kid with an abusive alcoholic stepfather growing up in gang-infested chololand, the exhilarating and the new punk sound was a welcome knock on the door of my consciousness. It opened up an entire new world that reintroduced me to myself and helped me regain my temporarily assassinated self-esteem.

I remember this kid flying on his board out of one of the pools and he rolled right up to me. He looked like a Martian. He had on a pair of crazy green and yellow plaid shorts and high-top Converse shoes that were sloppily spray-painted fluorescent green and red. He was wearing a button-up shirt with big, vertical red and white stripes. On his buzz-cut noggin was a purple Pro-Tec helmet covered with various skate and punk rock stickers. I could feel the puzzled expression on my face as I looked at the purple plastic Goofy the dog sunglasses on his face as he said, “Hi!” He kept on rolling, and he lifted the front of his board and smoothly grinded back into the vertical bowl, across the bottom and up into the first invert I had ever seen. The whole scene seemed like magic. It was magic. This friendly weirdo kid dove into an empty pool, and flew up into a one-armed handstand on the other side. He stalled it for a second or two and effortlessly dropped back into the bowl. Again, he popped out right next to me, but this time he landed on his feet … still smiling. “How do you do that?” I asked with open wonder. The magical flying punk rocker looked down and thought for a moment. He raised his head again and shrugged, “I really don’t know how I do that.” I told him I was going to do that someday and he said, “Yeah … you will.”

That was the day that Punklightenment first washed over me and it was truly liberating. For the first time in my life, I realized I did not have to conform to “normal” society’s standards. I already knew right from wrong, true from untrue, and beautiful from ugly. What I did not know was how to let go of conformist culture and the misguided idea that my self-esteem was somehow dependent on other people’s opinions. Punk rock and the skaters at the skatepark taught me how … just walk away and do your own thing. The rest of the world still existed, but I found a new one. Skateboarding and punk gigs soon became the guiding forces in my life. It gave me somewhere to vent my frustrations, to cultivate skill, and develop courage while having a hell of a lot of fun. Skateboarding taught me how to absorb pain in a positive way. It taught me how to take a bad slam and get back up so I could try again. Nobody picked on me anymore. I learned to defend myself when necessary and to walk away whenever I could. Fuck those people. Not in an angry, vengeful way, but just you know … forget those assholes who can’t see out of the tiny boxes they think is the whole world.

How about you? Do you remember the first time the punk rock world opened your eyes to something new? How many times has it happened since then? This never ends. Revelation is like the multiple layers of an onion. Keep peeling it back and you find more and more layers. Just close your eyes and let the music wash over you until it takes you to a place in your mind that is often called Nirvana. Skate down a hill in the dark so fast that it makes your eyes water and it seems like you are standing still while the Earth turns beneath your wheels. It all feels like flying. We are truly flying.

Thank you to Razorcake for allowing me to resurrect the Punklightenment column that previously ran in another magazine.