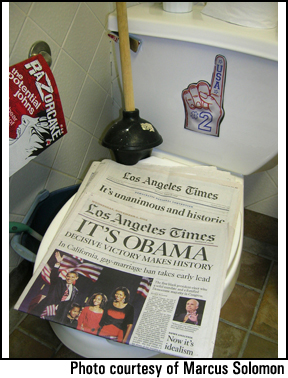 I woke up feeling energetic, enthusiastic, and strangely refreshed due to the recent election of Barack Obama—the first United States president with a discernable level of melanin in his complexion. With a spring in my stride, I stepped into a foul-smelling, slowly creeping, puddle of piss and shit. The toilet had backed up, and, of course, I did the stupidest thing one could possibly do in that situation... I flushed it. I just wanted it all to go away. That instantly made things worse. “No! No! No!” I could hear myself yelling as turd stew steadily spilled over the edge of the bowl, cascaded over my bare feet, and soaked into the fabric of my sweatpants around my ankles. While loudly shouting obscenities, I grabbed the heavy duty toilet plunger and gave a mighty shove downward. The rubber, suction cup end of the plunger had hardened over time, so instead of driving the incredibly putrid muck down the drain, it held firm and just about drove the hard, wooden handle through the palm of my hand. I desperately did this a few more times, hoping it would unblock the evil porcelain monster’s gullet, but all I did was repeatedly drive the fucking handle more painfully into my palm. I got another plunger with a soft suction cup and confidently pushed down. SPLASH! It did not work as intended and only made a bigger mess.

Remembering that I had recently had a mild stroke that paralyzed part of the right side of my face for a few days, I forced myself to calm down. This was no easy task when one has taken a quick shower with other people’s poop-saturated pee water. The last thing I wanted was to suddenly give myself a stress-induced aneurism and fall down dead into a puddle of liquid feces with a plunger in my hand. It’s funny now, but at the time, it was a nightmare, and I really could have killed myself with another stroke... I think. The key was to calm down. I had to think and deal with the situation without angry panic. My mom and fiancé tried to help by bringing rags and old newspapers to soak up some of the fetid muck. I finally found the sweet spot in the honey bucket and, with a satisfied belch, the commode monster finally swallowed. With a satisfied sense of accomplishment and relief, I noticed one of the newspapers on the floor had a photo of—at the time of this writing—still-presidunce George W. Bush. How appropriate! The man has truly made a horrible mess of things. I even chuckled a bit.

Then I realized and thought to myself, “Wow! I am kind of like our new president. I may not be a suave, handsome, powerful, former professor of Constitutional law headed for the White House, but I am eager to get started on this brand new day, so full of promise and possibility, but first, I have to deal with somebody’s else’s terrible mess.” It was a strange way to come to an epiphany, but valid nonetheless. As I went about the still-disgusting task of wiping up all the soppy, fecal remains, I kept seeing more parallels between my situation and that of president-elect Barrack Obama. The vast majority of this nation and most of the rest of the world wants nothing more than to flush Bush and all his cohorts down the drain... but it won’t be so easy. The Bush-Cheney co-presidency has firmly entrenched its crap into the deepest bowels of our government and removing those clogs will take more than a simple purging. It will take years... most likely decades to undo what those consciously corrupt, abysmally inept politicians have done to our nation, economy, and worldwide reputation. Even once the terrible mess is cleaned up, the stench of our soiled worldwide standing will remain. Who knows how long it will take to rebuild the many severed alliances we once had with other nations? I am glad the turds are being washed away, but it’s sadly evident also that ours is no longer the strongest, greatest nation on Earth. Junior and Co. thrashed the place, and they leave the smoldering shitpile to someone else.

For the past eight years, I have worn my battered American pride with a cringe.
GeorgeW.Bush’s consistent butchering of the English Language is downright embarrassing. He has proven to be a colossal failure, a belligerent boor, and a reviled, worldwide laughingstock. The list of his screw-ups, deliberate lying, illegal manipulations, and violations of The Constitution is far too long to list here.

I never thought I would see a United States president sit and continue to read a children’s book while the nation was under attack. I never thought that my country would invade another nation that did nothing to us. I never thought my country would torture people and hold them indefinitely without trials. I never thought my country would tap the phones of untold numbers of innocent Americans without legal warrant. I never thought my country would consider building concentration camps for American citizens accused of thought crimes. (In August of 2002, then U.S. Attorney General JohnAshcroft publicly proposed the creation of detention camps for U.S. citizens the Bush administration would deem enemy combatants. See: “Camps for Citizens; Ashcroft’s Hellish Vision”: http://www.commondreams.org/views02/0814-05.htm) I never thought the president would do absolutely nothing while my fellow Americans died on live television during the hurricane Katrina catastrophe. The president has the authority to Federalize the National Guard by decree—at a moment’s notice—but he chose to let them die, while he happily continued with his “working vacation,” going around giving speeches about dismantling Social Security and trying to rally more support for the Iraqi invasion. People were literally drowning while the president was giving a speech only one stoplight away—about two miles—from my tutoring center office. I almost drove over there so I could flip him off as he drove away, but I realized that would make no difference. Working with kids makes a difference, so I just kept working.

I believe that the Bush/Cheney co-presidency is more akin to a pirate ship than effective government. They came into office promising to renew and revitalize Washington and the nation, but did exactly the opposite. Once in power, they began looting the treasury by initiating a spending spree unmatched by former administrations, much of it directly into the pockets of war profiteers that supported the Bush/Cheney rise to power. In his book Conservatives Betrayed, author Richard Viguere, a conservative Republican credited with being one of the architects of the Reagan Revolution, points out that the Bush/Cheney administration has spent five times the amount as the Clinton presidency; all the while slashing public service programs. Take from the poor and give to the rich like never before.

I also believe that the Bush/Cheney pirate ship deliberately dismantled, deregulated, and thereby helped create the domestic financial crisis so they could further loot the treasury via government-funded bailouts to their campaign contributors and friends on Wall Street. It also looks like the big three automakers in Detroit will be rewarded for their own incompetence as well. The entire federal government has been essentially handed over to foreign banks (for the funding of the Iraq fiasco), and it has purchased all the bad debt created by free-for-all government deregulation.

It’s also become obvious to almost everyone that the whole invasion of Iraq had nothing to do with an impending threat to our nation. Former Bush press secretary ScottMcClellan writes in his book What Happened? Bush saw the Iraqi invasion as,“his opportunity to create a legacy of greatness”—something which Bush views as only obtainable by wartime presidents.” (http://www.swamppolitics.com/news/politics/blog/2008/05/bushs_culture_of_deception_spo.html)  It was a war of choice—there were no weapons of mass destruction—led by lying men who have never tasted battle, partially for the purpose of feeding the hungry ego of George W. Bush, but primarily for pouring trillions of dollars into the bank accounts of the war profiteers. The war-hungry man the White House wanted to play with his new toys—the largest military force the planet has ever seen—and while he was at it, why not kill two kids with one bullet and make an obscene amount of money in the process? So much has gone down the drain. Thank goodness the majority of this nation saw that (the formerly respectable) John McCain and his Joe the Plumber gimmick was not going to fix anything. And Sarah Palin? McCain’s Vice Presidential pick did not even know what the VP was supposed to do. On October 20, 2008, Palin said during a television interview for on KUSA, an NBC affiliate in Colorado, that the Vice President is “in charge of the Senate.” Wrong.

With a sigh of relief, I plopped the last of the filth into a garbage bag, wiped the floor clean, and climbed into the shower. It felt so good to be clean again. I thought again about the new day ahead of me and the renewed future for our beloved United States. Barrack Obama is not a miracle worker, or a messiah, but at least he can speak the English language properly, he knows what The Constitution is supposed to stand for, and I believe he truly cares for the well being of all Americans.

This is now our lotus moment. The Buddha chose the lotus blossom to represent Buddhism because it grows best in the dirtiest of water and comes out spotless; entirely clean. It will take much time and much effort from many people to restore the power and prestige of the United States, but it will be done. Besides, doesn’t our country have a tradition of having dark-skinned people clean up the white man’s mess? Flush it down Mr. Obama, but be very careful.