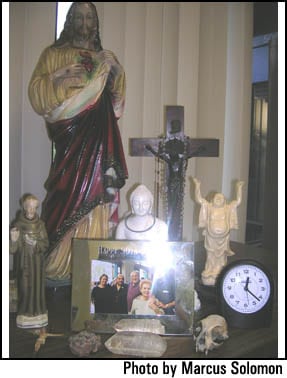 Two funerals in six days. My family and I were devastated. My two remaining grandparents died a few months ago, [See Punklightenment #4] and it temporarily killed my desire to write, go to gigs, and do much of anything. Also, I just found out an old friend of mine died last Friday, August 1, 2008. His name was RayUnderhill, a super-friendly professional skateboarder who rode for Powell Skateboards in the late ‘80s and early ‘90s. Suffering and death both suck, and there simply is no avoiding them. These are things we must all face. Most of us also have to endure the deaths of friends and loved ones while we wait our turn to die. One of the most important things I learned from studying Buddhism is that all sentient (self-aware) creatures have to suffer and die; it is normal. Another important thing Buddhism has taught me is that it is essential to have a proper perspective (right understanding) in order to effectively cope. Punk rock also plays an essential role in helping me to deal with all the negative, painful things in life. There is something magical about how music affects and modifies emotions, enables us to realize others are feeling and thinking the same way, and punk rock is the intense, forceful, and magical language that loudly shouts most clearly to my heart and mind. Sometimes I prefer the soothing emptiness of silence, and other times I need the roaring catharsis of livid punk noise.

Pain is unavoidable. Suffering is part of living and try as you might, you cannot outrun or hide from it. We do our children a disservice when we lie to them with stories about fantasies that end, “…and they lived happily ever after.” Nobody lives happily ever after. Happiness is a matter of degree and the best anyone can ever do it to have the good outweigh the bad. I often ask Buddhist monks, “Are you happy?” The overwhelming majority answer, “Most of the time.” I am firmly convinced this is the best anyone can do. Anyone that is happy all the time is either a liar or a delusional idiot.

I am reminded of a joke I made about skateboarding: “Why are women like skateboards? Because they are fun to ride and you WILL get hurt.” But you can easily insert “life” in place of “women.” Everyone, and every being…princes and paupers, politicians and proletariats, puppies and porcupines, are subject to age, illness, death, and a whole lot of excruciating experiences in between. This is where proper perspective helps a lot. It takes some effort, but when life beats the hell out of you, try to put it all into a larger framework.

When my grandfather Daniel Solomon died, I realized that living 94 years was an amazingly long ride. He lived a wonderful life and did so many great and interesting things. He was a professional boxer in the early ‘30s who almost made it to the Olympics. He was a professional dancer who danced with the famous Barbara Stanwyck in a movie called The Bride Walks Out. I have been told that my grandparents were such phenomenal dancers that people would clear the floor just to watch them float together. My grandfather was also quite a daredevil who performed a lot of death-defying stunts. I guess that’s where I got my own tendency to flirt with danger. My grandparents were married for 67 years and they were always together, so it was no surprise to see my grandmother, Henrietta Solomon, follow him into death only seven days later. My grandmother was the quintessential, devoted wife and mother, but she was nobody’s lackey or fool. During her 87 year life-span, she was a nurse’s assistant and a beautician. But mainly, she was the quiet and observant matriarch that reveled in maintaining a clean and orderly house while dispensing succinct wisdom whenever necessary. One of my favorite memories is of a time when I was about 11. We were listening to a bunch of our extended family go on and on about how people should not take their kids to the zoo because, “…those animals are such DIRTY things!” I asked grandma why anybody would say such a dumb thing and she said with a smile completely devoid of insult, “Because they are kind of stupid.” We both laughed and laughed. I remember also how she told me on the phone what to do while my maternal grandmother died. “She can hear you Marc! Go to her and keep talking! Hold her hand, tell her how much you love her and keep talking!” I thought of this the last time I spoke to Grandma Solomon while she was dying and I heard her voice in my head: “I am just going to sleep now. I will see you again.”

“Perspective! I must have perspective! They lived a long time and this was just the painful ending to a beautiful love story!” I told myself over and over again. What wonderful, lives they both lived! There are countless good memories to think about, but even so, we cried and cried because that is normal too. “I gotta remember what that monk said, that when an emotion is felt, its job is done, so don’t hang on to any of them.” There is much comfort in seeing suffering come to an end. The suffering was over. The worrying was over. There is no pain in death. The dead do not suffer--the living do. 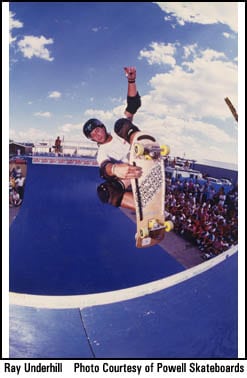 Ray Underhill suffered too. Brain cancer was undoubtedly a horrible experience, and despite his incredibly valiant effort to beat it, indescribable pain and death came and took him away much too early. I had not seen him in years, but Ray was one of those people who are so likeable and inspiring that it seemed like he was always….there. I watched him succeed as a professional skateboarder—with his own model—and then he went on to be a success in the skate industry and was the Webmaster for Tony Hawk’s Internet endeavors. Some guy I didn’t even know at the new Upland Skatepark told me one day after it happened that Ray died, and I just sat down and covered my face. Even though I had not seen him in over ten years, his passing deeply saddened me. It is always a terrible thing when someone dies young—like my friend Kenny who died at the age of 24 from bone cancer--but again, there is no pain in death, suffering comes to an end, and there are usually good memories that can help soothe the pain…but it takes effort. Depression is a whirlpool and it will suck you down unless you make the effort to heal, cope, and continue. When you slam, lay there only long enough to gather the strength to get up again…unless it is absolutely impossible to continue. Eventually, the time will come when it is our turn to stay down and return from whence we came.

Having been a skateboarder for over 30 years, I often think about all of this in skater’s terms. I see this life as a big skatepark full of obstacles and deep pits. The obstacles become challenges to joyfully conquer and the pits become vertical pools of high-speed excitement. Inevitably, we all wobble or hang-up and take a hard slam. We lie there writhing in pain as we swear never to do that again. But we get up and do it again. Sometimes we are genuinely injured and we need the help of friends to get back up while we take a long time to recover. Sometimes we are merely scraped up a bit and it is much easier to get back on the board. Either way, it is essential to get back up and keep rolling…to keep living and that punk rock soundtrack in the background really sets the mood. Bearing that in mind, I am really looking forward to the gig this weekend with Shattered Faith, The Gears, and the reunion of Sin 34 (after 24 years!) Yeah, its time to keep on pushing forward…