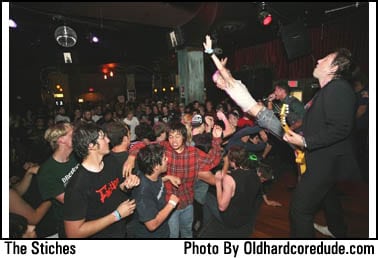 Punklightenment #3: Life Is the Pits

The slampit is a model of human existence. We are all running around, trying to get somewhere, but in actuality, we inevitably come back to the same place while so many others are spinning in the same circles and bouncing off each other in the mad rush to get nowhere. A Razorcake.org reader named Ricardo sent me an E-mail in which he pointed out this metaphor of the slampit. He wrote: “I connected the pit to life itself. We all dance through life, most of us try not to hit each other too much, but when someone eventually finds themselves down, everyone tries to help them back up.” “Oh really?” I thought to myself as I read Ricardo’s message. “Everyone helps someone to get back up?” But the learning curve was also part of his realization. He continued: “…it wasn’t long before I realized not everyone in the world was like that. There are a few that wanna kick people when they are down. There are even more that don’t even notice when the guy next to him drops. It’s really sad that you see as much—if not more—compassion in a mosh pit than you do in day to day life.”

This got me thinking. I had never thought of the gig’s slampit as being anything representative other than mindless fun and/or stupidity. I have always taken a dim view of the circle pit, the way it always goes in a counter-clockwise circle usually reminded me that it was one of the conformist ironies of our punk rock subculture. To me, it just seemed dumb to play an older version of Follow the Leader while always going in the same direction. Sure, the pit is fun and a great way to vent frustrations and such, but whatever happened to spazzed-out pogoing, and just plain ol’ non-directional slamming? And yet, this new angle on the pit has stayed with me. I have been thinking about it a lot and it makes perfect sense. In the beginning, there was formless chaos. Then, form spiraled out of the chaos, causing everything to move in distinct directions according to each entity’s energy and physical nature. There is still chaos within the form and the form still manifests from the underlying power of chaos.

It is the microcosm and the macrocosm. This means the model of the small (the microcosm), is the model of the large (the macrocosm). For example, consider the model of the atom. It has spherical centers (protons and neutrons), with outlying, smaller, orbiting spheres (electrons). Now look our own galaxy and solar system. They also have large, spherical things in the center, and outlying, smaller, orbiting spheres. Modern science has only recently discovered this repeating pattern of existence and matter, but the sages and gurus of ancient times knew it all along. It is in the Hindu Vedas, the sacred teachings of Jainism, Native American religion, the teachings of the Buddha, and the list goes on and on. It is truly amazing to look at something as mundane as a punk rock slampit and realize it is a model of infinity…and you don’t necessarily have to be on LSD to grasp that reality. I have a National Geographic poster of the Milky Way on the wall to my immediate right, and now, it always reminds me of a slampit... and it makes me think.

It is often said that life is a circle. We enter this world as infants, small, helpless, and dependent on others for survival. We spin through our lives doing this and that, and if you are lucky to live long enough, you just might find yourself old, frail, and once again dependent on others for survival. In any event, everyone gets born, and everyone dies. The spinning vortex of the life-pit has many variables within its structure, and the possibilities within that reality are endless.

I have recently been applying this fun, new metaphor to my own life, and it has really helped me to understand a few things. For example, some people on a punk rock message board recently accused me of being self-congratulatory and pompous for writing about the sick, homeless woman my family and I took into our home. Yeah, those are the ones who will hit you while they run by as you lift somebody off the floor. Some of them may pick up others on a regular basis, but they still get a kick out of giving somebody else an unexpected punch. Most people who help others don’t do that, but some do. Those are the ones who show compassion to their own crowd, and then go out and kick somebody’s ass. Nobody is all good or all bad. The life-pit is full of angels, monsters, and mutants of every sort.

How about those stage divers? I remember doing a lot of that before my skateboard-ruined knees and the steady march of time put a stop to it. It was so much fun to launch myself into empty space propelled by the explosive-nova energy of nuclear punk rock. Falling, twisting, and eventually landing on the heads and/or into the arms of the churning crowd; I was a meteor plunging onto the surface of planet punk. It was an exercise of trust and a bit of bravery…and of course, a bit of stupidity too. Stage divers don’t always get caught, and the ugly reality of diving into or near the pit is that oftentimes, one finds themselves painfully slamming to the floor. Whenever you take a chance, there might be people to catch you if you fall, but don’t count on it.

Remember that woman I mentioned earlier? The same one that I wrote about in the previous Punklightenment article entitled “Stray Humans”? She was one of those stage divers that just keeps going back up there and jumping off over and over again. Some kooks expect to be caught every single time and they repay your kindness by kicking you in the face. These people deserved to be dropped right on their heads. Case in point, I wrote about this woman who was near death. She was terminally ill and had nowhere to go, so my family and I took her into our home and did everything we could to help. Little did I know that we had been set-up. She monitored my catching ability by testing me before making her final plunge. Having seen that I would come running whenever she needed something, she knew I would make the big save if she launched toward the sidewalk. She was truly appreciative at first, but as time progressed, and her malnourished body regained strength, we learned the truth.

She was a prescription drug addict and her renewed energy and safe living situation enabled her to get back to the business of abusing her medications. She had morphine, oxycodine, various tranquilizers, muscle relaxers, and more. She would take a whole bunch of pills and get fucked-up and stagger around the house. She turned on the stove one night while in one of her stupors and luckily, I had to take a piss in the middle of the night and I put out the fire. She overdosed and almost died. I found out later that she had overdosed so many times over her lifetime that her family lost count. That is why they had to cut her loose…and she had a real mean streak. We were the latest in a long line of nice people who were taken advantage of by this clever and insidious addict. She wasn’t terminal, she was just dying because dope was more important than food; now she had both.

The social workers put us in charge of her medications in order to prevent the abuse. No luck. What started out as a rescue mission of compassion turned into a tense game of poker with opiates as the chips. She would hide the pills in her arthritis-twisted hands or in her mouth, saving them for later so she could take a dangerously large quantity. After three overdoses, we got tired of having the paramedics, fire department, and police at the house once a month to pick up this barely alive junkie. Sure, she was a human being with a problem, but she was also a liar, a user, and her outlook on humanity in general was horrible. I went to the hospital and told her, “I told you if you did this again, you could not come back.” She then accused me of being a thief and said that I was always mean to her. I could not believe it, but there she was, vowing to have revenge. She told her social workers and nurses that I had stolen her money and that I was neglectful and abusive; she wanted me arrested. Thanks a lot Barbara, I caught you and then you kicked me in the face, not just to bruise me, but you tried to do serious damage. She got dropped. Well, we did a hand-off to her granddaughter, and gave her the warning, “When you keep picking this one up off the floor, she will eventually pull a knife.”

“I know.” Was the granddaughter’s reply.

But again, nobody is all good or all bad. Barbara loved horses, raccoons, and M*A*S*H reruns. We had a few good laughs, some deep conversations, and shed a few tears. But like the drunken jock mindlessly hurting others as he blindly swings his fists in the pit, Barb was under the influence, and that addiction eclipsed all the good. It’s not easy to cut someone loose, but like I was taught in life-saving class, “If the victim threatens to pull you under, let them go.”

Right now, I am sitting in the eye of the life-pit. So much is going on around me, but this place is calm for the moment. Outside, the planet is on fire, children are playing, cars go by, Bush is still a war-mongering asshole liar, but none of it affects me for a brief period of time. The hurricane is everywhere but the center. I am next to those who stand in the middle of the pit and watch everything go by. They remind me of people who stand around and do nothing while others do everything. And then there are the ones who do not participate at all, they stand apprehensively on the edge of the pit, all the while kicking and punching as you dance past. They are the shit-talkers who are afraid to get in the mix, too cowardly to attack you face-to-face, but they hit from behind and disappear into the shadows. How many other comparisons can you make? I think the possibilities are endless.

Write to Marcus at: http://www.nothingzine.com/