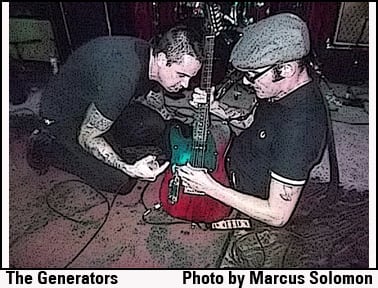 Punk rock grandmas and grandpas! I saw quite a few of them last night at the rip-roaring Gears, Generators, and The Billy Bones show last night at Alex’s Bar in Long Beach (Punk Rock Social Live! www.punkrocksocial.com). During the Generators’ set, I noticed a rather matronly woman right up front smiling and nodding to the abrasive rhythms. She had all-white hair, a modest short-sleeve black dress, sensible shoes, and a black handbag that looked exactly like the one my grandma used to have. Intrigued, I looked closer and saw the assorted tattoos that snaked up and down both arms, the facial piercings, and the Black Flag button on the right lapel of her grandma dress. “Wow! There are a lot of old people here” I thought to myself as I scanned the room. Then I suddenly realized, “Hey! I am old too! Those old people are my generation and I am soon going to be forty-eight-years-old.” I am not much into the bar scene, I rarely drink alcohol, I have a lot of young friends, so the majority of the shows I go to tend to be all-ages events. Seeing all those young faces at the punk shows imprinted on my mind—and I have a tendency to think of myself as a teenager anyway—until I look in the mirror and see a face that looks more like my father’s than what I imagine to be my own. Time goes so fast.

A few weeks earlier, after an exhilarating show by TSOL and The Junk at The Vault in Temecula, I was talking to a younger fellow fan in the parking lot. It was dark and he apparently did not see how old I was when he commented, “Man, it really annoys me to see so many old people at the shows.” I felt insulted, and a bit self-conscious about my age and appearance. I bristled, took a moment before speaking, and took one step back into the light so he could see how old I was. I smiled broadly and said, “Why does it bother you to see the same people whose generation created this scene still enjoying it? Did you notice the people in TSOL are not teenagers? Man, the music is just as good now as it was then, and you seem to be the latecomer to my scene.”

The young man with the black leather jacket emblazoned with the names of various seminal bands such as Adolescents, Black Flag, Crass, and the like, was wide-eyed for a moment, smiled, and apologized. “I’m sorry, man. I did not mean to be rude, but I’m just not used to seeing a bunch of older people at the shows.” Obviously, he frequented the all-ages events too. “Me neither.” Was my succinct reply and then I ruminated silently for a moment on how I am only two years away from being fifty years old. Sighing loudly, I imparted him with some sage advice. “Enjoy your youth because it goes so fast, and if you are lucky, you will one day realize you are old, too. The music will still be great, but by that time, all these great bands will be long gone… or will they?”

Deborah Harry is sixty-six years old, guitarist Chris Stein is sixty-one, but Blondie just released its ninth studio album (Panic of Girls) and the band is planning another world tour to promote it. I listened to one track, called “What I Heard,” and even though Ms. Harry’s chill-inspiring voice now has a distinctive hint of grandma-ness in it, she still has that inner spark that transcends time and age. Blondie’s Eat to the Beat was the first record I ever bought as a teenager and I still remember putting on the headphones and hearing Harry’s sexy siren voice magically take me to another place. I still have it and still know that place.

Motörhead’s Lemmy Kilmister has also traveled around the sun sixty-six times and it is doubtful that rocket-fueled, grit-metal legend will ever call it quits. Then there is The Rolling Stones, those guys must be two hundred years old by now, and there is current speculation that the band may tour in 2012 to mark its fiftieth year of existence. I would not be surprised if someday in the future they pushed Ozzy in a wheelchair out onto the stage for another dose of “Iron Man,” “Sabbath, Bloody Sabbath,” and all the rest. Certainly, we will lose a few more of our own punk rock legends and favorites as time marches on, but it also seems likely that those who survive will continue to belt out the counter-culture anthems that were a soundtrack to our youth. Those same songs have also become the soundtrack to the lives of the newbies, and the same fire that inspired our generation to throw ourselves recklessly off the stage onto the seething, sweaty heads of fellow concert-goers is still going strong.

At that recent TSOL show, I occasionally took the time to listen to the crowd’s chorus. All those kids, loudly singing along to each and every word, and pumping their fists in-time to the music that was written before they were even born. It was another night in the punk rock time machine. They didn’t just know the standards like “Code Blue,” “Dance with Me,” and “Abolish Government.” A lot of them even knew the more obscure songs. I watched and listened to one young fan of about seventeen correctly belting out each and every lyric to “Wash Away.” The youngsters also knew “Flowers by the Door.”

Always at the front of every show, I was taking quite a beating from the kids shoving me gut-first into the horizontal metal poles of the stage barricade. It was like getting punched in the stomach every few minutes. The teenage kid next to me kept inadvertently hitting me upside the head as he wildly swung his arms. He was entirely drenched in sweat and smelled faintly of vomit and strongly of chicken soup. His slightly-putrid odor, combined with the steady barrage to my midsection, made me feel sick. I turned to give him an angry shove in the opposite direction when he looked me directly in the eyes, put his stinky arm around my shoulder, and kept on singing. It instantly changed my mood from annoyed and angry to elation. This sounds strange, but I had the feeling that my body was disappearing and my spirit was being absorbed by all the young people happily bouncing all around the room. Objectively speaking, that is exactly what is happening. We older ones are crumbling with age to the same soundtrack of our salad days while those who still have time on their side absorb our energy through osmosis.

There is a funny picture circulating on the internet of Ian MacKaye and Henry Rollins with the caption: “Punk’s not dead (it just goes to bed at a more decent hour)” When I saw it, I laughed and then looked at how both punk icons have aged. Both Ian and Henry have gone grey, are visibly balding, and the facial wrinkles are visibly evident. But one thing had not changed: the intensity of their expressions. The body ages and returns to the dust, but the punk rock spirit does not. It stays exactly the same throughout time and comes to life in full force every time the band plugs in and turns the amps to eleven. It waits patiently in the CD, digital file, or in the vinyl recording and loudly explodes to life when somebody pushes the “play” button. It is still created live by the adept and underappreciated musicians and vocalists of the underground. It is absorbed by punk rock grandmas and grandpas who then imbue it to the younger ones who are conscious and fed-up enough to understand that pop culture and top-charting music is prepackaged, shallow, corporate bullshit.

Time goes by so quickly and now Razorcake is ten years old. Happy birthday, spawn of Todd Taylor. To you, and all those who make this magazine possible, and to everyone who reads this it, I dedicate one of my favorite memories. Sometime in the late ‘80s, I went to pick up a female friend who was going with me to a gig. I could not find her house, so I slowly drove along the neatly manicured suburban Long Beach side street looking for some sign of punk presence. Then I heard Black Flag coming from somewhere nearby. Turning my head to the left, I saw a boy, a toddler of about three or four years old with short blue hair standing in a driveway. In his hand was a Fisher Price tape player loudly screaming, “Gimme gimme gimme! / Gimme some more / Gimme gimme gimme / Don’t ask what for!” I stopped and asked if his mom was home. The boy had a wicked grin on his face and nodded yes. The torch was passed long ago… keep it going.