The Anarchy Library is fast becoming one of my favorite spots to see a show/get snowplowed. The sound system is way better than it used to be, they’ve got ridiculous drink specials, and they’re booking better shows with greater frequency. They even put in a stage, which means those days of dodging guitar necks and inadvertently becoming part of the show on your way to the pisser are over. Their website says the LA Times named them the best punk rock club in LA, which is hard to argue with since it’s not like they’re in competition with anyone outside of North Orange County, I mean Long Beach.

Anyway, a big reason for the Anarchy Library’s resurgences is Punk Rock Social – Live!, a semi-regular event run by Sean Rowley and Julia Coyote. They book Saturday-night shows with local bands like Dr. Know, the Skulls and Mad Parade and then every other month they’ll host a weekly show on a weeknight. I checked it out in April, drank some fifty-cent well drinks and saw some good gigs by bands I’d never heard of before, like So Unloved, a mostly girl band that just moved here from San Antonio and features Texas Terri’s niece on guitar. (She had on a wifebeater that read “Don’t fuck with me, I’m from Texas” but unlike her aunt, kept her clothes on.)

The Saturday-night show I went to featured The Skulls, Firecracker 500, Bobot Adrenaline, Blockage, and the Quirks. The Skulls sounded a lot better than they’ve sounded at some of the larger venues I’ve seen them at and Firecracker 500 was spookily reminiscent of the slowed-down Fullerton sound that may not knock your socks off when it’s right in your face but sounds so good in your ear. Blockage, the Punk Rock Social – Live! house band, put in a nice set of toe-tapping pop punk. 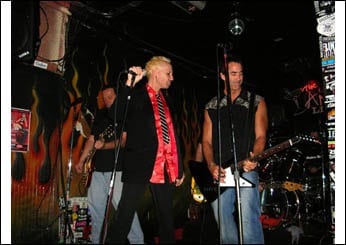 I’m impressed. No so much by any one thing: the old school bands, the rock-solid DJ between sets, the sick-ass drink specials, but the combo is pretty tight. Where else you gonna get 24-ounce cans of PBR while listening to the Dead Boys? In July, Punk Rock Social – Live! is going to be on Thursday night, which is $2 Newcastle night.

I don’t know about you, but I’m going to dust off my library card and do me some studying.

VARIOUS ARTISTS: Hours and Hours: A Tribute to Seaweed: CD