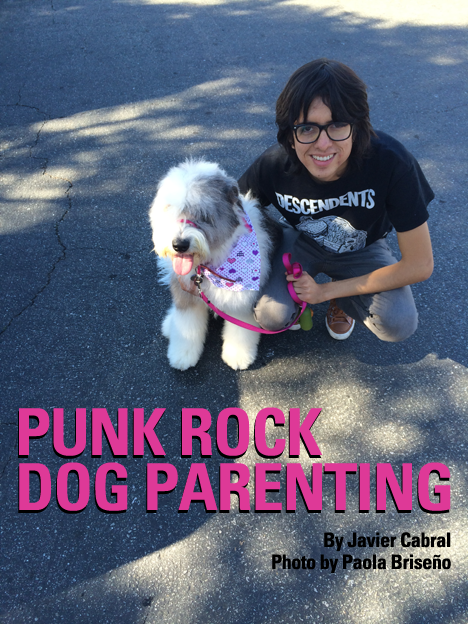 I was born and raised in East Los Angeles and my girlfriend was born and raised in Puerto Vallarta, Mexico. These two places may seem to be  exact opposites, but the two gorgeous cities share one startling statistic: they both have an abnormally high amount of teen pregnancies. Ride the camion (bus) around downtown Puerto Vallarta during the day or step into the daycare area at my old stomping grounds of Garfield High School and you’ll see what I’m talking about. Blame the laid-back beach life or the inner-city way of life with nothing to do. My girlfriend, Paola, and I said, “fuck a statistic" and moved out as soon as we could to follow our passions.

Her story is way cooler than mine. She was braver than me in life and moved out of Mexico at sixteen years old to Portland, Oregon—where she had no family or friends or knew any English—to finish her major in design research and culinary skills.

Me? I just tagged along. The truth is that it took her moving out to L.A. for work for me to finally move out and drop out of college to follow my passion for writing. Late as hell at twenty-three-years-old, too. Back then, we didn’t know much about life together, as we were crashing at my sister’s house until we found a place for ourselves. What we did know was that Paola wanted an Old English Sheepdog—a big puppy—to accompany our life as a family unit. Oh, and it had to be exclusively an OES since she used to know an Old English Sheepdog back in her pop punk Guadalajara, Mexico days and she fell in love with them then.

As a dude from East L.A. who had met the Mexican babe of his dreams by a total fluke, I instantly became fuckin’ Cesar Milan (that Dog Whisperer dude who has his own television show about training and understanding dogs), and would stop at nothing to find our little furry girl. It turns out, Old English Sheepdogs are a rare-ass, expensive breed. But after a couple of months of non-stop Craigslisting and patience, we found the  pup she’d always wanted. We got her for a modest re-homing fee from a city kennel employee who had a Saint Bernard at home and had rescued a dreadlocked Old English Sheepdog, in the middle of Palmdale, California.

It was love at first sight. We knew Fig, the “sheepbernard” with her black patch over one eye and her two-toned black and white eyebrows, was the dog for us. But then there was was that issue of finding a place that was dog friendly and affordable in an okay part of town. We quickly realized it would be a heinous bitch to find, especially for two, freelancing twenty-somethings in the rental housing dystopia that is Los Angeles. We eventually found a studio in AngelenoHeights for about $1,200 (no utilities included) that was somewhat cool with having dogs. By that point, we were desperate for anything with four walls and a kitchen so we said "fuck it" and signed the six-month lease.

It was pretty cool for a while until our landlord proved to be a mighty dick who gave us passive aggressive shit for having the dog. So on the 186th day exactly, we packed our bags and were ready to move the fuck out again. Only to have to—yet again—deal with the hassle of finding a dog-friendly place to live in.

After scouring Craigslist, rent.com, and driving around the blocks of Highland Park, Pasadena, Silver Lake, and Echo Park until we ran our tank empty and used up all of the battery in dated computers, we lost hope fast.

I was drinking coffee one day, getting ready to do some more searching, while Paola was napping, and I emailed this place. The listing clearly said “no dogs” but I still gave it a shot. What’s the worst that could happen? Them replying back “no”? What’s the best that could happen? We find a dog-friendly place to live happily ever after? The place was in Highland Park and it was in our price range, though the listing had been up for a couple of weeks—pretty rare on craigslist for a bona fide gem to live in. I asked extra nicely if “well trained, quiet dogs were allowed” (though, Fig was nothing but well trained or quiet).

When Paola woke up, she said she had tried calling to ask and that Noah, the other landlord, had told her no. The landlord then immediately emailed me back and said, “It’s fine.” I went to check it out on the same day. It was the tiny apartment of our dreams, with a huge backyard to let our dog free, a freaking hammock and even a perfect space to plant tomatoes. As if that wasn’t epic enough, the “Noah” that Paola had spoken too was Noah Levine, author of the punk rock buddhism philosophy book, Dharma Punx.

We couldn’t drive to sign the contract fast enough.

My awesome, alienated, dog-based way of life only got better because of Fig. I now take her to my local dog park where she wrestles with Matthew Vicknair’s (current bassist for Battalion Of Saints), ex-bassist for Yeastie Boys and Angry Samoans) miniature pinscher and  Kim Necroman’s and Patricia Day’s Resident Evil (in an ultra cool psychobilly way). This has led me to have some pretty awesome conversations about the scene with Matthew, whose bands I used to sport on my vest back in the day. Not to mention that I’m probably a healthier human being overall because of all the walks I take Fig on and the stress that Fig takes away after a few minutes of throwing a ball around with her after a long day of sitting on my ass, fulfilling anxiety-inducing deadlines.

So to our modern, urban, dog-unfriendly society, our parents and their old fashioned expectations, to all of our friends and anyone under thirty with kids already who keep pressuring us to have kids too, we say thanks, but no thanks. We’re happy with the kid-responsibility-free dream life Fig has led us to have. And we may even get Fig another sheepy sister soon.
Peace out.

Bio: Javier Cabral was born and raised in East Los Angeles (east of BoyleHeights, East L.A., west of City of Commerce, not SilverLake or EchoPark) and has been writing professionally about food, fast music, and Mexican culture since he was sixteen. He writes for the Los Angeles Times, Los Angeles Magazine, KCET, LA Weekly, and Saveur Magazine. Read his archives here.