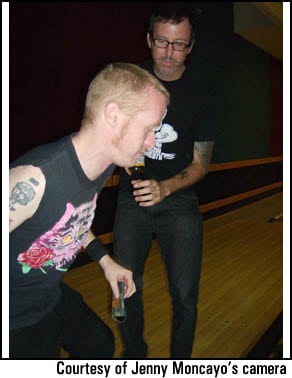 In a time now lost to the ages, man discovered the joy of rolling balls into stuff. After several thousand years, this skill has been honed into the art of ten-pin bowling. Sometime in the 20th century, rock’n’roll sprung from the primordial soup, and just when it was getting boring, punk grabbed it in a headlock and jumped right back into the primordial soup and has partied there ever since. Ten years ago, BYO Records looked in turn upon bowling and punk rock and said to each that it was good. And thusly, the two were joined and Punk Rock Bowling was born. 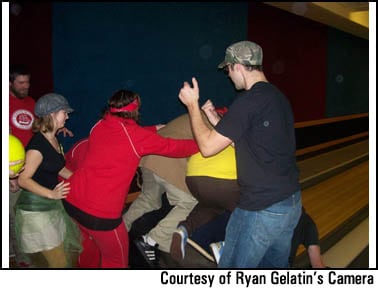 So it was into the 10th annual Punk Rock Bowling tournament that I found myself heading for in Las Vegas on the Friday morning before Martin Luther King Day. Driving across the desert in my trusty Scion Xb, I was psyched for the three-day weekend and the party that was gonna be going the whole time at Sam’s Town. I was a little less than psyched by the box full of bowling trophies in my passenger seat that was blocking my right rear-view mirror. Since I was helping out BYO for my room, I was in the interesting position of getting to go to Vegas for free. The problem was that I somehow didn’t convince anyone else to go and spend the long weekend in a free hotel room in Vegas with nothing to do put hang out with punkers. How that’s even possible I don’t know. It was going to be a long weekend. 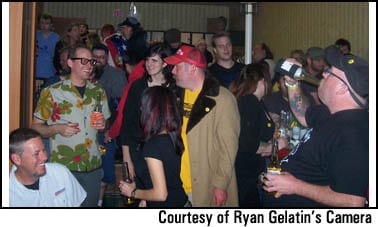 Once I got to Sam’s town and unloaded my car (with the help of the bell staff, people I would interact with more than anyone else while in Vegas) I had nothing much to do besides wander around for several hours until I had to help load up some shuttles heading to the kick-off show in Downtown Las Vegas. Walking around, I remembered why bowling was a weird place for me to be. First off, I don’t drink. In relation to punk rock as a whole, that’s something that’s always put me in a strange position because I don’t care if others do, but people tend to not warm up to the sober guy. Maybe it’s a result of asshole, militant, straight edge bros leaving behind a trail of burned bridges over the years, or maybe it goes even deeper to some sort of Viking-inspired human condition that measures a person’s worth by their ability to imbibe massive amounts of mead, but, whatever, it always sets me at a social disadvantage. Secondly, I realized that not being on a bowling team had the side effect of giving me a lot of time to catch up on reading Of Human Bondage in my room. At any rate, I’ve learned to adjust and try be the dependable guy that people eventually warm up to. It’s not a good method for picking up girls, though. I’m trying to work on that one…

When it was time to guide people to the shuttles, I had the pleasant surprise of finding out that punk profiling is totally easy to do. This made my job so easy. All I had to do was wait for girls that had at least two hair tones and some combination of skulls and band logos on their clothes. For the guys, I usually could wait for someone to come outside with tattoos and an unsteady wobble to their step, and be right on that this was one of the people who I needed to point to a shuttle. While I was in my element, guiding the flock of bowlers, the shuttle drivers were decidedly less than happy about the rowdy crowds. The best part of the whole thing? The angry shuttle driver who didn’t let anybody on her shuttle because of the previous group leaving drinks all over. This resulted in me getting onto a shuttle and helping clean it up. Between freezing from standing out in the wind and having spilled beer all over my hands, I was less than happy. Once I got to the show, though, it was a night of punk goodness straight out of 1983 with Youth Brigade, 7 Seconds, and The Adolescents. The night was topped off with a sandwich eaten at the venue in downtown, Jillian’s. Due to the paucity of people in the bar/dining room, I felt like I was in contemporary recreation of that Nighthawks painting. After spending a while at a Walgreen’s at two in the morning in a daze so I could load up on Mountain Dew, I finally crashed for the night. 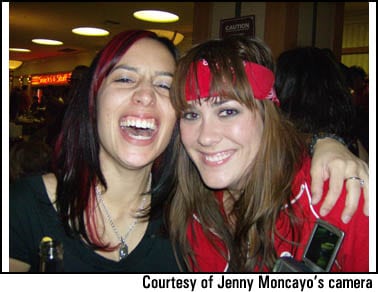 Saturday was a huge blur of reading about how love will screw you over punctuated with trips to the bowling lanes at Sam’s Town. Somewhere in there I recall watching a TV show where the host demonstrated the recipe for making panda cakes. By that, I mean the giant cakes of bamboo flour and other panda-approved ingredients that zoo keepers prepare in an industrial bakery to take care of pandas at a preserve somewhere in China. The minutia involved with panda upkeep isn’t something I’d ever stopped to think about before, yet I found it endlessly fascinating. Fast-forward to three AM. I find myself hanging out on a balcony after watching the premiere of the surprisingly engrossing BYO/Youth Brigade documentary Let Them Know. I can safely say that growing up in New Mexico, I never saw myself hanging out in the same vicinity as members of NOFX, 7 Seconds, The Bouncing Souls, Bad Religion, and the Swingin’ Utters. I go to bed soon after reeking of stale cigarettes. For being a non-smoker, this is something I find happens a whole lot to me.

Sunday is the home stretch. I spend the day wandering Sam’s Town, trying to find apparently non-existent single punkettes to introduce myself to, and eating junk food. As it’s the awards show that night, we overload my trusty Scion and it’s off to the Canyon Club to set up for the Manic Hispanic show that night. I get to work the door selling tickets and doing will call to the show. It’s fun because through the course of my three or four hours sitting at the door, I get to see a good 90% of the people who showed up to bowl. My friend Phil from Las Vegas also shows up after flaking on me two nights in a row. We have fun working the door, even when he runs his mouth off (constantly) and gets a few ugly looks from people. Phil’s granola revolutionary fashion sense definitely catches some eyes, including one person congratulating Phil on having the second best poncho that he’s ever seen. 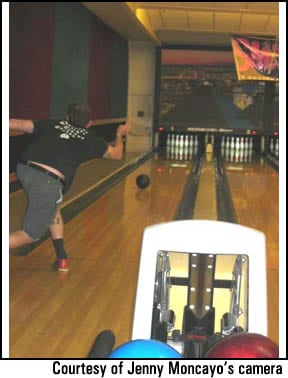 The best part of the night (besides the drunk chicks who think I’m a kick-ass doorman/BYO intern) has to be the sign just outside the club indicating the prisoner bus stop. My mind boggles as I try to figure out what kinda city just sends its prison populace out to a busy street corner in a tourist district to wait for a bus. Do the prisoners just wait there with their multi-colored lunchboxes with notes pinned on their sleeves to give the driver when he picks them up? The sign also apparently makes a taxi driver descend into madness as he pulls up next to me, laughing hysterically and pointing out the sign to me while I wait for a traffic light. Then he continues to laugh and point out the sign to me for fifteen or twenty of the longest seconds ever until I finally pull around a taxi in front of me that’s parked across two lanes. I can’t help but think I just was involved with some kind of omniscient beings allegorical representation of the fragility of the human condition or some equally deep thing. Night wraps ups with breakfast at 3 AM, back at Sam’s Town. The next day I’m on the road back home, older but none the wiser.