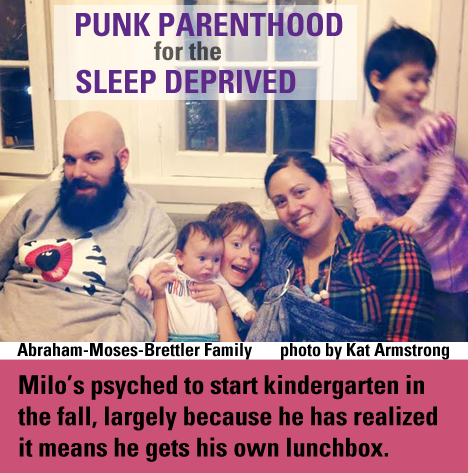 Punk Parenthood for the Sleep Deprived XI: Look for Hope in the Dark

My oldest son Milo is almost three and half, and in so many ways he is starting to seem like a “big kid.” He can tell you his address and what neighborhood and city he lives in. He can carry a plate of food from the counter to the table without spilling it. He’s psyched to start kindergarten in the fall, largely because he has realized it means he gets his own lunchbox. So, yeah, he’s not a baby anymore. That said, he retains some baby-like characteristics sort of uncommon among kids his age. The big one of these is his reliance on the mandatory trifecta of a soother, a security blanket, and a stuffed monkey whenever he needs to calm himself down. In contrast with the opinions of many friends and some shockingly mouthy strangers, I don’t really mind him having a soother in his mouth now and again. And as someone who kept a particularly beloved stuffed bear on my bed until the day I first moved in with a boyfriend, I am hard pressed to have any opinion about his connection to his monkey and blanket.

When I was putting Milo to bed a few nights ago he was chatting a bit between story books and he blurted out, “Some kids called me a baby.” Bedtime is often where revelations and details about his day at preschool come out, so I have learned to listen.

“Who called you a baby?” I asked. He looked surprised that I was concerned.

“The bad guys?” I asked. With a bit more prodding, I got what is maybe the full story. Some kids—not the kids he usually plays with—had been teasing him about needing his blanket, soother, and monkey during naptime. A teacher heard them, told them to quit it, and naptime progressed as normal.

The whole story made me feel, predictably, a bit smashy. Who were these tiny jackasses anyway? Fortunately, I’m a grown up with sound knowledge of child development, so those mom-based feelings passed pretty quickly. It helped that Milo was completely unconcerned with the whole event. He told me the story the same way he tells me what they ate for lunch or where they went on their neighborhood walk. When I asked him if the teasing made him feel bad, he looked at me mystified, and said again, “It was just the bad guys.”

Up until this exact conversation I’d been reluctant to let him watch TV shows or read books with evil characters in them. There are plenty of kids shows where everyone is just happy and hanging out. I didn’t think he needed to rush into an understanding that some people are assholes. Except it appears now that I was wrong. So it’s lucky he has learned to operate Netflix on his own and I’m not as strict with my TV monitoring as I could be. He watched some shows and read some stories where there were clear villains. And when some kids in his preschool class started acting like jerks he was able to process it all without much trouble. He saw himself as a good guy. Inevitably, there would be bad guys. Bad guys try to mess with good guys. Good guys usually win (at least in kids shows and stories they do), so no big deal.

It fit right into some thoughts that had been dogging me since I read Carrie Brownstein’s memoir Hunger Makes Me a Modern Girl, about her days recording and touring with Sleater-Kinney. I love Brownstein, and she’s a truly fantastic writer. But in addition to just loving her book, I found myself wanting there to be a second book, one about her bandmate Corin Tucker, who did all the same band-related stuff as Brownstein. However, she did it while parenting small children. Every time there was a mention of Tucker working her way through the band-versus-family situation, I craved more information.

There was one anecdote in particular that stood out. Brownstein writes about needing to push Tucker to work on darker, more upsetting things in their lyrics. She says, without being critical, that Tucker didn’t want to think about dark things. She was focused on her kids and didn’t want to spend mental energy thinking about all the ways the world was becoming more terrible. But when the band pushed her to delve into sadness and anger, they made great music.

That particular anecdote is referring to their work on the album The Woodswhich, while not my favorite, is easily the one that I’ve spent the most time thinking about and the one whose songs have become more interesting and complex with each listen. 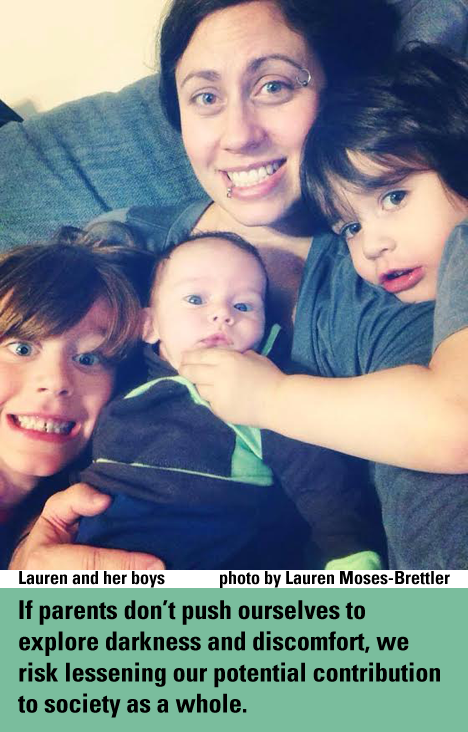 If parents don’t push ourselves to explore darkness and discomfort, we risk lessening our potential contribution to society as a whole. It may seem grand to say that about one record, but we all know what significant actions music has inspired. That Sleater-Kinney record inspired more acrobatic and critical thinking in me than a lot of other media I’ve consumed. It would have been a serious shame if it never got made.

And there lies one of the constant struggles of parenthood. How much darkness and sadness and knowledge of evil do we let into our lives? Into our children’s lives? How much is too much and how much is too little? Like most of parenting, it is impossible to know for certain and impossible to get right all the time. But like everything valuable and difficult, it’s important we think about it and important we try.

Lauren Moses-Brettler has been recommended as an interview subject for this column more than once—by three different people to be exact. And then I was talking to a friend’s mother at a holiday party and she started describing a woman she’d seen at a Chanukah party. “She had three kids, two older boys and a baby in a sling and she was so calm! Like it was nothing! And covered in tattoos!” My friend overheard her mother talking and leaned in to clarify. “That was Lauren Moses-Brettler,” she said. That was an easy tipping point. I figured if Lauren was being raved about by my friends in the punk community and by their mothers, she was someone I needed to interview. Plus, who wouldn’t be fascinated by a super calm mom of three with a bunch of tattoos?

Jennifer: Hi! Who are you?

Lauren: Hi there! I am Lauren Moses-Brettler, located in Toronto, Ontario, Canada. I’m partnered with a wonderful dude, Damian Abraham, who I met in the punk scene in the late ‘90s. We’ve been together almost thirteen years and he is an amazing co-parent.

These days I am a mom of three, currently spending all my “working” time keeping them alive. When working out of the house, I work in the community and social services. I’ve worked a lot with LGBTQ youth and doing anti-homophobia work with homeless youth, with those with mental health and/or substance use issues, and with sex workers.

Jennifer: Who are your kids?

Lauren: My eldest, Holden, is six and a half going on sixteen. He’s bright, sensitive, thoughtful, creative, and constantly moving. He’s super into baseball, robots, and art. He says he wants to be a baseball player and artist when he grows up, and he will sketch the other players. He’s also matured ten-fold since his newest baby brother was born and loves doting on and helping out with him.

My middle kid, Dorian, is three and a half and a little ray of sunshine. Well, as much as a three-year-old ever is, when the other half of the time they’re lying on the floor scream-crying about something. He’s rambunctious and also constantly moving, as well as hilarious and the sweetest, most loving little dude. He is also a total ham. He’s super into superheroes, princesses, baseball, and PAW Patrol these days.

The newest of the Moses-Brettler Abraham brood is Camden, who was born on September 28. He’s, well, a baby, in that he’s the cause of minimal sleep but also completely and utterly perfect and wonderful and completes our family.

Jennifer: How does your background in the punk/underground scene affect your parenting? 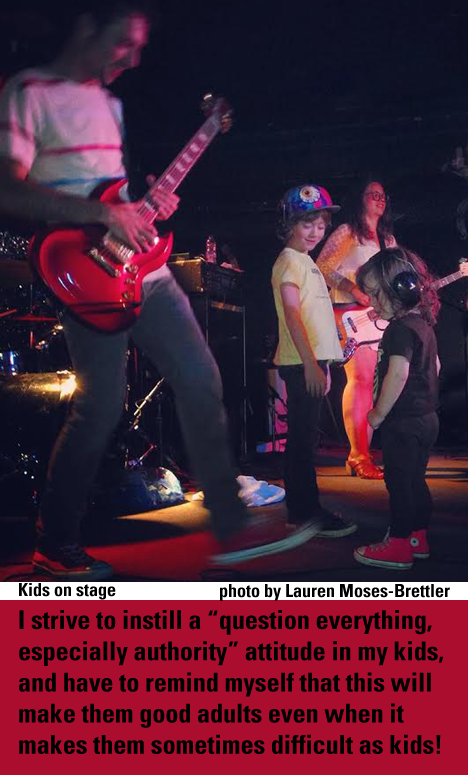 Lauren: Damian and I both grew up in the Toronto punk scene. I’d say it’s really where punk meets politics that has had an affect on my parenting. I strive to instill a “question everything, especially authority” attitude in my kids, and have to remind myself that this will make them good adults even when it makes them sometimes difficult as kids! That carries over pretty naturally from punk.

I also felt with punk came a creative outlook to be who I wanted to be, and not have to fit in with the mainstream. We’re constantly telling our kids that they can be anything or anyone they want to be, even if someone else doesn’t think it’s cool, or it’s different from what others are doing. We try and nourish their creativity while letting them express themselves in ways that makes sense for them.

Finally, the feeling of being part of a community, which came with punk for me, translates to my parenting in that I want my children to always have a community and many people—especially chosen family—they can count on. I also want them to always recognize the privileges they have as well as issues of equity and social justice, which punk helped solidify for me. We try and talk to them about issues of inequity, in kid-friendly language, as well as bring them with us to marches and rallies when we can.

Jennifer: What quality of yours do you most hope to pass on to your kids?

Lauren: I’d say I am a pretty compassionate person, in that I care deeply not only about other people but about injustices in this world. I strive to always listen to others, recognize where they’re coming from, and listen to their own experiences. I believe people experiencing oppression are the best narrators of their lives and experiences. I really hope my sons carry this with them and recognize that where they come from and who they are also means they need to speak up not just for—but in support and in ally-ship—of others.

Jennifer: What music are you most excited that your kids are into?

Lauren: Our kids like a lot of the music we listen to, and we’re often playing music at home or in the car. Holden’s current fave song is “Trash” by the New York Dolls and Dorian’s is “I Love Rock’n’roll” by Joan Jett. They also love Weezer’s blue album, Andrew WK, and of course their dad’s band, Fucked Up.

Unfortunately, despite my best efforts, they also tend to request songs like “What Does the Fox Say” and “Nae Nae,” which I have had to listen to more than any human should.

Jennifer: Describe the last time your kids made you laugh really hard.

Lauren: My kids crack me up on a daily basis! The potty humor is out of control in this house these days, which makes for some inappropriateness but usually hilarity, like song lyrics being changed to “poop poop bum.” But off the top of my head, the last thing that really made me laugh was the other day. Dorian is very articulate and descriptive. Damian was getting changed beside him and he said, “Daddy, your bum is very beautiful!” Ha, kids, man!