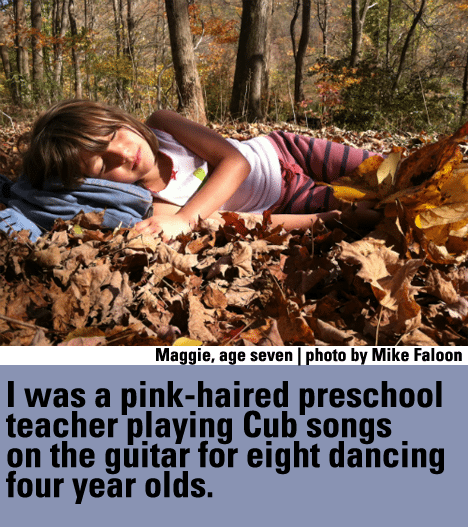 My son Milo started daycare in early October. He gradually began spending half days with my husband, David, who was still on parental leave* and half days at his caregiver Velvet’s cozy home in a downtown Ottawa neighborhood about twenty minutes from where we live. By December he’d gotten over any initial problems with being in daycare and was so content with his situation that he would throw himself into play the instant he arrived without a glance at whichever one of us was dropping him off.

Choosing a daycare was a surreal process for me. I studied Early Childhood Education and worked “on the floor” as a childcare provider for almost a decade before taking my current job as a daycare center inspector. I’d worked with hundreds of children and families who were all looking for quality care. Now the equation had flipped and I was that parent looking for care. It seemed like yesterday that I was a pink-haired preschool teacher playing Cub songs on the guitar for eight dancing four year olds. Now I was a frowning, anxiety-ridden parent looking for a place where her beloved baby could spend his days. It felt crazy.

One thing I was really concerned about, which may seem odd considering that my job is to enforce rules, was that Milo wouldn’t just learn how to behave himself and follow direction. I really want him to become a critical thinker—not someone who blindly strains against any sense of law and order, but someone who can make a well-considered argument for what he believes in. That may seem like a heavy request for a one year old, but I am willing to start small. I try to make sure that the rules he is asked to follow in our house are reasonable. Rules that keep him safe. Rules about not wrecking important things, like books and records. Rules that protect our pets from toddler-style smashing. I really wanted to find a child care provider who understood the subtle distinction between rules that make sense and rules for the sake of rules.

Luckily, while on leave, I became part of a loosely organized group of city moms who met for regular lunches and called ourselves the “Baby Party Alliance.” One friend from that group had just placed her daughter in Velvet’s daycare. She recommended it, so we called and arranged a visit. Velvet admitted to being mildly terrified when she found out what I did for a living. It probably didn’t help that my six colleagues and I spent an afternoon at the office coming up with a three-page list of questions to ask her. After she answered my initial questions, she handed us a binder full of information about her and her program. It was almost absurd how well she seemed to fit our requirements. She was a trained and registered Early Childhood Educator. She served only healthy vegetarian food. She made a point of saying that she wanted to promote an environment of equality where the children were treated the same regardless of gender or background.

In the back of the binder was a bundle of newspaper articles. She shifted nervously and said those were articles about her. She’d been mistreated by our local police and had sued them. “It comes up if you Google my name,” she explained, “and I’ve lost clients in the past because of it.” David and I looked at each other. A caregiver who was going to teach by example that people should stand up for themselves bravely when they feel they’ve been wronged? We were fully on board. I don’t think she expected that to be a selling point. 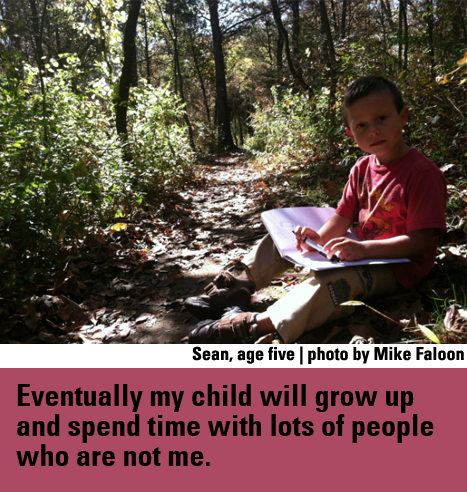 We hear a lot about how evil it is for parents to “farm out” the care of their children to child care. “If you can’t stay home and raise your kids yourself,” says at least one internet commenter on every single media story about child care, “then you shouldn’t have had them in the first place.” That particular brand of all-or-nothing rhetoric never really did much for me. Eventually my child will grow up and spend time with lots of people who are not me. He’ll go out into the world and have to make his way through a society full of different people with different opinions. He might as well start practicing for that now.

In Milo’s daycare there are kids who speak three languages, kids with same-sex parents, and kids who come from families where two different religions are practiced. One girl shows up regularly in a tutu, while another girl arrives in plaid flannel shirts. There’s a giant dog who gracefully tolerates the kids testing the boundaries of what is considered “gentle.” Milo is learning from all of the people (and animals), young and old, whom he spends his days with. But more importantly, he is learning to love all of them in spite of what they may or may not all have in common. I’m hoping that, too, will help him become the kind and thoughtful person I want him to be.

The skills kids learn in daycare are skills that we should all keep thinking about as we get older. Sharing, acceptance, and tolerance are what we talk the most about, but equally important are confidence and sticking up for yourself. My abilities as a parent are limited by the fact that I am just one person. I can’t possibly model and teach everything that I want him to learn. He needs other people for that. And if he needs someone to teach him what to do when the police give him an unwarranted hard time? Well, now he’s got that, too.

*In big, bad, socialist Canada, parents are guaranteed one year of leave with a new child. A parent who is on leave is given employment insurance for the months he or she is off and many employers “top up” to the parent’s existing salary. Two-parent families can split the time as they see fit, so I stayed home with Milo for the first eight months of his life and David did the last four months. Do I even need to say that this is wonderful and valuable for both the child and the parents? Probably not.

Hearing from other parents who are part of the punk scene is reassuring, enlightening, and hilarious. That’s why in each column I’m asking one or more people to answer the same seven questions about their parenting experience.
Mike Faloon lives in New YorkState with his wife, Allie, and his kids Maggie and Sean. He is an elementary school teacher and publishes the zines Go Metric (mostly about music) and Zisk (mostly about baseball). He’s also written a collection of short stories called The Hanging Gardens of Split Rock and published Fan Interference, a collection of writings from Zisk.

Jennifer: How does your background in the punk/underground scene affect your parenting?

Mike: We plan our vacations a year in advance—just so many variables to juggle. But that’s not just specific to me being involved in punk/DIY culture. Two, our kids are growing up thinking it’s normal for people to publish and play shows and produce their own cultural artifacts.

Jennifer: What quality of yours do you most hope to pass on to your kid?

Mike: Of my wife’s: openness with people. Of mine: determination.

Jennifer: Have you found solidarity within the punk community when it comes to parenting?

Mike: I’d say it’s more bemused tolerance. Few of my friends from music and writing circles have kids. They’re nice enough about it—they ask how the kids are—but they don’t need me to dwell on The Lego Movie or the extent to which my kids are artistic geniuses. (They really are. Both of ‘em.)

Jennifer: Do you have different experiences in different groups of friends?

Mike: Very much so. With music/writing friends, it’s pretty much like I described above. It’s the opposite with friends we know through daycare or school. We’ve met great people, though our conversations are markedly different. I do my best to convince them to pursue interests outside of work and family, but to little avail.

Jennifer: What music are you most excited that your kid is into?

Mike: I let my mp3 player run on shuffle when I’m working around the house. Taking a suggestion from my friend Kevin Dunn, I make periodic playlists based on the tunes my kids dig. Right now, Maggie’s into Dean Wareham’s “Love Is Colder Than Death,” which is so much more appealing than the title implies (She says it’s calming.). Sean’s into a new Guided By Voices tune, “Littlest League Possible.” Before I’m awarded any “Cool Parent” points let me also acknowledge that, 1) Van Morrison’s “Rolling Hills” is a big favorite—mainly because none of us can make out the lyrics and improvising our own is a lot of fun, and 2) Miley Cyrus is probably their all-time favorite. I tried to be open minded and download a current pop fave and have regretted it ever since.

Jennifer: Describe the last time your kid made you laugh really hard.

Mike: We watched Johnny Dangerously a couple weeks ago. Our son picked up on how much my wife and I were laughing every time Joe Piscopo did the “My mother did that to me once…once!” joke. Sean used that today. I inadvertently broke the one-cup-of-juice-at-dinner rule. Sean responded with, “Dad, you gave me two cups of juice once…once!” He killed. Maggie slays with her dances. I’m made of pure anti-diva, but that kid moves!

Jennifer: Who should I interview next? Why?

Mike: Kevin Dunn. He and his partner Anna are raising kids that get along well and love to read and play in bands. And my brother Casey and his lady friend Becky. You won’t find more grateful parents.