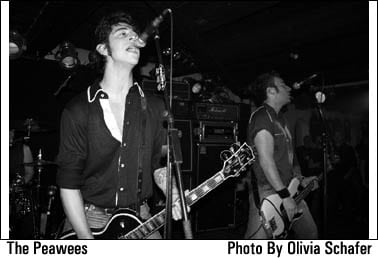 I thought it was about time I go to Denmark to check out this legendary fest, and what better way to celebrate my birthday this year than to dance along to the Peawees, Peacocks, Turbo A.C.’s and many more rockin’ bands! Supposedly, there was to be an amazing headlining band the first night of the Bash. Rumors were flying and everyone was excited, until it was announced that Volbeat, a metal band from Denmark who had just played Copenhagen a week before the bash, were this great mystery band. Yes, I was disappointed when I found out about this, but it wouldn’t ruin the whole weekend for me!

Friday night the Peawees were the opening band (that’s just insanity if you ask me), then Volbeat, and then the mighty Peacocks were to end the night with a bang. The place was packed with not only rock’n’rollers, punks, rockabilly dudes and dudettes, but also with angry metalheads who, instead of gently touching your arm to pass you, punched you in the shoulder just to get by; not pleasant when you have a fresh tattoo there. There was an angry cloud of hostility and I did not feel comfortable, but at the same time I was very excited about seeing my friends the Peawees again, who I hadn’t seen in two years. There was a slight problem, though. You see, three of the Peawees had been in Denmark since earlier that afternoon while the fourth Peawee was stuck at the airport in Italy with all their instruments. He had to take a later flight and thus soundcheck, as well as the whole show, had to be pushed back. With all this extra hassle, the Peawees only had twenty minutes to play by the time they all got to the venue. Not cool. They were quite speedy about getting ready and managed to play thirty minutes of fast, raw rock’n’roll songs that we all love. I caught a glimpse of their setlist and saw they had intended on playing some new songs, but due to the rush they cut those songs and stuck to the classics. Despite everything that had gone wrong, it was still a solid set, the Peawees rocked the house, and even the metalheads were into them. It was the first time I saw them with Livio on drums, and even though I still miss Pulcio, he is a good new drummer for the Peawees; I see the potential to be great!

Okay, on to the next band! I only caught a glimpse of Volbeat as they were leaving the backstage area for the stage, and, as intriguing as the fluffy leopard printed pants were, I decided to hide out in the backstage during their set and not get trampled. You could hear and feel the stomping of the sweaty metal fans as they watched and enjoyed their Volbeat. Backstage, we all felt safe and glad that we were not out there. I would just like to state, in case any of you missed it, I do not like metal. So if I can help it, I will find somewhere else to be when there is a metal band playing. Thus, I have nothing to say really about Volbeat, since I missed them. 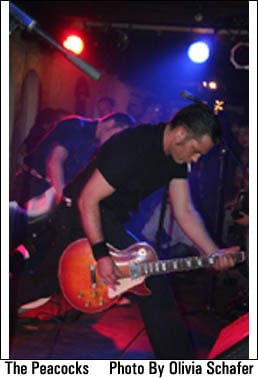 By the time the Peacocks hit the stage most of the angry metalheads had left the building, which was good because that meant more space for everyone to dance. The Peacocks played for what seemed like hours and it was, as always, a blast. Simon played the entire set on my boyfriend’s slap bass, which just made the whole show more special, hehe. The Peacocks are one of those bands, just like the Peawees, that are always so cool to see, no matter how good or bad they play. Because even their worst show is a million times better than some crappy band’s best show. They sweat and breathe rock’n’roll and play their songs with so much passion that you just can’t help but shake yer ass. And everyone was dancing the night away. It was fantabulous.

The second night of the Bash had a change in bands. According to the flyers, Deadline were to be the headlining band of that night, but they canceled all their non-U.K. dates, so Denmark’s Lurkers stepped up to fill the spot. Opening that night, though, were Italy’s Hormonauts—wow, what a band! One of the best live bands I have ever seen. They’re all crazy and amazing musicians. It was an unbelievable set. This was the first time I saw them and the first time I had ever even heard them and I was completely blown away. 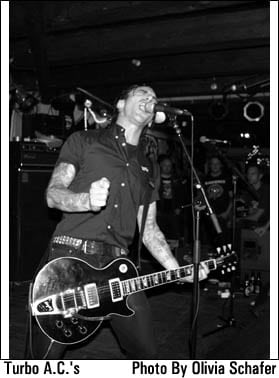 The Turbo A.C.’s were also a first for me that night. I can’t believe I had never seen them before. They had a new guitarist with them, and I was told by some that this was the first time for them to see them with the new lineup, so I didn’t feel like such a loser because it would be the first of some sort for some as well. Anyways, the Turbos put on a good, rockin’ show as well, with a few fuck ups here and there but it was a fun set and it got everyone laughing and dancing some more. I’m gonna see them again later this month in Amsterdam and that is something I am looking forward to as well. Not only are they a very entertaining band to see live, but also pretty cool guys themselves.

The Lurkers played well but they just weren’t doing anything for me. So I spent the rest of the night talking, laughing, and dancing with friends. All in all, it was a great weekend. Four out of the six bands were awesome and made the trip totally worthwhile. From what I hear, this is to be the last ever Punk and Billy Bash, which is a shame. Then again, who knows? Ya never know….