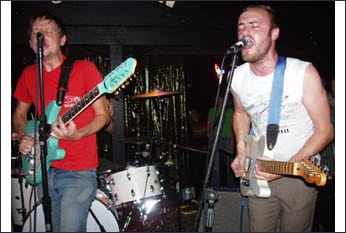 There aren't too many bands that can balance the line between good and artsy like The Intelligence do. And there aren't too many bands that can be as random and confusingly funny in person as they are in their music without seeming contrived. There's no sense that can really be made of The Intelligence because they seem to make it a point to give you what they want in response to a question. This response will usually involve some sort of barnyard animal, a violent act, and an unpleasant bodily function.
For example: Miss Erika: So Lee, what do you like about being on tour?
Lee: Well, Erika, I especially like pooping on chickens that we hit with our van
They're not cliquey or dick-headed; they just don't really take anything seriously, especially themselves. I've done a few interviews in the past four years and I've learned something from every one. The lesson I learned from my interview with The Intelligence is this: giving drugs to a group of guys who are already pretty delirious and doing the interview in the van they've already spent way too many hours in can have a really strange outcome. Enjoy.

Miss Erika: Who are you and what do you do?
Lars: I'm Lars and I play guitar and sing.
Robert (from the Tyrades): I'm Robert and I like to go by "Shots" every once in a while.
(Pronounces "shots" so it sounds like "shats.")
Lee: I'm Lee and I'm shocked.
Robert: Wait, I want to change my answer. My name's Robert and I read maps.
Nicholas: I'm Nicholas and I play guitar.
Matthew: I'm Tommy Tobla and I play keyboards.
Miss Erika: No, seriously. First...
(Two minutes of incoherent chatter)
Lars: We're running out of tape.
Miss Erika: Your music is really open to interpretation. It's really cinematic. Is that intentional or just it just develop like that?
Lars: It's all I could come up with.
Lee: That question blew me away.
Lars: But I do like to go, "Hey, Nicholas, get cinematic!"
Robert: Shots likes movies. Blockbusters!
Lars: I'm thinking Garden State Two on this one.
Lee: (Belches) Rent!
Miss Erika: This one's for Lars. You got a lot of instant attention from the first album.
Lars: I strongly disagree with that. Are we talking about the same band? I ego surf that stuff all the time and there's not much out there. Where'd you hear it?
Miss Erika: I read most of it.
Lee: We'd like to see that!
(All laugh)
Robert: Come on, Questions. You can do it.
(At this point I had been given the name Questions)
All: Come on, Questions. (laughing)
Miss Erika: Do you agree people's assessment of your music?
Matthew: Your art punk and Mark E. Smith (The Fall) style vocals.
Lars: Of course. What else would you compare it to?
Miss Erika: What? Can you elaborate on what you just said?
Lee: (slurring) Other people know get what he just said.
Miss Erika: Uh, fair enough. I had better ask Lee this: he passes out from the Xanax.
Robert: Is your name Questions or Confused?
Lee: Questions or Complaints?
Miss Erika: Lee, you do a lot of film stuff. What have you done?
Lee: I work at a film lab and I make films and stuff.
Miss Erika: No, not what you do for a job! Your films!
Lee: I don't what you're saying, man.
Robert: That was pretty straightforward.
Nicholas: This is painful.
Lee: Why is this painful, Nick?
Nicholas: I'm not talking about you.
Lee: Well, you said it right when I was answering.
Nicholas: I was just joking, buddy.
Lee: Well, your timing was bad. I've had a lot of bacon today. Jerkbeast was a film we made in Seattle a few years ago. It was a cable access show first. It features another member of The Intelligence and The Popular Shapes, Nicholas R. Brawley. Yeah, it's a punk rock movie about a monster for a drummer and it's awful. I recently made a new short film called Piledriver.
Lars: Which is totally great.
Robert: It so is.
Lars: I haven't seen it, though.

Miss Erika: How do your films fit into music?
Lee: It doesn't. I have to completely block it out and then when I get home try and pick up the pieces.
Miss Erika: Doesn't Piledriver have all Intelligence songs?
Lee: Hey man, you've got to use your resources. I didn't even have to ask. I just showed up one day and said, "Here you go. This is what I did with your stuff."
Robert: Does Questions like shots?
Matthew: Why don't we ask you the questions?
Robert: What are you doing in San Diego?
Miss Erika: I have no idea. Maybe I'm trying to get home back to Mexico.
Lee: Me, too!
Miss Erika: I came with The Orphans.
Lars: Did you guys watch porno or Golden Girls?
Miss Erika: Uh, no.
Robert: Robert: Oh, 'cause Wade was really creeping us out talking about old lady porno and Golden Girls. Oh, you should ask them how many of them have backpacks on this tour.
Miss Erika: How many of you have backpacks on this tour?
Lars: There's two of us left.
Lee: Both Lars and my clothes were stolen on different occasions in San Francisco.
Miss Erika: What kind of situation was your backpack in that it was stolen?
Lee: Mine at the Hemlock and Lars's in lower Haight.
Lars: They were gifts to the crackheads.
Lee: I don't want to tell you but that window lock is broken. [Points to one that doesn't open.]
Miss Erika: Is that why you guys are still wearing the same thing you were wearing yesterday?
Lars: Yes. I was wearing my other favorite shirt six days ago but...
Robert: But, damn, that crackhead looked good in orange! He's taking pictures of himself with Nicholas' camera and posting them on MySpace.
Lars: His name is Backpacks.
Robert: Okay, Questions. Do this! 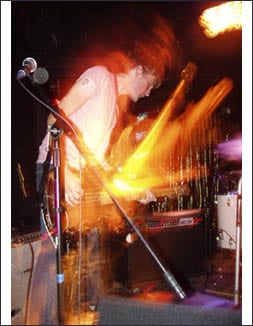 Miss Erika: How did growing up in the Pacific Northwest affect your music?
Lars: It didn't. I'm from Bakersfieeeeeeld!
Lee: Here's the thing with that question: how would we know? How would you know or be aware of how it affected your music? Like, consciously.
Miss Erika: Like, given what music has come out of where you're from.
Lars: Oh, like we wouldn't let Lee leave with his long johns and cut-off shorts.
Lee: That was a hard thing to deal with.
Lars: We'd do what we do on Mars.
Robert: Bacon wants some Chips but he can't have them.
Lee: Which one is Chips?
Lars: Nicholas is Chips.
Nicholas: I'm Chips.
Miss Erika: This is for Lee and Nicholas. You guys have been in a lot of bands together?
Lee: Three.
Nicholas: Yeah, just three.
Lars: What three?
Lee: The River Rats, The Popular Shapes, and this one. He managed Steaming Wolf Penis. So that might be four.
Miss Erika: You need to tell the public about Steaming Wolf Penis 'cause as far as I'm concerned that's the best band you've ever been in.
Lars: I agree with that.
Matthew: I agree with that.
Lee: Steaming Wolf Penis is a fake band from the movie Jerkbeast.
Miss Erika: So what do your parents do and do they care about what you do?
Lars: My dad's a doctor and my mom was a nurse. They are super supportive... and very depressed.
Lee: My mother's a psychic and my stepfather builds trucks. I'm not kidding. I guess they feel okay.
Nicholas: My mom was a recess teacher and my dad works for Boeing but I still don't know what he does there.
Lars: What's a recess teacher? Is that dumb? Does everyone else know what a recess teacher is?
Nicholas: She's the lady that walks around the schoolyard during recess.
Lars: Shit, I want that job.
Nicholas: Nah, you can do that. You can get a job at an elementary school in the office. Then during recess you patrol the schoolyard. You just walk around and make sure kids aren't pulling each others pants down.
Robert: I walk around the playground but I don't get a paycheck.
All: Shots! (laughing)
Matthew: I don't know what my parents do.
Miss Erika: What about you, Robert?
Robert: My dad is a born-again Christian and a Promise Keeper and my mom owns a company. They've broken up.
Lee: What do they think of The Tyrades?
Robert: My mom doesn't know about The Tyrades. I keep it a secret. Shhh...
Lars: Your parents aren't together, are they, Nicholas?
Nicholas: Yeah, they are. They're in Germany right now.
Lars: I'm jealous. I'm in San Diego. 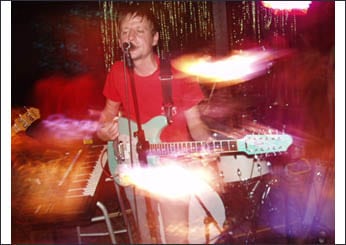