Since this is my first column, here's the intro: Some of you may know me from Freak Tension, Wisconsin's longest running horror and punk fanzine. If you've gone to shows in Wisconsin or Minnesota regularly within the last seven years, you've probably had a copy of it forced into your hands at some point. You might have read it. You might have thrown it violently to the ground. You might have taken it home and used it to build a papier mache monkey body. Into that body's head you probably inserted the brain of Chumpo, your pet hamster. After it was completed, you probably took your monkey/hamster/Freak Tension hybrid to the movies and made out with it. Most likely, you took it home, where it wouldn't put out for you, so you set it on fire. Your apartment probably burned down. Now you're homeless and it's all because of me.

This column is going to be much like FT was. It will feature my version of music and movie reviews, as well as random stories from my life, such as the one about how I spent a few weeks this summer training to become a professional arm-wrestler. To help me in my quest, I invented a bizarre new exercise, which a creepy and strangely buff grandma at the gym thought looked "pretty hard." Unfortunately, all my practice brought me was a small case of Carpal Tunnel Syndrome. Which leads me to...

Sex Slaves: Bite Your Tongue
If the members of this band had been as intense about their music as I was about arm-wrestling, they might have all gotten Carpal Tunnel Syndrome before they could put together this hideous poop-bomb of a CD. While they were icing their aching wrists, they might have had the precious time needed to realize that the world wants to hear a glam-punk band melancholically moaning through lyrics like, "I need one more night to give my love to you," about as much as they want aliens to come down from Mars, steal all our dairy cows and suck all the flesh off of the women. Additionally, do we need more odes to alcoholic beverages? Maybe it's clever if this is the first album you've ever heard in your life. You know what? Screw Carpal Tunnel. I wish these guys would get that new disease that causes your bones to turn into paste and maggots to crawl out of your pupils. Then they'd really think twice about what they do with their time. (Radical Records) 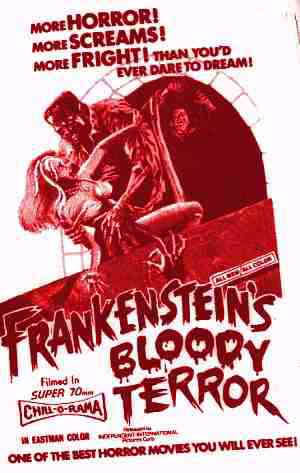 Frankenstein's Bloody Terror
Sure, there have been some cool-looking werewolves in movies. The Howling had some great ones. So did American Werewolf in London. The ones in Underworld looked like assholes. However, the coolest looking werewolf ever committed to film is Waldemar Daninsky, the main character in this movie (which, by the way, has nothing whatsoever to do with Frankenstein). There is simply no match for Waldemar's fur-coated visage, particularly when he turns forward and lets a thick stream of blood pour out of his mouth and down his hairy chin. It's like he bites his victim, but he can't quite hold it down, so he turns around and pukes up all the gore. It doesn't make sense, but it looks awesome. There are some amusing stories that surround this movie. Beyond the strangely misleading title, there's the fact that the werewolf character was supposed to be Spanish (this is a Spanish movie, after all), but the censors in Spain at that time didn't think that it would be possible for a good Spaniard to be a werewolf, so the filmmakers were forced to make the main character Polish. Apparently, Poland is teeming with the hairy bastards. (Shriek Show DVD)

Weaving the Deathbag: Compendium
If someone were to force me to pick my favorite hardcore CD of 2005, this compilation of Weaving the Deathbag's first four seven-inchers would be the one. It embodies everything that is good and true in hardcore punk rock. Beyond that, it's proof that if you try really hard and keep working at it (these guys have been in the punk game for years in bands like United Super Villains, Asinine Solution and DeFacto Oppression, among others), you might end up with something a hell of a lot cooler than Carpal Tunnel Syndrome. Hmmmm, maybe I should give this arm-wrestling thing another shot. (Hungry Ghosts Records)

With that said, I'll be back next month. Until then, check out my website: www.wiscpunk.org/freaktension/. There you can find more weird music reviews, bizarre tales and the world's first chopped and screwed horror story. Also, check out Red Scream #3 for some fun horror fiction from me. Remember, road kill burns best when it's dried out.