I wasn’t exactly sure what to expect when I rolled up to Gigi’s Cocktail Lounge on a Tuesday night at 8pm. Since moving back to Ventura, I have done my best to go to as many shows as I can, but I never made it out to Gigi’s, the consummate example of a just-under-the-radar dive-bar tucked outside the persistent humming of the Victoria Avenue exit off the 101-freeway.

The first thing I noticed when I walked in was that there was no stage (awesome) and that the soundboard was huddled against the far wall, sectioned off with police-like caution tape (potential for problems, I thought). I was obviously early, so I grabbed a pint and eagerly awaited the first band of the night: French Exit.

Razorcake readers are probably already familiar with the punk band French Exit. Their debut LP, Guts & Black Stuff, released last year, received favorable reviews from our very own Sean Arenas and Garrett Barnwell. I agree with both of them, as I was instantly hooked on their brand of catchy, Weezer-esque, mid-tempo punk rock. I had seen them once before opening for Andrew Jackson Jihad, but now that Guts & Black Stuff was in my constant rotation, I was excited to see them again. Did I mention the Weezer connection? French Exit opened with “Dominoes,” from their 2012 split release with Signals Midwest, and immediately I smiled: the whoa-whoas that open the song are just too contagious, too obvious, and too fun that they instantly made me happy. 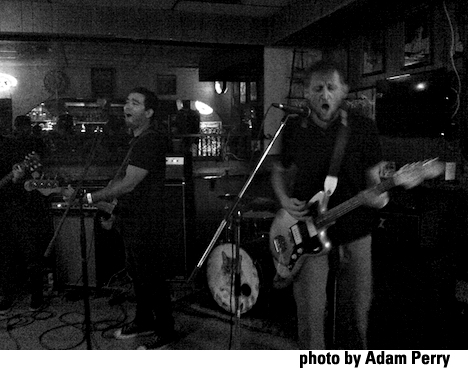 French Exit sounded great—they were spot on, hitting each note with increasing energy and precision that I could not stop bobbing my head through their roughly thirty-minute set. I was especially happy they played “Impossible,” “Home,” and “Backspace” from Guts & Black Stuff, and “Favorite Actress,” from their Worst Case Scenario EP released in 2011. They also get bonus points for having the newest issue of Razorcake at their merch table. I highly recommend checking out French Exit if you haven’t already. Garrett and Todd have a great interview with the band in issue #81, and their bandcamp page can be found here. 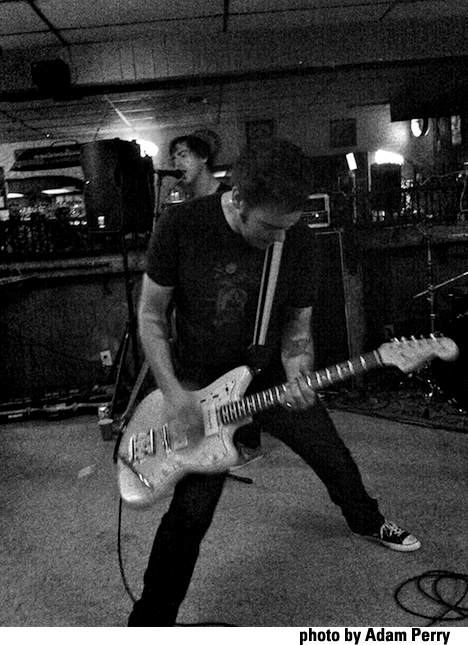 Up next was Chicago’s All Eyes West. Prior to the show, I had never heard of them, so I decided to check out their bandcamp page, which can be found here. A three-piece band that plays melodic punk rock in the vein of Hüsker Dü, Drive Like Jehu, and Jawbreaker, I thought they were good, but not great upon first listen. After watching them play however, I need to give them more credit. Seen up-close and not expecting to be impressed, All Eyes West were actually pretty good. In addition to the above named bands, I also picked up a Foo Fighters-vibe, which in most cases could be terrible, but was actually carried out pretty well by the band. The guitar player, who I was standing just in front of, could not keep still—he was clearly having fun in the moment despite the fact that most in the crowd were still shuffling between drinks inside and smokes outside. I have to give props to All Eyes West for just putting their heads down and plowing through their set.

One of the coolest things of the night was the fact that as each band finished their sets, the members of the other bands would help break down their sets and assemble the next band’s gear. Just the way a DIY punk show should be, right?

It seemed only mere minutes after All Eyes West’s set when Montalvo, California’s The Fucking Wrath came up next. It was a homecoming of sorts for the band, as all of the members grew up and starting jamming in the area. Combining a ferocious blend of hardcore punk and metal, The Fucking Wrath was as their name implied: absolutely brutal. Even before they played their first note, it was obvious that most people came out to see the Wrath. People pushed closer. Absent was the empty space that existed between the first two bands and the audience. Whereas the audience was a bit too cool for school for French Exit and All Eyes West, such an attitude was pushed aside for The Fucking Wrath. Maybe it was due to the fact that The Fucking Wrath were nearing a break-up and all their friends wanted to soak in one more epic evening with them. None of the members are on bad terms or anything like that, just that “adult” responsibilities like being a parent and holding down a reliable job are curtailing the band into the nebulous realm of “inactivity.” Maybe it was because the band was back home, and, in the words of guitarist and singer Craig Kasamis, making the show’s location both “the birthplace and deathplace of the band.”

The Fucking Wrath lived up to the expectations. They were fantastic, and despite the fact that by now the mostly wasted crowd’s reaction nearly tore down the soundboard and a hanging light, their set was the best of the evening. Bonus points should also be awarded for their set, as Craig gave a shout-out to his Mom, who was in attendance. I highly suggest you check out The Fucking Wrath, and if you are in the VenturaCounty area on September 20th, check out their final show, which promises to be a 90-minute set. A link to the band’s Facebook page, which will include information on their final show, can be found here.

Okay, now let me get this out of the way first before talking about the final band of the night, Planes Mistaken For Stars (PMFS). (In a hushed voice): I never really got into them before they went on a hiatus in 2008. Now before you chastise me, it’s not that I don’t like them. I just came across them late, with their final album Mercy being my first exposure. I liked it just fine, but it didn’t move me the way Hot Water Music did, another band I will honestly disclose that I came across just prior to their second hiatus. Before you take away all of my punk credentials, please just realize that I only disclosed that information to provide the proper and honest context. That said, they were really fun to watch. The crowd had clearly dispersed some since The Fucking Wrath’s set, but that did not diminish PMFS’s enthusiasm. Their set was akin to watching a great, chaotic band as if they were ripping through a beer-soaked practice in their garage. Several times throughout their set, guitarist and lead singer Gared O’Donnell knocked over his mic-stand, only to fight back a smile when someone kindly repaired and replaced it. For a band coming off several years of hiatus and only having a few shows under their belt since reuniting, they were fun and loose in all of the right ways. Before I knew it however, their set was over. I was really anxious when the evening began, uncertain of what to expect, but by the end of the night I could not have imagined doing anything better with my Tuesday night.

BE MY DOPPLEGANGER: Artless: LP