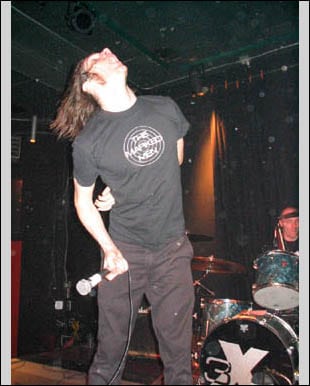 Pissing Off Psychobilly Fans Everywhere: An Interview with the Riverboat Gamblers By Todd Taylor

Let's face it: we, as people, like rock and roll. It's one of those simple urges that we have. You can deny it and hide behind your electroclash remix 12" singles all day long, but the fact of the matter is that we need that white-hot blast of energy that only loud guitars and caterwauling drums can provide. The problem is that so many bands have done such a poor job in recent years that it's given rock and roll a bad name. Soooooo many bands have come out with their long, unwashed Grand Funk Railroad haircuts and their practiced-in-front-of-the-mirror rock poses that you would almost be correct in assuming it was once again the territory of hippies and wank maestros. Almost. But even in just the past fifteen years, there's a ridiculously long list of bands that rocked like the dickens without ever resorting to a wince-inducing "Hallelujah!" The Mono Men, the Didjits, Scared of Chaka, Turbonegro, the Sultans... there's literally not enough room on this website to name all of them. The Riverboat Gamblers continue in that fine tradition. Genuine, sweaty, blasting rock and roll that will make believers out of the most staunch naysayers. Boo ya!

Todd: How many jobs do you currently have?
Mike: I have four jobs, but mostly I work at a group home.
Todd: What's the hardest transition you make from going on tour around the world and being a frontman to working your day-to-day job in Denton, Texas?
Mike: Mostly, it requires the most patience of anything. I've got six adult children giving me constant streams of useless information; six of 'em coming up to me and telling me, "Hey, we've got more milk!" "Hey, I've got a book about Elvis!" for seven hours straight or whatever. And they're also fighting each other.
Todd: Do you think you have a lot more patience for tour and regular band stress, then?
Mike: I think it's so much more relaxing. It's so nice to not have to take care of anybody but myself, pretty much. It's really hard to describe the weird mental state that dealing with the group home puts you in. It's kind of like this constant, grinding stress of something ready to go wrong at any second. Even though, yeah, it can be like that on tour, I'd rather deal with tour than that.
Todd: Talking about stresses that come up, who do you think has reacted the worst to the Riverboat Gamblers playing live - either a venue or somebody in the audience - who was adamant about telling you, "You guys suck"?
Mike: The psychobilly crowd. Those guys - I don't want to pigeon hole all of them - but there are certain groups of them who think inside of a very small, concentric circle and we don't fit in very well. But, for some reason, promoters think that we'll fit in great. Those psychobilly guys are always very vocal about not liking us.
Todd: Any confrontations?
Mike: We were in Belgium, playing this big festival and a couple guys were coming up to the stage and yelling and swearing at us in Belgian-ese or whatever heathen tongue they speak over there, whatever godless form of language they've learned. To us, that's pretty exciting and hilarious. First thing we do was start blowing kisses and stuff at 'em and it whips them into a frenzy. In the midst of this sea of guys with giant triangles on their heads, this burly half-sasquatch guy with long hair and an Anti-Seen t-shirt rumbles his way up to the front, silences them all, and bangs his head like he was at a Metallica concert in '84. Bangs his head with complete vigor, which was nice of him.
Todd: Did you guys end up having to pay fifty dollars for a piece of acoustic tile at another show?
Mike: Yeah. In Chicago. We have a standard, "Take it out of our pay and then give it to us." That's the main thing you do. If they're charging you for something (the band broke), always take it, even if it is a useless piece of tile, because then you can frame it. Fifty dollar tiles?
Todd: You kicked it out of the ceiling?
Mike: Yeah. We didn't even tear that one up. I accidentally knocked it off the top and it got ripped up. Whatever. 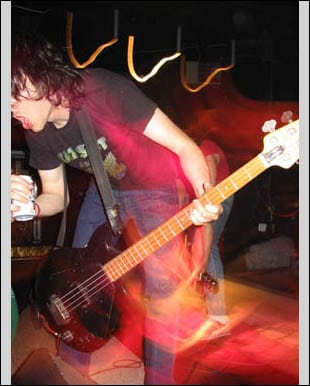 Todd: Do any of the guys in the Riverboat Gamblers skate?
Mike: Oh yeah. I'd say three of us. Pat and I, especially, skate a lot. We actually went out the other day to some pools to try and take some pictures, but we're pretty bad. I used to watch skate videos and go, "Wow. One day, if I keep working, I'll be able to do it." Now, when I watch it, I'm still inspired and have a really good time watching new videos, but there's more of a sense of defeat. God, these kids are so good and they're so young. I still like to do it a lot. In some ways, it's more fun now. When I was really, really into it, I used to go out and push myself and go forward and now it's strictly for fun.
Todd: Instead of performing.
Mike: I used to be, "I want to get better so bad." Now I don't really care about getting any better. I just want to have fun.
Todd: Which show was more memorable - playing with Chris Isaak or with the Mighty Mighty Bosstones?
Mike: Probably with the Mighty Mighty Bosstones. Chris Isaak, we didn't really see. He was on a bigger stage, way later that day. With the Mighty Mighty Bosstones, it was us, two other bands, and the Bosstones. One band had snaked their way into the bill through the promoter and it was frat rock funk band. They were horrible. Horrible. They were called Alligator Dave and said stuff like "I like to eat pussy," "show your titties," and stuff like that. They played and they were really bad. We played first. People were still coming in. After our show, Dicky Barrett was really into it. Bought a shirt and stuff. At the end of the night, when the Bosstones played, Dicky Barrett was on the mic. "Give it up for the Riverboat Gamblers." The crowd cheered. "Give it up for Dynamite Boy." The crowd cheered. Then he was like, "Did you like Alligator Dave?" and some people cheered. He's like, "I've got to be honest. I really didn't like them. It's not really my thing." At the end of the night, some altercation went down where Alligator Dave was really mad and talking shit to Dicky. Dicky's a pretty big, tough dude and he wasn't backing down. He came and told me about it later. Definitely not asking for help, but if me and Dicky Barrett could have got in a fight with a frat rock band, that would be something to tell the kids. That'd definitely be a story to pass down for generations. Unfortunately, it didn't go down like that.
Todd: What song would you want to be played at your funeral - what encapsulates Mike Wiebe?
Mike: The best song to be played at my funeral, or any cool person's, would make "Make Sure There Aren't Any Squares at My Funeral" by Hickey. Matty Luv. You know, he passed away.
Todd: Tell the story when you had to do a surprise piss test.
Mike: I barely ever do much drugs or pot or anything like that. This one time, randomly at a party, I thought, "Well, whatever. I'll try this thing." So, of course, the next week I get into an accident at work and I have to take a piss test. I'm freaking out. "God, I just got this job and I've got to take a test. What am I going to do?" So I knocked on this neighbor's door - who I'm friends with, but not great friends with. I just decided not to even beat around the bush. I knocked on the door and go, "Hey man, can I borrow a cup of urine?" He gave me some urine. I filled it into a condom and tied it off. Now they have the sensors on the piss cups, the warming strips to tell whether if it's the right temperature. I thought, "I've got to keep this warm." So I set in on the front of the dashboard of my car. It was in the summer. It was hot. I'm driving to work, watching this urine-filled condom roll up and down my dash and reflecting on what my life has come to. So, after that, I got to the parking lot and I taped it to the side of my leg and walked in. I cleverly had a Misfits button on and I went into the bathroom and I took it off and popped the condom and squeezed the urine in there, but I hadn't practiced with condom pressure techniques, spraying through the hole. And there's no sink in there because they don't want you to - as I was doing - messing with your thing. I got urine all over my hands, the cup, my shirt and stuff. It was freaking me out. I kind of just walked out with a frazzled look and piss everywhere. Oddly enough, I passed with flying colors. Or, I guess, my neighbor Ian passed with flying colors, actually.