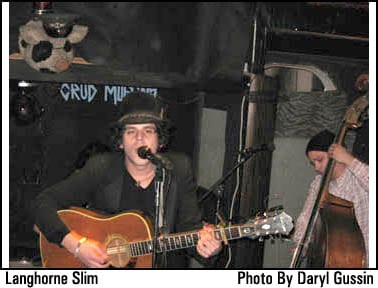 After about a week I was completely sick of it. I can only take so much hype and general excitement before I lose interest and start to obsess about something else. If you live in California, you might have been subjected to the same frenzy. Not the primary elections, I’m talking about the most recent wave of Pinhead Gunpowder shows. First, two shows at mainstream venues were announced – the Chain Reaction in Anaheim, and the Troubadour in West Hollywood. To get tickets to these shows you had to be pretty on top of it. I folded. There was no way I was getting tickets, and the ebay prices were gonna go places I do not tread. Then I heard about the secret shows in San Pedro and Long Beach, but by that time I had already lost interest. Pinhead Gunpowder mania had bitten the dust for me. And as the shows were becoming merely an afterthought, from the depths of San Luis Obispo, my brother, Willie, called and expressed his enthusiasm, and was so committed to attending one of these shows that he was willing to make the trek and drive down to Long Beach for the one on Saturday. Pinhead Gunpowder fever was back on. Worse then ever.

The show was being held at a warehouse space called Babe’s Warehouse. Adorned with vintage motorcycles and Ron Paul propaganda, it was a really mellow spot and the people who ran the place thankfully never let it get way over capacity.

The first band to play was a rootsy, three-piece, rock/punk act named Langhorne Slim. The lead singer was a little too emo for me, but there’s no denying that they were fun to watch. Especially the bass player who was playing the fuck out of a stand-up bass. Still, it seemed they played much longer than they should have, considering the amazing bands which were to follow them. 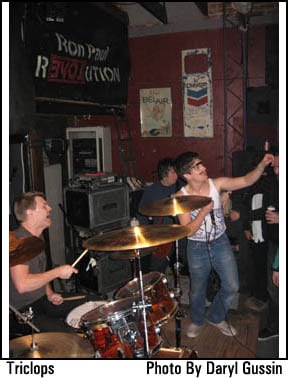 Once they finished and broke down their equipment, Triclops set up and proceeded to unleash their own brand of tripped-out brutality. Containing members of Fleshies and Victim’s Family, Triclops have become quite a fan favorite. Even though this is the third or fourth time I’ve seen them, and I know exactly what to expect, it’s always amazing and relentless. Pure violence, but in a backyard wrestling meets Mad Max meets ‘80s L.A. punk riot sort of way. 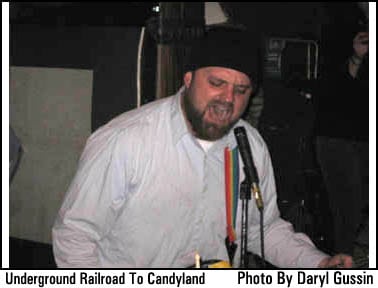 After Triclops, Pedro’s own, Underground Railroad To Candyland played. This band, in my opinion, is the official party band of the entire world. It’s not something you wanna try and step to: two vocalists, two drummers, guitar and bass, and a tendency to dress up like cartoon characters. It’s perfect combinations of fun, sing-a-long vocals, weird lyrics, and dance-all-night rock. But even though Triclops and URTC are both amazing bands, the band that had brought this unusual assortment of people together was the headliner. Known for playing very few shows and for writing amazing pop punk songs, Pinhead Gunpowder took the stage for quite a mixed crowd who were all very eager to see them play; some even appeared to be frothing at the mouth a tad. Or maybe my brother Willie was the only one. 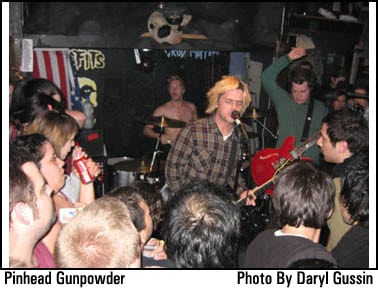 In regards to the band, what’s there really to say? You either understand what’s so good about them or you don’t. I personally like the fuck out of them. I own most of their albums and can't get enough of their super-catchy melodies and always-astounding lyrics, but I can understand why someone would think they’re overrated. Especially someone who hates Green Day and pop punk in general. But even someone who hates the music has to admit that it’s pretty interesting that a band can make people almost World Cup crazy by playing so few shows. That night Pinhead Gunpowder played to a full house with an audience that consisted of everyone from emo rock stars, to spiky haired punx, to just your average jocky shmoe who wanted to see the dude from Green Day. And through all the bullshit of restroom lines, over-priced drinks, and Ron Paul propaganda, the rest of us got to sway back and forth with each other and pretend like we were watching something historical, all the while wondering if we'd ever even see this band play again... except for the people who had tickets to the other shows. Those bastards knew they would.