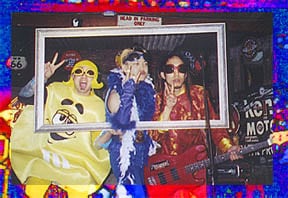 A few months ago marked the first time a band stayed at my pad while on tour. Having never met the guys before, I wasn't sure what to expect. Wild and crazy rock stars tearing up my furniture? Lazy, drug-addict egomaniacs to clean after? Instead, I got Peelander-Z, three very Japanese-looking and -sounding, panda punk RAWK, samurai action stars who could kick the Power Rangers' asses any day of the year, while whipping up some tasty noodles on the side. They put on the most unbelievably fun shows (as anyone at this year's SXSW could have told you) and helped open my eyes to a whole new outlook on life. This interview took place in the parking lot of Mr. T's Bowl this past January before NY-based Peelander-Z hit the stage on the last California stop of their tour. Read on or remain confused.

Interview and pictures of various Peelander-Z shows around LA by Heela Naqshband.

Heela: So, can you tell me your names and what you do in the band?
Kengo: Ahem. [cough] I'm sorry, we cannot understand English. That's why you speak my language. It's Peelander-Z language.
Heela: Loodoomeowahtoomutadootloolooloo?
Kengo: Yes, we need a translation here. It's gonna be English. No problem. Speak English.
Heela: Okay, which Peelander color are you and what is your instrument?
Kengo: Oh, my name is Kengoswee. My color is amarillo.
Heela: Yellow.
Kengo: Yellow, yeah.
Heela: And what do you play?
Kengo: Play? Singing, screaming. And six strings. Six pretty strings. I don't want to say guitar. Six pretty strings.
KO: My name is KO, Peelander-Red, playing bass.
Antonio Kazuki: Blue, Antonio Kazuki, playing drums, and champion.
Heela: Champion, okay. Now you say you're from Peelander Planet. Where's Peelander Planet?
Kengo: I don't know. I want to ask you. In your brain??
Heela: In my brain? It's?
Kengo: It's not planet, it's kind of feeling, like meditation. If you feel, you can see, but if you think too much, you cannot see. If you feel, you can see, maybe tomorrow, 11AM.
Heela: You have a sign (note: while playing, Yellow, Blue, and Red hold up various posters) that says, "Don't Think, Feel." Explain this. Why is this so important?
Kengo: Now you are thinking about "Don't Think, Feel," right? That's 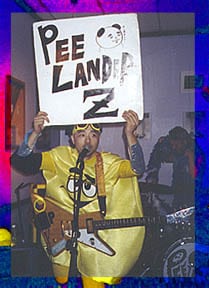 no good. Don't think. Feel.
Heela: So what do you guys feel?
KO & Antonio Kazuki: Everything!
Kengo: They don't have a translator. That's why they cannot speak English. I can speak English. I have a good old-fashioned translator machine. [laugher]
Heela: Okay, how psycho is Jaico? (referring to their ode to an ex-sweetheart, Jaico Psycho).
Kengo: How psycho is Jaico? No, I don't want to talk about my ex-girlfriend, because my wife going to kill me.
[Laughter all around, considering Kengo's adorable wife is barely five feet tall and weighs less than one hundred pounds.]
Kengo: Yeah, actually Jaico is a very famous Japanese cartoon character. Ask Japanese people, everybody knows her name. Sometimes we cannot find real name in Japan, maybe here we can find. Yeah, I made a song for Jaico, 'cause she was psycho.
Heela: Okay, good. Where or who is the best Peelander audience?
Kengo: We cannot find in the ass. We cannot find on the ass.
Heela: On the ass?
Antonio Kazuki: Earth. [laugher]
Kengo: Earth, earth. Because Peelander people always crazy. They never dance. They're like this, just standing, [shows us how they stand] and we play. But I can feel. They look like young people, look like '60s, Jimi Hendrix-style. Rrrooaarr! But I want to say? You ask about USA, right? Uh, Hawaii.
Heela: Hawaii?
Kengo: No, we never played Hawaii. I want to say? except New York City?
Heela: Yeah, the other places.
Kengo: The other places are beautiful. San Francisco, we got a good Chinese restaurant, that's why I love San Francisco. If we got a good Chinese restaurant in LA, I want to say LA is fine.
Heela: Who's the tall white guy following you everywhere?
Kengo: White guy? No, he's not guy, he's android. Yeah, did you see Blade Runner, the movie? Yeah, that's true story, in Peelander Island. Not island, Peelander Planet. It's called Replicant. He's our brain. We are just physical.
Heela: Ahh, and he is the brain, like on Transformers?
Kengo: See Power Rangers. I study a lot from Power Rangers.
Heela: Who is the best wrestler in the whole world?
Kengo: Ask Blue.
Heela: Blue, who's the best wrestler in the whole world?
Antonio Kazuki: Andre the Giant.
Heela: He's your favorite? Yay! What gives Peelander energy?
Kengo: In NYC, you can buy Peelander energy bar.
Heela: Ah, very cool.
Kengo: That's made from my spit.
Heela: Is it available everywhere or just in NY? 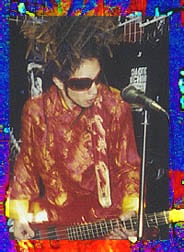 Kengo: If you want to buy, don't buy, just feel. [laughter] Go to temple and do meditation. Maybe you will buy my spit.
Heela: Is it expensive? If somebody is poor, can they get Peelander energy or only rich people?
Kengo: I have a class, and if you guys take my class, you can get that spit. I don't want to say free, but it's kind of free. It's called, Frisbee. Frisbee.
Heela: Ah-ha!
Kengo: Explain is very difficult, right?
Heela: Peelander-Red, do you have anything to say? No?
Kengo: He cannot speak but he is sexy. Always pheromone. Yeah, he knows. In here, good smell. In there, good smell. It's pheromone. All girls and all boys want to hug him. Except me. I have a kind of special medicine I take everyday. That is why I can not feel his pheromone. But Blue? he can feel sometimes pheromone. That is? uh? explain to these? uh? I can only explain like this: [Peelander-Yellow walks like a zombie into Peelander-Red.]
Heela: Wow! And what was your favorite place in California?
Kengo: My favorite place is Shahab's BATHROOM!
Antonio Kazuki: YES!
Kengo: He is my best friend. He is owner of GC Records. I don't like his house, but his bathroom and um? um? glory hole? is perfect! I like that smell! Thank you, Shahab!! [laughter]
Antonio Kazuki: Shahab's computer room. Shahab's computer room is the best! I can sleep well over there! Nobody bothers me! [laughter]
Heela: Peelander-Red, can your pheromones tell me where your favorite place is?
KO: Yeah. Shahab's balcony!
Antonio Kazuki: Everybody talk about Shahab!
All: Shahab!
Heela: What is nature?
Kengo: Baby is mother nature, but human being is not mother nature. 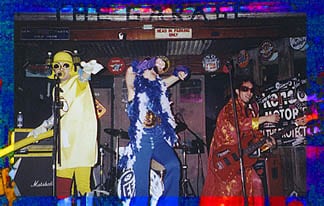 Heela: Is Peelander-Z? not mother nature?
Kengo: No Mother Nature. We are Father Nature.
Heela: Peelander-Z is Father Nature?! Okay, well, anything else about your recent visits to California?
KO: Venice Beach.
All: Yeah.
Antonio Kazuki: Better than heaven.
Heela: What was the funniest thing that happened to you on tour?
Kengo: This interview.
Heela: This interview?
Kengo: Yeah, it's funny.
Antonio Kazuki: The car crashed our Frisbee.
Heela: Anything else?
Kengo: Listen. This is very important! We are not human. We are not Japanese. We are not punk rock band! We are Peelander-Z. We cannot move except audience. Except your feeling. Except your meditation. Except your underwear. [laughter]
Heela: I won't forget!
Kengo: Okay!

Check out more Peelander-Z at: