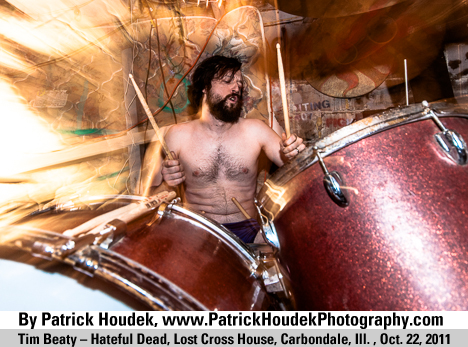 For a report on Tim Beaty’s death: http://www.wpsdlocal6.com/story/31624724/mother-of-slain-carbondale-man-tim-beaty-speaks-out

Tim Beaty, an innocent bystander was shot and killed, the tragic result of a fight in a neighboring house. Two people ran to Tim’s house for help to escape the gunshots. Tim shielded them by laying on top of them on the floor. He was fatally wounded.

If you’ve ever been to Carbondale, Ill. you may have seen one of the many bands that Tim was in: Hateful Dead, Cash Gal, 50:50, Dammit Boys, Bourbon Knights, Blast Radius, Conniption Fits, Back Stabbeth, Hippie Repellant, Birth, Lick My Butt and Balls, Venger, It Burns, The Touch, Bellyman, Plastic Jesus, and Creepy Smell.

Tim was an amazing drummer, loving, caring father, and one of the most genuine people I have had the chance to call a friend. He was the type of person who made you always feel welcome and comfortable wherever you were, whether he knew you or not.

Tim Beaty died saving the lives of two strangers. I want the world to know what his family and friends, Carbondale, and Lost Cross House already knew about him—Tim Beaty was a hero. RIP Mr.#1derful

A trust has been set up to help with Tim’s five year old son’s future. Donations can be made at http://beatytrust.com/