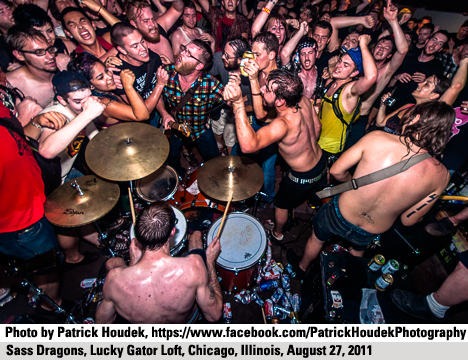 
After a one year break up, Chicago’s Sass Dragons reunited in August 2011 to play a benefit at the Lucky Gator Loft to help Minot, North Dakota’s Pangea House rebuild after flooding caused the evacuation of 11,000 residents. Sass Dragons are the most important band I’ve photographed. When I was still drinking, I spent most of my time at shows drinking in the bar and not paying attention to who was on stage.  I sobered up in 2005 but had a hard time going to see bands because I didn’t know what to do.  In 2009, I went to see the Sass Dragons and decided to bring my camera—the fun that the band and the audience (and myself) had showed me that taking photos of bands would be the way I could return to shows and not drink.  Sass Dragons new LP True Adventure comes out this spring. I recommend you get it when it’s released.