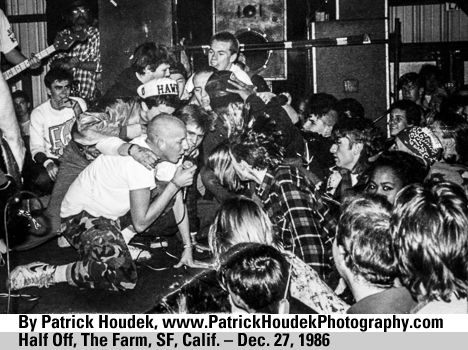 In 1986 when I was fifteen years old, I went to San Francisco on a little vacation with my mom and my younger brother. Somehow I convinced my mom to let me go to a punk rock show with seventeen bands playing at The Farm! By this time in my life I had already released some fanzines and compilation tapes, so through that I knew some people who would be there. It was the first time that I met Tim Yohannan from Maximum Rock’n’roll in person, previously only speaking with him on the phone. (Remember, this was 1986. We didn’t carry small computers in our pockets, or even cell phones. Now get off my lawn.) I also met Danny who had been doing artwork for the compilation tapes I was releasing. He was there with his band Fuck Shit Piss from Las Vegas, as they were about to embark on a tour with NOFX the next day (though all of NOFX’s gear was stolen out of their van that was parked outside of Mike’s later that night). I didn’t get to see all of the bands but it was definitely a great time that I’ll never forget.  Unfortunately, over the years I have lost many negatives from my younger years so this photo of Half Off is actually a scan of a 4” x 6” print. I wish I had more prints/negatives from my youth.