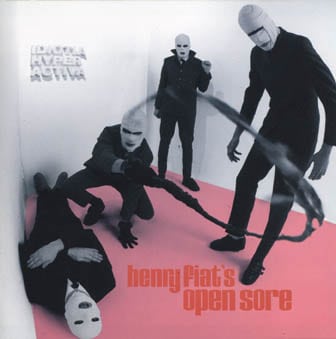 Parkinsons, The, Henry Fiat's Open Sore, and the Ulcers: Live at the Windmill in London By Benke

Picked up the local music guide to check out the upcoming week's aural offerings. Let's take a look at a random sample. Sunday night: Sting. Thursday night: Montell Jordan. Friday night: Cher. Wednesday night: Sting. Sweet fuckin' christ, is this Sherman Oaks or Swingin' London? I don't know what's more depressing, this week's selection of shows or the balance on my checking account (71.43 pounds, two weeks 'til payday). Gonna have to ration out the quids. Cher tickets are fifty pounds a pop, so I guess I'm gonna have to realize that dream some other time. Let's take a closer look at the other shows, maybe I missed somethi... hey, was that the word "drool" in one of the previews? The Parkinsons, and it's not just the word "drool" that makes this show the can't-miss event of the week, it's the phrase "droolin' geniuses." And all for a paltry three quids at my local pub. Cher can go fuck herself.

Gotta admit that I've never heard a single bar chord from any of these bands. Aside from the droolin' genius of the Parkinsons, the only thing I know about them is that the Ulcers played the Wild Weekend in Spain last November (sweet credentials, indeed) and Henry Fiat's wear masks on their heads. It's been a while since I heard some "new shit," and, yeah, HFOS hardly qualifies as new, but I plead gross negligence and fuckin' poverty, man. The other two bands have released fuck all, and it ain't like BBC radio has "Black Sheep" or "A Night on the Council Estate" in heavy rotation. So, without further ado, bring on the new shit, baby!

I walked in, the Ulcers ripped into their first song, and, whoooaa, that feels great! And it should, 'cause it's the Rip Offs tune "She Said Yeah." A fine start. Maybe I'll finally get through a show in London without becoming royally pissed off at 1.) the bands, 2.) the audience, or 3.) the horseshit transportation system that generally leaves me straaaaaanded far from home. So far, things were looking pretty good. It's tough to muster any hate for the Ulcers. Alex, the guitarist, played leads so hot it nearly blistered my fingers, while Eric, the drummer, beat his four skins and cymbals like a drunken caveman. The set continued with a selection of Buddy Holly-and-Teengenerate-inspired tunes that kept my head nodding in appreciation, and impeccably chosen covers of Devil Dogs and Real Kids songs that had me slappin' my knee and hollerin' "Hot damn!!" And they were wearing matching blood-stained shirts, to boot. The menacing punk rock snarl I use at shows had been replaced and I was smiling like a buffoon. This new shit is fuckin' sweet!

The bar seemed like a good place to pass the time before HFOS takes the stage, and it gave me a chance to order up another pint and briefly chat with Alex. Cool guy. Loves to talk punk rock, and we complimented each other's exquisite taste in music. The conversation is cut short when some mind-twisting, eardrum-piercing feedback slices through the bar, clears, and morphs into the opening song, a riotous combination of mutant hardcore and bizarro garage rock. My brain doesn't know how to respond - do the pick up change and start a pit, or grease my hair into a pompadour and start wearing shirts with horizontal stripes. The guys in Henry Fiat's Open Sore don't have to worry about greasing their hair 'cause it's covered by the masks they wear. Personally, I applaud their anonymity. Henry Fiat's Open Sore wear masks to symbolize the erasure of the individual in a culture starved for the next "rock star" icon to worship like some strung out, hackneyed golden calf. Or maybe it's because they're so fuckin' ugly. As it turns out, the singer doesn't even wear a proper mask, but a black pair of men's underpants held together by duct tape. Punk rock. The tunes have a strangely catchy element lurking underneath a goofy strain of Scandinavian violence. Like throwing Green Day and Euronymous into a blender with the lid off and watching the bloody mess spray all over the kitchen counter. The song titles? You know better than I do. The music? Gonzo Martian garage-core. The verdict? Weird, chaotic, and totally kicked my ass.

I start letting the spit pool in my mouth well before the Parkinsons take the stage in anticipation of their punk stylings. Eric (Ulcers, also a Parkinson) counts to four, the set starts and that's it, I'm brain damaged. This shit is twice as dumb as the Spits and every bit as glorious. Lead vocalist/guitarist, Alphonso, whipped through solos like an idiot savant, while the second guitarist, a fella of mysterious Asian origin I'll call Samurai Steve, flopped and spun like a high jumper at the Special Olympics. Eric had ditched the drunken caveman act, drumming instead like a drunken epileptic, and the bass player anchored the whole thing with the obsessive compulsion of an autistic child. It's a celebration of all things '77, all things Problematics, all things Stiff Little Fingers. Alphonso and Samurai Steve battled for stage-move supremacy in what can only be called a punk rock dick swingin' contest. Alphonso jumped, Samurai Steve lunged. Alphonso did scissors kicks, Samurai Steve stripped off his shirt. Alphonso jumped into the crowd and handed over his guitar to an audience member, Samurai Steve stepped up to the mic to sing backing vocals... I don't even know if the dude speaks English! The place was completely out of control. I even caught Down Syndrome from sticking my head too close to the speaker. But I wasn't the only one. I took a look around at a sea of cross-eyed, slobbering faces. Alphonso left the stage and the band played on for another few minutes, finally hitting their final chord. They started to pack up their instruments, but someone at the back was shouting, "One more! C'mon, one more!" It was Alphonso, spurring on his own encore. It was crass, it was shameless, and it was one of the most brilliant and stoopid thing I've ever seen. Long live the Parkinsons.

The show finished and I took the time to say goodbye to the people I've met. Hands get shaken. "See ya next times" were exchanged. I looked for Alex and, bless him, he was standing outside the HFOS van, talking about hammer on and different soloing techniques (I was right... the guys in Henry Fiat's are butt ugly). I made my way into the balmy spring night, and, like any self-respecting dumbass, got myself lost on the walk home.