I had received an email from Prank Records that this show was going to happen a couple of months prior. Originally, it was supposed to be in Santa Ana but the venue got shut down, so it was moved to this venue which has a smaller capacity. Luckily, Matt Average gave me the info a week before the show. The day before the show, I double checked to see if the show was still scheduled. I went to the Prank website and saw that the show was moving forward, but a little note that caught my attention said come early.

The day of the show, I took the day off from work and slept in. I figured that I needed all the energy I could get because these shows tend to run late. I picked up the Punk Rock Library (my brother) and arrived at the venue at 6:00 p.m. I pulled into the parking lot and saw no crowd. We exited and proceeded to the front of the building and no one was hanging out. I walked up four flights of stairs to see if the venue was open. Nope. I came back down and saw a guy ride up on his bike in a From Ashes Rise t-shirt. He informed us that the show would not start until 9:00 p.m. because of the neighboring businesses.

We had three hours to kill so we decided to first find a mailbox so my brother could send out some mail. After we took care of that, we walked towards MacArthur Park, which is surrounded by shops and restaurants. We walked a couple of blocks and I decided to get a cheap dinner at Yoshinoya to occupy some time. We managed to waste away forty-five minutes by eating and watching the colorful people that were loitering outside the restaurant, then we walked back to the venue.

People had started to congregate outside the venue. They must have also figured that this show might sell out. We informed people we knew that the show would not start until 9:00 p.m. So my brother and I talked to friends and got introduced to younger punks, who in turn asked us a ton of questions about records and bands. At that time, I found out that another band had been added to the bill. Shit! That made it six bands and the gig didn’t start until 9:00 p.m.!

I found and greeted Matt Average and conversed with him. He, too, had come early but found people he knew to pass the time. The door opened and we proceeded to climb up the four flights of stairs to get inside the venue. I paid my entrance fee and walked in. The venue is a community center by day and concert space at night. I’m glad this place is going strong because this summer will be full of bands touring.

First band up was Life in Exile, who I’m told are local. Never heard of them (and that’s not uncommon) but I met one of the guitarists in the parking lot. Nice guy. They played a strong set that was grindcore metal mixed with a crust feel. The vocalist did the cookie monster thing. The crowd appreciated the effort and cheered the band on. They must have played between five and seven songs, just long enough to get the energy pumping and short enough to not lose the attention of the audience. 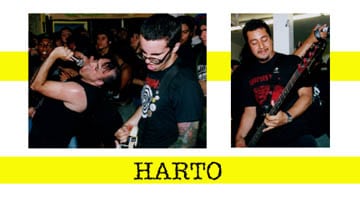 Harto set up next, which seemed like it took a half an hour. Harto consists of Martin of Los Crudos/Limp Wrist fame on vocals and the band formerly known as Kontraattaque backing him up. I was informed by a friend that the crowd was going to go nuts when the band started to play. Sure enough, the band hit their first note and the crowd erupted. Very similar to Martin’s previous bands in sound but more precise. The crowd was manic throughout the short set. I saw a couple of members of Paintbox in the pit pogoing as the kids encircled them in the slam pit. Pretty good set.

Ballast from Montreal, Canada set up and seemed ready to go, but technical difficulties plagued them right from the get go. The bass guitar was dead. Attempts were made to fix it, but it seemed like a failure. A loaner was acquired and plugged in. Then the amplifier was having problems. The club’s staff figured out that all the amplifiers were on the same circuit and so they plugged them into different outlets. Finally ready to play, the singer was not amongst them. She returned from a quick trip to the restroom and they proceeded to play their set. Mid-tempo to fast punk that has crust overtones. One thing I noticed in their set was the lack of energy I was feeling from their singer. Maybe it was fatigue from the tour, but it looked and felt to me like she was only going through the motions. The response from the crowd was positive but not as enthusiastic as impassioned as they were to Harto. 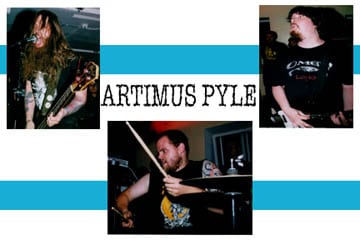 Artimus Pyle set up next. The first thing I noticed was that the guitarist was plugged into two amps. The second thing I couldn’t help but notice was that the bass amplifier was fucking loud. I knew right there that this was going to one loud-ass set. I haven’t listened to anything this band has done in the few years since their Civil Dead LP. All I remember was they were part of the powerviolence scene. What they played that night was far from that. They have progressed by adding more of a metal sound mixed in with the blast beats. Boy, were these guys playing heavy-ass shit, rocking out one minute and thrashing into the next. Much respect from me and the crowd, which was pressing forward en masse. They had the best sound of the night. 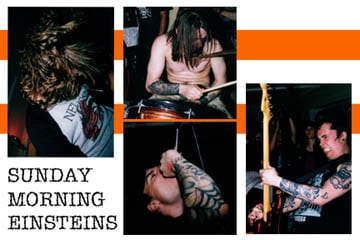 Sunday Morning Einsteins from Sweden played their brand of D-beat and the audience ate it up. It was getting really difficult trying to shoot pictures at this point of the night. The crowd was pushed right up to the belly of the band. Since this venue has no stage, people started to fly right into the band. It became hard to distinguish who were band members and who just came flying onto the drum kit. I got my pictures and was out of there. It was getting too hot and my body was now starting to ache. I watched from a distance and soaked up the experience. The set was a tad long, but I think only a few of us thought that. 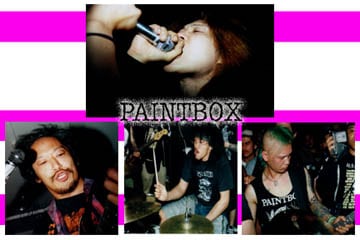 Paintbox from Japan was now about to play to close out the night. This was what I came to see and I was excited, but I had to wait. First they had to tune, then I think at this point the PA went dead, so I had to wait some more. Fuck! It was real late and I knew I wasn’t the only one that had to get up early and go to work. The PA finally got fixed and I think they ripped through two songs before guitarist Chelsea broke a string. More down time. He finally returned with his guitar re-strung and tuned again. They went forward with their song “Crybaby.” The place was absolutely nuts: bodies flying every which way, the singer engulfed by bodies showing appreciation, the bass player pinned in a stationary spot because so many people had converged around the band, and the drummer towering over the drum set as he banged away at rapid pace while maintaining a devilish grin. I felt that they were giving it their all. I recognized songs from their first LP, Singing, Shouting, Crying, through their latest, Earth Ball Sports Tournament. I think they played a total of eight songs but they gave it their all. Once their set ended, the band individually walked away to a separate room in the back of the venue.

I walked around to say my goodbyes and came upon the band in one of the back rooms. They were sweaty and looked completely exhausted. They laid on the floor looking defeated even though they gave a hundred percent to a crowd, with which they could not communicate to due to the language barrier. I broke out my Japanglish and thanked them for playing here in Los Angeles and that their set was incredible. We shook hands and I bowed to show respect and I walked away.

Having the chance to see three international bands in one night was incredible. This summer has a lot of international and national bands on tour coming through. It’s going to be hard deciding which ones to go to while I juggle, dealing with my so-called mature adult life. But one thing’s for sure – I will probably go to more shows than my one show every two months average.

JOY SUBTRACTION: Hate Will Keep Us Together: LP